Since the demise of Roe v. Wade there has been a consistent effort by the media to crush any notion that the Catholic Church is rational and loving. Even more so, the culture desires to highlight the Church as militant. It stole women’s rights and is violent, we are told.

Most recently, the Atlantic published a column titled, “How Extremist Gun Culture Is Trying to Co-opt the Rosary” by Daniel Panneton. The author uses some small bands of social media personalities who hold the rosary while they cite their Second Amendment rights as a way to demonize an entire faith. His claim is that the rosary is the hallmark of a faith that is in combat against the world order.

Panneton quotes Pope Francis who said, “There is no path to holiness … without spiritual combat.” His position is one that is worth investigating. If the pope, and countless spiritual writers and saints before him, cite the Catholic faith as a “war” then maybe its followers are only concerned with committing violence towards their opponents, he suggests.

The confusion of Panneton resides in his inability to see what the Catholic Church actually stands for and fights against. Jesus stands for peace, but he also says that “he has come to set the earth on fire” (Luke 12:49). He came to destroy the power of sin and death through his sacrifice on the cross. Furthermore, the resurrection was evidence of his victory. Those two lines, however, will cast divisions because Jesus asks his followers to hold to them as facts; capital “T” Truths.

If it is true, then what is the Church’s view of Mary and the rosary?

Mary’s role was to be the conduit by which God entered humanity. She said yes to God’s plan for her despite knowing exactly how it would occur or what it would mean for her. Her trust in God the Father is the model for all prayer. That is why the rosary is such a great weapon.

The United States Conference of Catholic Bishop (USCCB) uses these opening lines for its description of this universal prayer of the Church:

The Rosary is a Scripture-based prayer. It begins with the Apostles’ Creed, which summarizes the great mysteries of the Catholic faith. The Our Father, which introduces each mystery, is from the Gospels. The first part of the Hail Mary is the angel’s words announcing Christ’s birth and Elizabeth’s greeting to Mary.

This prayer is based on the words of the holiest woman of all time, but also of the most powerful human person. The Devil is afraid of Mary because she is the Theotokos, or God-bearer, who brought our savior into the world.

To be clear: the rosary is a weapon. It is a weapon that dispels the powers of darkness. Most Americans will laugh at this language. Meanwhile, when we watch the evening news or read the newspaper accounts of the multitude of evil actions we will be moved to say, “how can this be…what a horrible thing!”

We know that evil is real. We encounter its many forms (little and small) in our everyday lives. Catholics understand this as the absence of the good. The Devil promotes evil because he radically chose himself over God and desires to tear down humanity by convincing them to do the same. Rejecting God means denying the good and separating oneself from Him.

So, yes the intercession of Mary is a weapon. Not because she commits violence but because she gave birth to the Prince of Peace. We need her help like any child needs its mother when they are scared or in danger. A mother will do just about anything to protect her children and Mary does the same by becoming a continual presence for us all.

This Catholic, and all Catholics who take their faith seriously, will always stand up for their mother. Yes, because we love her and because she gave birth to Jesus, but also because she has done so much to guide us on our path away from evil and towards the Father.

Thomas Griffin teaches in the Religion Department at a Catholic high school and lives on Long Island with his wife and son. He has a master’s degree in theology and is currently a masters candidate in philosophy. Follow his latest content at EmptyTombProject.org 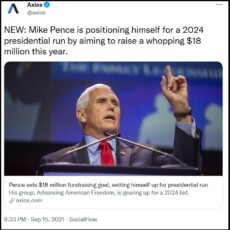 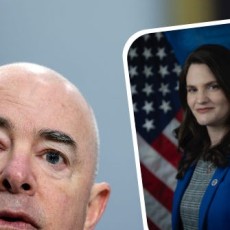 Mayorkas on Jankowicz: She Is a ‘Tremendous Authority’ We ‘Are Very Fortunate to Have Her’