Needless to say, many of Gumshoe’s 2020 articles had to do with Covid, the lockdown and vaccination. Then there were startling developments in the US presidential election. I’ll get to that below. First, to the year-end roundup of book reviews, obituaries, and “Mary’s travels” (some of which, you may suspect, are carried out simply to furnish material for the year-end wrap-ups!).

I reviewed Tom Muller’s book Crisis of Conscience, on whistleblowers, and Elias Davidsson’s America’s Betrayal Confirmed, on 9-11. Based on a sad notice from John Curnow, who lost his wife to Lyme Disease, I got a hold of Kris Newby’s Bitten and summarized it.  Lionel Tiger’s Men in Groups, written 50 years ago, proved to be a trove in regard to the issue of men in secret societies.

Tatu Vanhanen’s book on democracy – 40 years old – gave insight into the fact that the sharing of political power depends on wide distribution of knowledge and of property.  I also reviewed, slightly, Robert Dreyfuss’ Hostage to Koumeni, which says the US was the power behind the Ayatollah’s 1979 Revolution in Iran.

James Perloff pieced together quickly a refutation of the pandemic heist in his book Covid-19.  Klaus Schwab, of all people, came out with a book on the Great Reset, co-authored by Thierry Malleret. Elana Freeland produced a prize-worthy compilation of data in Under an Ionized Sky.

Having not followed EO Wilson’s career during recent years I was startled to find he had written two more knockouts – Genesis (2015), and The Origins of Creativity (2019), so I’ve begun a review series of them.

As for Andrew Urban’s Murder by the Prosecution (the Sue Neill Fraser case in Hobart), I won’t be able to cover it by December 31, but I highly recommend it! Gumshoe gave a favorable review to Shane Dowling’s two books that are primal screams against the Oz judiciary.

We had to send off a fine French historian, Robert Faurisson, followed, unexpectedly by our dear Fredrick Toben.  I wonder if both were “investigatable deaths” — given those thoughtful men’s unspokenness about the 1940s. News of the death of Judge Juan Torruella was a disappointment. He had voted to get Jahar Tsarnaev off of Death Row.

We also said Goodbye, sweet dreams, to our Gumshoe contributor Don Wreford, a glassblower from the UK.  I recall him once saying, in response to our yelling about child abuse, that for a lonely lad to have a man companion was not entirely to be despised….

The death that killed it for me was the uncalled-for execution of Nate Woods in Alabama. There was nothing to justify it.  “Black Lives Matter” should cast its eyes on that issue. Wow.

In September, my friend Trish Fotheringham, a leader in the torture-survivor community, told me she was going to go the assisted suicide route in Canada. This did not happen, though, and she died naturally – by closing her eyes – in December. Note: she has promised to do things for us when she reaches “the other side.”

My only trips during Covid were to a Trump, Jr, rally in upper NH, and to a lecture in Manhattan on the Great Barrington Declaration.  Plus a recent trip to Boston, in the nick of time before the Massachusetts gates closed.

The mission of that Beantown trip was to do some distributing of my book The Soul of Boston and the Marathon Bombing. I wore a sandwich sign that said “Ask me about Tsarnaev,” but about 85% of passersby on Boylston St were staring into their cell phones. Whatever happened to perambulating while NOT looking at your cell phone?

Oh, another activity of mine was running for the Republican nomination in the February presidential primary right here in the snows of New Hampshire. It was an extreme honor — you should try it. The registration fee was only 50 bucks. Trump got 129,000 votes and I got 925.

I am sorry if I was too much of the schoolmarm in monitoring the comments. All contributions are admired and appreciated. Some persons are particularly generous with links: Julius, Arlyn, Truth Vigilante, and Crisscross.  Simon’s English is coming up excellently.

Deb Hendry sent me the wonderful Craig Murray stuff during Assange’s disgraceful hearing in London. (In fact, there’s never a leaf nor blade too mean for Deb to notice, if it supports our Wikileaks compatriot. It is she who directs me to local USA rallies for Assange, including the one I went to last week with megaphone lady.)

Muzikmonkey Cherri Bonney, who sings in a nightclub in Perth, is the only Aussie Gumshoer awake at the right time (her 2am, my 11pm) for an evening chat. She mainly tips me off as to the latest medical critiques of the pandemic – herself being a licensed herbalist.

Rachel Vaughan, who keeps us informed of police issues, not to say tunnel issues, wrote an article for us on – wait for it – good cops. Yes, there are plenty of good cops, and wouldn’t it be nice if they would band together against the bullies.

Mal, Berry, Fair, Faithful Ned, and the Regulars keep Gumshoe going. Diane drops the occasional bomb. Terry told us how to grow trees. Fish shows us good music from Korea. Excuse me for not naming everyone, such as newbie Famanda.  I wish more commenters would provide their name, rank, and serial number.  That said, Commenter “56” has broken records with wisdom-delivery this year.

Covid and the Lockdown

You don’t really want to hear about Covid again, do you? My book Grass Court (available for download from the Books page at top of Gumshoe’s menu) covers the criminal aspects of the whole psy-op.

Felicity Hingston came in with a shocker article about Bill Gates’ involvement in the education scene such as “Common Purpose” in the UK, which is like the horrible Common Core curriculum in the US. Gates’ ego knows no bounds. Gil Ray produced so far four original articles on the climate. James O’Neill gave us many schoolins about Australia’s unnecessary kowtowing.

Dee, RWA and Kim covered the Ivermectin cure, and the hydroxychloroquine issue. That withholding of medication may prove the undoing of the Bozos. On the other hand, since when did the exposing of murder or manslaughter by The Protected Class ever have any consequences?

Um. Don’t forget my article entitled “The Committee of 23,” by which I mean Go form your own Grand Jury, what the hell are you waiting for, the Fairy Godmother?

Having seen Shaun Attwood give a TED talk, and also debate in the Oxford Union, I started to watch his Youtube vids, which led me to other souls who try to stop child-trafficking, namely, John Wedger (a London cop), Sonia Poulton (a journalist), Wilfred Wong (a lawyer), and two of Jeffrey Epstein’s victims, Maria Farmer and Anneke Lucas of Belgium.

We made “new friends” in regard to Covid. Namely, Dr Sucharit Bhakdi from Germany, Robert F Kennedy, Jr, head of Children’s Health Defense, Peggy Hall, a housewife in California’s Orange County, Serene Teffaha, an attorney at Advocate Me, in Melbourne.

Claire Edwards, the lady who received a report from French army officers, about the planned misuse of 5G, got in touch to assure us of her credentials.

Thanks to a local anti-war panel by then-candidate Tulsi Gabbard, I got to meet Harvard law professor, Lawrence Lessig. I can send his book on “net neutrality” to any tech-savvy person who’d be willing to review it for Gumshoe. (It is over my head, but Lessig’s Free Culture is within my grasp and is marvelous.)

Politically I became aware, in 2020, of some strong gals — Justice Amy Barrett, law professor Zephyr Teachout (author of Corruption in America), and attorney Sidney Powell (author of Licensed To Lie). As I myself, a dissident, am of the female species, I have long considered that it is easier for us to speak out than it is for males.

Around December 3, 2020, we picked up the hush-hush news that the recently Trump-pardoned Michael Flynn had organized a Kraken invasion of a CIA office in Germany. As well he should.  I then did a series called “After Frankfurt,” outlining the possibilities of a legal response, including secession as suggested by Texas’s governor Alan West. (Other series this year included one on “Don’t Steal Children” and one on “Buttar and Mikovits”)

On December 14 – ominously the day the Electoral College met – our valued covert contributor, G5, zinged us with “Manchurian Candidate Coup.” The plan, he says, is for a threat of martial law to begin on January 7, 2021, if all the accused don’t say “Sorry.” Following that date, they will be marched to Honduras to receive the Last Rites.

Related to this is the phenomenal growth of censorship in the media. I think it could toll the knell of parting day for GumshoeNews.com, and thus I am publishing this yearly wrap-up a bit early.  Much thanks to y’all for your love and your help during 2020 and indeed since December 2013. Admiration and affection, as ever, to Her Bossness, Dee McLachlan, founder and editor of this unique website (who is constantly working out of sight to rescue children).

Chinese military heading for Daru Island and the Torres Strait 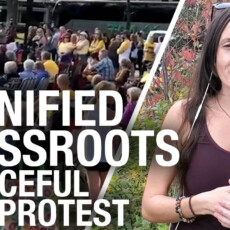 ‘This is dividing us all’: Group ‘Unified Grassroots’ holds rally against Saskatchewan vaccine passport 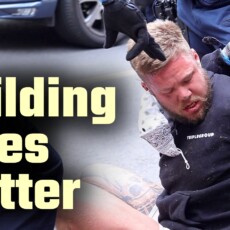 Building Lives Matter: It’s dangerous to be a tradie in Melbourne today