Resistance Democrats want you to be worried about voter intimidation. They also want you to know that they will not be going gently into that good election night if President Trump wins again.

It seems like threats of “creating serious disruption,” as one Resistance group expressed plans to do if Trump wins, might be a worrisome voter intimidation tactic. (If someone told me he would bring mass chaos to the streets if I voted for a particular candidate, I’d feel intimidated.) But the media and Twitter establishments are a lot more interested in a narrative where voter intimidation comes from the right.

Much was made of emails circulating, allegedly from the extremist group “Proud Boys,” threatening to “come after” people unless they cast their votes for Trump.

Here’s a threatening email my friend, a retired fed prosecutor, just received (she notified the FBI) telling her to vote for Trump. I find it ABSURD that Ratcliffe just said the voter intimidation campaign is designed to HURT Trump. By its very terms, it’s designed to HURT Biden! pic.twitter.com/lGN2apvEwN

The Proud Boys denied sending the emails, and government officials eventually deemed the emails to be from Iranian hackers. John Ratcliffe, U.S. director of national intelligence, suggested that the emails may have been actually a plot to “damage President Trump,” possibly by associating him with the Proud Boys or with voter intimidation tactics. Still, the “right-wing voter intimidation” narrative continued.

Voter intimidation, outdated election machines and mail-in ballot fraud all bring the security of the American election into question. So, what safeguards are in place to protect the results? https://t.co/7DMpoglNXK pic.twitter.com/R1N7ifbwKc

Also cited in the CNBC video was Nevada Attorney General Aaron Ford, who tweeted that Trump was encouraging “voter intimidation,” and threatened to prosecute anyone who tried it.

Trump also told “his supporters” to “go into the polls and watch very carefully.”

FYI — voter intimidation is illegal in Nevada. Believe me when I say it: You do it, and you will be prosecuted.

The Washington Post engaged in a hand-wringing exercise over “jeering sign-wavers” and “caravans of honking trucks.”

“There is an unmistakable effort underway to intimidate voters,” the Huffington Post blared, citing “bullhorns, honking cars with Trump flags, and shouting confrontations.” HuffPo and other outlets have also expressed concern that voters who possess the legal right to carry a firearm may intimidate other voters by being armed.

Democrats further erupted with cries of “voter intimidation” when a Miami cop casting his vote wore a Trump mask.

And after the Trump campaign captured on camera what appeared to be voters dropping off multiple ballots, not just their own, Pennsylvania’s attorney general (and the New York Times) were more concerned that the videotaping might be intimidating voters than about the apparent voter fraud.

Of course, this doesn’t mean that every incident of voter intimidation is imaginary. Incidents like one posted by Ajay Rochester, in which demonstrators took down her license plate number and told her “we got your plates, we got you,” are indefensible.

@FBILosAngeles this just happened to me and I’m terrified. Voter intimidation pic.twitter.com/AnzhrjzMVu

However, for every legitimate concern of voter intimidation, there appear to be a host of examples of the media crying “intimidation!” at either a false or exaggerated story.

After all, the “Proud Boys” email wasn’t from the Proud Boys. Trump never told his listeners to act violently at the polls, but to watch for instances of potential fraud. There is nothing inherently aggressive about legal and responsible concealed carry. Wearing a mask is hardly a threat to someone’s safety, and neither is videotaping to reveal sincere concerns about ballot integrity.

One looming threat the media doesn’t want to talk about, though, is that of anti-Trump “Resistance” and what they plan to do if Biden doesn’t win on election night.

A protest group called Shut Down DC is organizing an effort to “create serious disruption if Trump really tries to steal the election,” with a gathering in Black Lives Matter Plaza in Washington, D.C. on election night. The group, which also encourages similar disruptions in other communities, says they are “ready to do whatever it takes.” 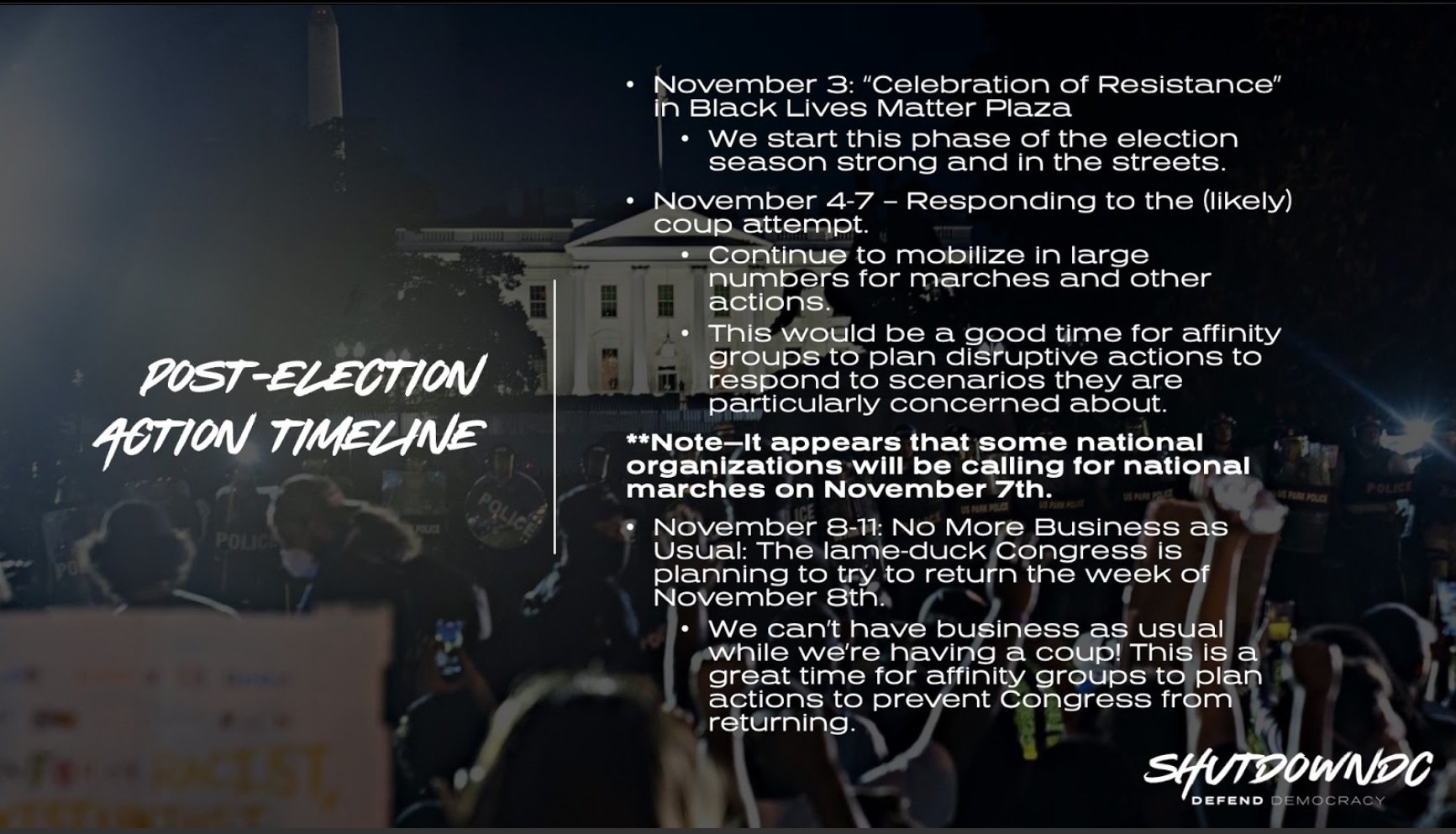 In the days following the election, Shut Down DC’s action plan promises “no more business as usual.” It threatens to seek out members of Congress “at the train station or the airports,” or “we can meet them at their homes.”

In a “Strategic Framework for Action Following the 2020 Election,” the group says: “We need to show that we’re ungovernable under a continued Trump administration. That means we need to be ungovernable.”

The plan includes “blockading the White House” as well as shutting down roads and government buildings. “It is our duty to ensure that Trump cannot steal the government, by using people power to prevent normal government business from proceeding,” the memo continues.

And their website suggests that they will not be satisfied with stopping Trump. “We are not seeking a ‘return to normalcy,’” it says. “Rather, we see this as the time to rise up against the current crisis and move forward to dismantle…interlocking systems of oppression.”

Shut Down DC isn’t the only voice calling for protesters to “take to the streets” and contest the election in any scenario where Trump wins.

Take to the streets. Contact your elected officials. Resist. The election isn’t over until Dec 19 #notmypresident #resist #usa #stillwithher

Ashley Dawson, writing for The Guardian, offered a how-to guide for “planning to defeat a coup” if Trump doesn’t leave office. It included strikes against an “illegitimate government authority” as well as asking other countries to “adopt an economic embargo of the US.” She also encouraged people to sign a “pledge of resistance,” directing readers to an article that explains such a pledge in terms of “acts of civil disobedience” and “large-scale disruption.”

Even where plans for protest haven’t been publicly announced, businesses and communities are preparing for violence. Stores like Bloomingdale’s are boarding up windows to prepare for looters, and everyone knows the looting and rioting seen this summer was not from Trump supporters.

Bloomingdales is already riot-proofing. What does that say about the American left? pic.twitter.com/IqQRMRjlCE

Rodeo Drive in Beverly Hills will be closed in anticipation of “election unrest.” The police department has also encouraged businesses to board up their windows.

In Washington D.C., some businesses are already boarded up. Mayor Muriel Bowser has told people “we do not advise parking or driving downtown” on election night. Such signs point to plans for post-election turbulence if Trump wins or the election is contested.

Of course, none of this justifies any kind of voter intimidation, from either side of the aisle. When actual intimidation happens, we should call it out. But while spinning false and exaggerated stories of right-wing threats, the left is ignoring perhaps the biggest threat of voter intimidation. Why? Because it’s coming from their own ranks. 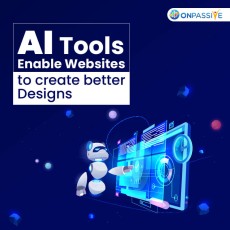 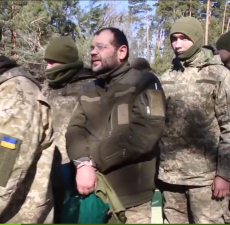 War Is Not for the Faint-hearted