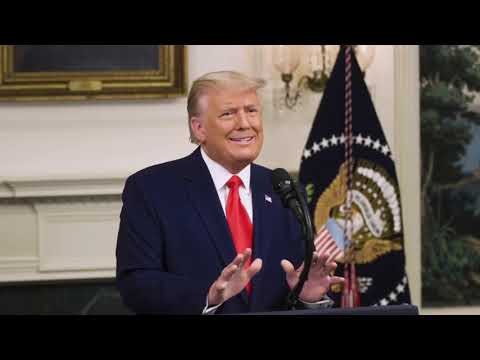 The Fourth Estate is still pushing the fake narratives, confirming its insecurity of the acceptance. Seventy-four plus million need to realize that the four hundred plus million small arms in private hands have a meaning. And better luck next election is frogshit of the highest order.

History will pass and the extraordinary events caused by the Democratic Party since its inception and their partners in crime from The Republican Party must all disappear. Again: if Trump behaved as the anticipated dictator; and for which he was elected in 2016; the pending strangulation of the entire West, would not be beginning to play out. Nice Guy never works. A statesman can be postured after the baseball bat has finished its use.

The USN defending Chinese trawlers and factory fleets vacuuming the essential food from within the waters of, for example; The Philippines, Thailand, and Vietnam; was hardly an envisaged reality, even months ago. I have previously written of this.

The Chinese Patagonia Intel Bases having been chased out by Trump’s Coast Guard and Marines, being returned under USN support, is hardly digestible. Relief for Australia on First Strike is not worth the alternatives and surrendering mountain ranges of natural resources.

The full history of what occurred in The US will be hidden. As the full history of what the US did to the world, is hidden. And of course: the empires of; Britain, Spain, Portugal, Germany et al, need to be dusted and read. The US economically owned and occupied by China, as a consequence of the biggest fraud ever perpetrated on the vast majority of its legal and rightful citizens. Protected to this time by a now-defunct Constitution and Bill of Rights, and an expunged or altered history.

If total bullshit concerning Osama bin Laden (CIA Tim Osman) can be manufactured, for herd consumption, like that of Che Guevara (CIA Ernie Lynch), and CIA; Snowden, McVeigh, Oswald, et al; it’s hardly a task for Intel to have Soros et al, join Amschal and brother Jacob. As with the window flying bankers and many other suicides and accidents. The Intel Wars are always there.

An occupation and regime change bought by China, with the very funds stolen from The US Government. An ongoing fraud from years past. Not as a consequence of planning, and certainly not approved by the constituency of the US, but flowing in the tide of the deeply corrupt, protecting exposure and justice.

The Obama-Biden Fraud that destroyed the West. If both characters had been correctly and publicly executed for their litany of crimes: the current prospects for the West would not be threatening today. Spare me the moralized legal waffle.

Deep State would have dissolved up its own orifice, with collaborators burning the carpets, running to declare their cohorts for the same crimes, and sounding the chimes of their own innocence. The US was threatening Third World Status from the time Clinton (Bill Blythe) was frauded into office. The GWB optic was GHWB revisiting through Cheney.

Obama (Soetoro) was a demonstration of the meaningless nature of the US Presidency under Dem Deep State Control. He never met any of his election promises. Not even the closure of Camp X-ray. He read meaningless speeches on meaningless outings. And now his select puppet crew is to reinfest The Executive. A nation from then occupied by the immovable government elite classes.

Corrupt SCOTUS is afraid to act to protect the US because CJ Roberts has lied to The AJs. He is protecting his being a recorded Epstein client. Trump was given those files. Name him, expose him, and remove him from the bench. Very clear. Very easy. Pump SCOTUS to eleven, push out Ginsberg, Kagan, Sotomayor, and Bryer. Appoint hardcore Conservatives. Forget the tenure rules and put Ted Cruz in as CJ. He can resign later if he wants to be President. Forget the bullshit theatrics of Committees. One hour and done. Senate confirms after lunch. Suck it in. What was the value of the Thomas, Gorsuch, Kavanaugh, and Barrett hearings? A process. REALLY?

None of The Dem deceptions would ever have held water, had Trump acted correctly. Forget him being advised. He was voted to office in 2016, to act. Not sit there and weigh the frogshit from Experts and Advisors.

SCOTUS AJs afraid to be the ones to stand and save The US, because they might be yelled at by a handful of meaningless and have their dignity and legacy besmirched, is beyond pathetic. But how typical of gutless, intellectualized, and moralized classes.

Durhams’ true report was delivered to Trump; by intel; in July 2020. He should have published and acted on it. He had ample to act on the earlier Horowitz Report. Richard Grenell was cream on the cake. Haspel, Sessions, Barr, Esper, and Wrey should never have been appointed. Move Holman back to ICE. Merge ICE, DHS, CBP and TSA. Flush out Sanctuary Cities. Appoint Whitaker as US AJ with full control of The FBI. Appoint Grenell as DNI, and merge NSA and CIA under DNI, and close NSC.

If permanent heads requires confirmation hearings, forget the useless and bilious theatrics. Appoint Acting Heads, and tenure them if needed.

Telling Wray and his Seventh Floor Mafia they will be sacked after 3 November 2020, would never have them act honestly. They would hardly investigate Election Fraud, nor make recommendations to DOJ for prosecutions.

Trump knew Soetoro was not American born and illegally occupying The WH. Throw him out, then Biden for his history of criminality. He knows now that Harris was born in Jamaica, and would be ineligible. Why was it hidden. Gabbard hates them both and only needed to be unleashed.

The Mail-in Fraud scenario has been known since The Carter Report. Was it going to disappear on 3 November 2020? Were Deep State dwellers posturing independence going to be a sudden truthful reality? On what planet are public servants not insular and corrupt. The very DNA of the animal.

When Trump correctly denounced McCain III in two interviews, he backed away from the stupidity of defensive interviewers by saying; it was his own opinion. NO. Name the treacherous and release The Songbird File. When it was time to release The JFK File: RELEASE IT. Name them all; Dems and GOP. Not distribute the pathetic apologetic D5 Letter.

If The GOP was to be reformed: DO IT. Preferred to the divisive future.

Turn lose the enemies of government, not expert government protectors and apologists. Bring out the countless destroyed and wronged by government. The fox in the coup will never find a wrong. Trump was elected because he was NOT a government animal.

When the institution is protected, all is lost.

2016 was never about Trump. It was The People reclaiming what is theirs. That was the endgame, not 2020.

(For those unaware: In one of my many past lives, I was a government advisor on; Government, Defence, and the Environment. I resigned as I was correct (proven) and the opponents in the camp were wrong (proven). Damage is politically glossed away, rewritten, and hidden. But the effects can never be hidden.)

I have been writing and talking of geo-politics; I understand I may have invented the term, from the early 70s. The problems are always the same. They are traceable to elitist government; currently termed Deep State; and their cohorts in crime, of corporatism, camouflaged as capitalism, or free enterprise. The controlling devastations being the deceptions of regulation, taxation, the control of resources, energy, and the mediums of exchange (currencies and credits).

The study of unadjusted history was always an essential tool to prevent repetition. The discipline that must always be substituted and removed; the first signal. The end game being the propagandized Fourth Estate and the theatrics of The Fifth Column, leading to the well prepared fraudulent election; and the game is lost.

The security of pervasive Deep State evolved and enabled by the myth of the Left-Right Paradigm. Partly correct in cursory definition, but insufficient, due to the corruption that further articulates through Fourth Estate Propaganda. The manipulation of the led herds in the alleged democratic process.

Trump is merely a symbol. All the media is six people. As all seventeen Intel agencies advising of The Russian Hoax concerning Trump, was one person.

The devastation of The People’s Economy. The subjugation and economic enslavement of The People. The denial of True Rights. The Real, Class War. Not even the illusion of Proletariat-Bourgeosie converted to deceptions of Race and Gender.

The infection metastasizes internationally through the protected lead of the multinational corporation. In turn, led by The Usual Suspect International Banking Consortia. Through which; government-sponsored wars are waged, genocides conducted, puppet governments installed, resources looted, and lies propounded and enforced.

The lies are absorbed, as absurdities of; saving the people, national security, and the mythology of the Left-Right Paradigm, swallowed ad nauseam by the lifelong inculcated and relentlessly tutored.

The current hidden civil war in America affects the freedoms of the entire alleged Free West. The hidden Sino-US War continues and led by the equally unknown; Intel Wars, Energy Wars, Food Wars, and Drug Wars. I write of these matters: the realities of which are tragically predominantly lost, even on the otherwise aware.

The current tragedy lateralized deception of reality in America concerns an overwhelming democratic vote of awareness and support of the representation by Trump, being defeated by deception and propaganda. The recent election is the greatest democratic fraud ever perpetrated on The People. America becoming The Third World, owned puppet regime, envisaged since the gradual strangulation and hidden lootings began from the days preceding 1775.

On 14 December 2020, The Electoral College meets to certify the Chinese Regime Change of The West, or not reach the 270, based on the various litigations currently underway. Which signals the surrender of The Executive.

On 5 January 2021, the GA runoff election; with already over a million fraudulent Dem-Chinese mail-ins at hand; signals the surrender of The Senate.

On 6 January 2021, The House meets to endorse the Regime Change, if the prior events pass as swallowed by the manipulated. Alternately: The Constitutional Vote will be put. Whereby Trump theoretically holds the required states. But by extension of the activities to date, the loss of The West will be played in that theatre.

Trump missed the call in 2017 and lost The West.

If Trump and The People should by chance recover The US: the forthcoming term needs a very dramatic change of agenda, or the game compounds, as it had from 2016. 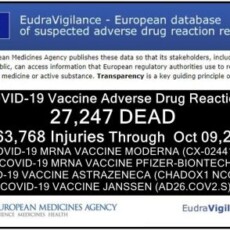 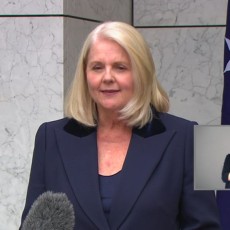 ANR Founder Asks All Australians To Punish PM Scott Morrison at the Next Federal Election and Opposition Leader Albanese Who Would Be Worse. It Would Be Un-Australian To Vote Liberal, Labor or Greens Ever Again and Condemn Australia to Hell