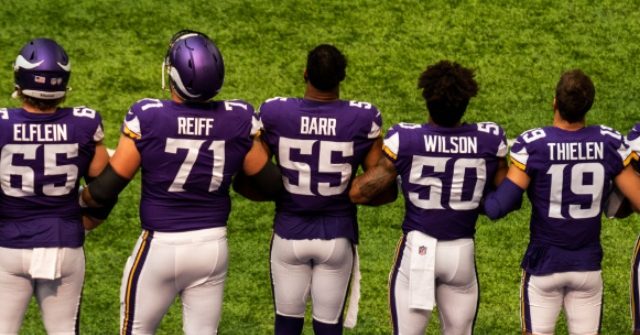 The Minnesota Vikings used a portion of their pregame ceremony to pay tribute to George Floyd, a Minneapolis man killed in a police-involved incident in May, and honor his family.

Vikings players stood shoulder-to-shoulder at the goal line as the public address announcer spoke about Floyd, with his family attendance.

“George’s family members were captured on the Jumbotron, standing together, as everyone looked on,” TMZ Sports reports. “The big screen also displayed snapshots of some of the many memorials/murals that have popped up around town in the wake of his death.
“The Vikings’ remembrance was one of the more stand-out ones across the leagues as games ramped up — other teams had more scattered approaches to addressing social justice.”

The NFL’s ratings took an enormous hit during their opening game on Thursday night. The numbers were down over 16% from last year, and were the lowest opening night numbers the league has seen in 10 years.

Lawyer up and get out!

Washington County First in Arkansas to Declare Itself ‘Pro-Life’