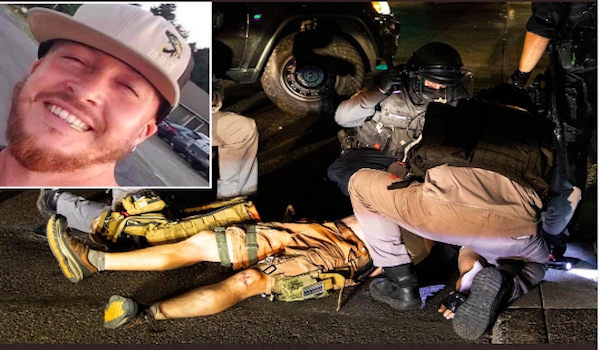 In a newly released video, details of the murder of Jay Bishop were uncovered and showed the brutality of his killing.

Targeted for Being a Trump Supporter

As the streets of Portland, Oregon continue to be an epicenter of ANTIFA violence, Bishop was murdered in the streets for being a President Trump supporter.

There was not a fight or incident that spurred the violence. He was simply gunned down because he was carrying a Blue Lives Matter flag.

This is Jay Bishop.

He was a good American that loved his country and Backed the Blue.🇺🇸

He was murdered in Portland by ANTIFA.

Jay, we will never forget you.

In a now newly released video, a voice can be heard saying, “We got a Trumper right here” just before gunshots rang out.

The latest evidence just builds to the mounting case that Bishop was indeed hunted down because he was a Trump supporter.

It sounds like someone is shouting, “We got a Trumper right here” just before the shots are fired and the man is killed. pic.twitter.com/MMCnp5iwtj

Witness Relays the Murder of Bishop

The person who filmed the incident relayed what went down:

“On August 29th, 2020 I went into downtown Portland Oregon to film the Trump 2020 Cruise Rally that began at Clackamas Town Center and Passed through the heart of Downtown Portland. When the cruise rally was over I made my way toward the justice center to see what was happening over there before going home. I was done filming but I was still rolling my camera when some commotion happened in the street next to me. A man loudly says “hey we got a couple of them right here” and I hear two gunshots in succession. I raise my camera as I flee for cover. I instantly step into the inlet entrance of a business to the right of me and turn and point my camera to the street. Then I see a dead man lying in the street 10 feet in front of me. I was like a deer in the headlights and in almost total disbelief. It was over as soon as it started. I was just standing there filming a man that I instantly presumed to be dead as his friend tended to him as well as street medics in black block who were on the scene. I continued to film and then left the scene when police cleared the entire block to declare it an official crime scene. I am shocked, horrified and deeply saddened by this act of hatred and bigotry that has played out tonight within my proximity. I have been concerned about the political violence in the streets of my home town for just over 4 years now. I have been deeply concerned about someone being killed at a rally or protest for about the last 2 of those years. Tonight that concern became a reality and it took place right next to me in the blink of an eye. The tension in Portland is at an all-time high now and it breaks my heart. Elections are coming and it feels like it is only going to get worse. God help us all.”

As Election Gets Closer, Violence Grows

As the 2020 presidential election gets closer, violence and chaos grow. Jay Bishop is an example of the extreme hate some of ANTIFA members have for Trump supporters and it shows they will stop at nothing short of murder at times. 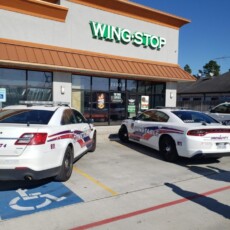 Man arrested after threatening to shoot everyone at a Wingstop because his food wasn’t ready, deputies say