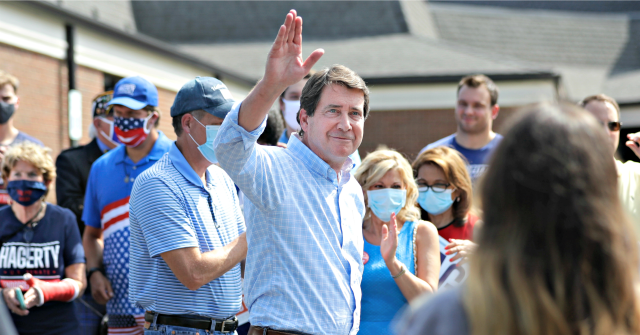 Breitbart News was granted exclusive access to Hagerty’s campaign headquarters war room, where dozens of staffers in a local hotel conference room shouted out county-by-county results as they rolled in from across the state. For the first half hour, not a single county went Sethi’s way. and cheers were so loud that campaign staff closed the door so those in the hotel lobby more than 30 yards down the hall could not hear them.

An all star lineup of Hagerty’s biggest supporters joined him here on election night, including Sens. Marsha Blackburn (R-TN) and Tom Cotton (R-TN) as well as Rep. Chuck Fleischmann (R-TN).

“Hey, everybody, a major reason for tonight—Sen. Blackburn,” Ward Baker, the top adviser for the Hagerty campaign, yelled to the room when the senator joined the war room staff shortly after 7:30 p.m. as Hagerty opened a major lead over Sethi in the early returns.

Baker gave similar heroes’ welcomes to Cotton and Fleischmann, as well as to Breitbart News—whom he told the staff in the war room is the nation’s leading conservative publication and a “must-read.”

“I haven’t seen a war room like this ever,” Fleischmann said as the staff shouted out county results as they were confirmed.

“Neither did Mitt Romney,” Baker joked in response–a not-so-subtle shot at the 2012 GOP presidential nominee and now U.S. Senator from Utah who has been the subject of Sethi attacks against Hagerty over the course of the campaign. Sethi repeatedly falsely claimed that Romney endorsed Hagerty–Romney did not, as even the New York Times confirmed this week–and Hagerty even returned a donation that Romney’s PAC attempted to give Hagerty early in the campaign.

The president personally recruited Hagerty, a longtime Trump loyalist, to leave his post in Japan and come back to run for the vacant Senate seat left open by the retiring longtime Sen. Lamar Alexander (R-TN). Trump even endorsed Hagerty several days before he officially announced his campaign, making Hagerty his first endorsement of the cycle in 2020—and one that the president has worked hard at over the more-than-a-year since ensuring Hagerty was successful. Trump has done multiple virtual events with Hagerty, and his son,Donald Trump, Jr., campaigned with Hagerty in Tennessee before the coronavirus pandemic upended in-person campaigning. He’s flooded social media with pro-Hagerty messages, and sent his top surrogates in on Hagerty’s behalf. Trump had been planning to hold a campaign rally in Tennessee with Hagerty, but since he is not doing the rallies anymore during the pandemic, the president held a series of tele-townhalls with his former ambassador to Japan, including one the night before the election. Vice President Mike Pence also endorsed Hagerty, meaning the White House—and Trump and his team—were all in on this one.

It paid off. Thursday’s results saw Hagerty win by more than 13 percent when the race was called by the New York Times and the Associated Press. When Baker and others announced to the room that the Times had called the race for Hagerty, the war room erupted in applause.

Hagerty’s message was nearly identical to Trump’s message: Tough on China, law and order, rebuilding the economy, and sending a fighter to Washington.

“We’ve got a great message to deliver,” Hagerty said in his last Breitbart News interview before the election on Breitbart News Tonight on Tuesday night. “We stand for law and order, getting our economy back again; we’re going to stand up against China, we’re going to deliver strong conservative Tennessee values to Washington where they are desperately needed.”

But Hagerty’s win was not always certain. Sethi, a doctor who had moved back Tennessee after time in Massachusetts, had been on the upswing against him the past six weeks or so, surging in polls and picking up endorsements of key U.S. Senators like Sens. Ted Cruz (R-TX) and Rand Paul (R-KY). Radio host Mark Levin also endorsed Sethi, all fueling energy behind the candidate who portrayed himself as the “real conservative” in the race.

But, then, a Breitbart News investigation uncovered that Sethi’s entire senior campaign team were Never Trump political consultants. His campaign chairman, his campaign manager, and his general consultant all had made a number of disparaging comments about the president. At the same time, two of Trump’s top allies in the U.S. Senate—Sens. Tom Cotton (R-AR) and Marsha Blackburn (R-TN), the freshman senator and top conservative from here in Tennessee—rode in behind Hagerty, endorsing him, bolstering his credentials over Sethi. Cotton campaigned with Hagerty in Tennessee a couple weeks ago, and Blackburn aggressively campaigned for him statewide after her endorsement. Cotton’s Super PAC blanketed Tennessee airwaves with ads helping Hagerty across the finish line.

While this happened, a vicious ad war hit the airwaves in Tennessee. Video of Sethi defending Obamacare when he was a Massachusetts doctor surfaced, only to be used in campaign ads against him. The political attacks against Blackburn on behalf of Democrat Phil Bredesen in 2018 from Sethi’s allies at nonprofits in Tennessee also resurfaced, still fresh wounds to Republicans in the state. Sethi’s refusal to denounce his colleagues disproved the narrative that he would always stand up against the left, something Blackburn reinforced in an interview with Breitbart News.

At the urging of Cruz, Sethi’s team attempted to frame the attack ads against him as the “establishment” coming after him. It fit Sethi’s pre-crafted narrative of being an outsider crusading in against the vaunted “establishment.” But Hagerty and his team, with the president’s, Cotton’s, and Blackburn’s help, successfully countered this framing with framing of their own: That this was a race between economic nationalist populists and a different establishment, the old guard conservative establishment.

Hagerty spent the majority of the campaign showing off his credentials on battling the Chinese Communist Party, “China is a concern for America and has been for a long time,” he said on Breitbart News Tonight on Tuesday. “For too many years, we’ve seen administrations both Democrat and Republican look the other way while China has continued to mount its aggression. It’s not until 2016, during that presidential race, did I hear a candidate say he was ready to stand up to China. That was then-candidate Donald Trump. I figured it was time for me to step up and volunteer. I volunteered full time for six months for then-candidate Trump. Then as you know I went in to help seed the cabinet. Then when it came time to talk about what I could do to be helpful President Trump decided to send me to Japan to be the U.S. ambassador there, to be the senior American there, because that is the cornerstone of how we deal with Asia. We have more military based in Japan than anywhere else in the world outside of America. We’re dealing with China. We’re dealing with North Korea. We’re dealing with major threats in that region and China is by far the biggest threat we’re facing. It’s not just economic, it’s militarily and diplomatic as well.”

Then, in the final weeks of the campaign as the coronavirus pandemic receded and the focus shifted to the economic recovery, Hagerty began adding a “Made in America” focus to his message.

As Breitbart News reported from Clarksville, TN, a couple weeks ago, as Hagerty campaigned with Cotton touring local stores:

In an interview on election day with Michael Patrick Leahy of the Tennessee Star Report on local radio in Nashville—Leahy is also a Breitbart News contributor—Hagerty echoed the “made in America” message.

“We have to get our economy going back again,” Hagerty said. “And we’ve got to get our supply chains back from China. We can no longer be dependent on China for medical supplies. For antibiotics and high technology. I know where to hit China where it hurts. I want to make Made in the USA the theme of America again.” 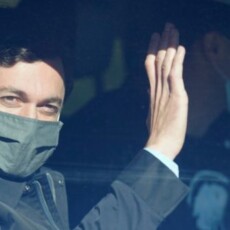 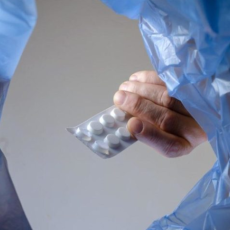 Take Note of This Pfizer Recall