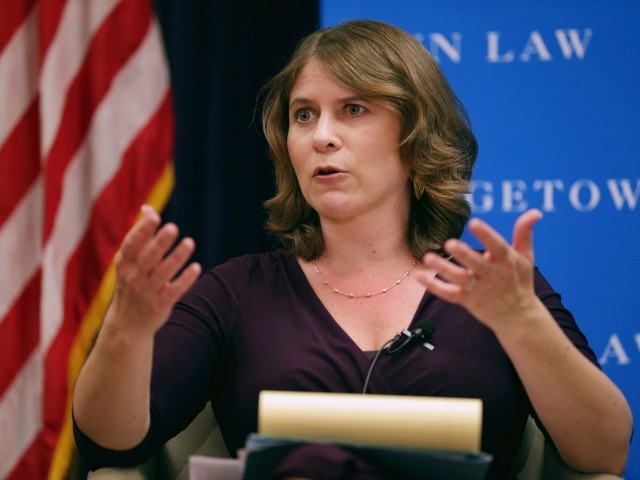 Shortly after President Donald Trump’s 2016 inauguration, a co-founder of the Transition Integrity Project (TIP), a group that recently “war-gamed” potential outcomes of the 2020 elections and transition, outlined varying ways to oust Trump including declaring him mentally unfit and carrying out a military coup.

Garnering lots of media attention in recent days, TIP co-founder Rosa Brooks has written numerous op-eds summarizing TIP’s 22-page report, which concluded that anything less than a Biden-Harris landslide will spark catastrophe, including “violence in the streets” and a “constitutional impasse.”

Just days after President Trump’s inauguration, Brooks penned an article advocating for his swift removal from office, even going so far as to suggest the military not follow orders.

A Schwartz Senior Fellow at New America, a think tank funded by billionaire George Soros’s Open Society Foundations, Brooks served as a senior adviser at the State Department during both the Obama and Clinton administrations.

In what seems to be a deliberate tactic, Brooks repeatedly questions Trump’s mental stability throughout, claiming that the president’s first week in office “has made it all too clear: Yes, he is as crazy as everyone feared.”

Brooks, who is not a mental health professional, offered no evidence for her psychological evaluation other than citing policies she disagrees with:

Nope. In his first week in office, Trump has made it eminently clear that he meant every loopy, appalling word — and then some.

Brooks goes on to list four ways to oust a “crummy” president:

Regarding her suggested military coup, a creative Brooks proposes scenarios that she fears Trump might try to play out:

What would top U.S. military leaders do if given an order that struck them as not merely ill-advised, but dangerously unhinged? An order that wasn’t along the lines of “Prepare a plan to invade Iraq if Congress authorizes it based on questionable intelligence,” but “Prepare to invade Mexico tomorrow!” or “Start rounding up Muslim Americans and sending them to Guantánamo!” or “I’m going to teach China a lesson — with nukes!”

When it comes to invoking the 25th Amendment, Brooks argues for appealing to the “ambitions” of Vice President Mike Pence.

“Surely Pence wants to be president himself one day, right?” Brooks writes. “Pence isn’t exactly a political moderate — he’s been unremittingly hostile to gay rights, he’s a climate change skeptic, etc. — but, unappealing as his politics may be to many Americans, he does not appear to actually be insane. (This is the new threshold for plausibility in American politics: ‘not actually insane.’)”

The same day that Breitbart News reported on her essay, Brooks posted on Twitter, “Breitbart is after me, claiming I’m urging a military coup. How do I know? Sudden uptick in illiterate, obscenity-laced tweets and emails.”

Breitbart is after me, claiming I’m urging a military coup. How do I know? Sudden uptick in illiterate, obscenity-laced tweets and emails.

Four days later, Brooks tweeted, “And Then the Breitbart Lynch Mob Came for Me!”

And Then the Breitbart Lynch Mob Came for Me! https://t.co/M55S5yI5KP

Given her clear animus toward Trump — having advocated for his removal shortly after his inauguration — it is hardly surprising that Brooks is now spearheading TIP’s 22-page report, titled “Preventing a Disrupted Presidential Election and Transition,” which concludes that only a Biden win can prevent large-scale chaos.

As Breitbart News reported, Brooks recently penned a piece in the Washington Post based on the TIP conclusion that only “a landslide for Joe Biden” assured a “relatively orderly transfer of power.”

President Trump has broken countless norms and ignored countless laws during his time in office, and while my colleagues and I at the Transition Integrity Project didn’t want to lie awake at night contemplating the ways the American experiment could fail, we realized that identifying the most serious risks to our democracy might be the best way to avert a November disaster. So we built a series of war games, sought out some of the most accomplished Republicans, Democrats, civil servants, media experts, pollsters and strategists around, and asked them to imagine what they’d do in a range of election and transition scenarios.

A landslide for Joe Biden resulted in a relatively orderly transfer of power. Every other scenario we looked at involved street-level violence and political crisis. [Emphasis added]

Brooks detailed “four scenarios” the project explored: “a narrow Biden win; a big Biden win with a decisive lead in both the electoral college and the popular vote; a Trump win with an electoral college lead but a large popular-vote loss, as in 2016; and finally, a period of extended uncertainty as we saw in the 2000 election.”

TIP, as Brooks writes, envisions a clear Trump win playing out as such:

In the “Trump win” scenario, desperate Democrats — stunned by yet another election won by the candidate with fewer votes after credible claims of foreign interference and voter suppression — also sought to send rival slates of electors to Congress. They even floated the idea of encouraging secessionist movements in California and the Pacific Northwest unless GOP congressional leaders agreed to a series of reforms, including the division of California into five smaller states to ensure better Senate representation of its vast population, and statehood for D.C. and Puerto Rico.

Brooks’ TIP report has set the stage for grim scenarios this coming November.

Even a “clear Trump win” is deemed possible only through “foreign interference and voter suppression” and will not be regarded as legitimate.

With progressive groups preparing to mobilize for a “political apocalypse” full of violence and chaos, and Hillary Clinton urging Joe Biden not to concede the election “under any circumstances,” the dire “forecasts” of the left are set to become self-fulfilling prophecies.

San Diego County Supervisor: Migrant Kids Are Getting In-Person Instruction, so Should our Students