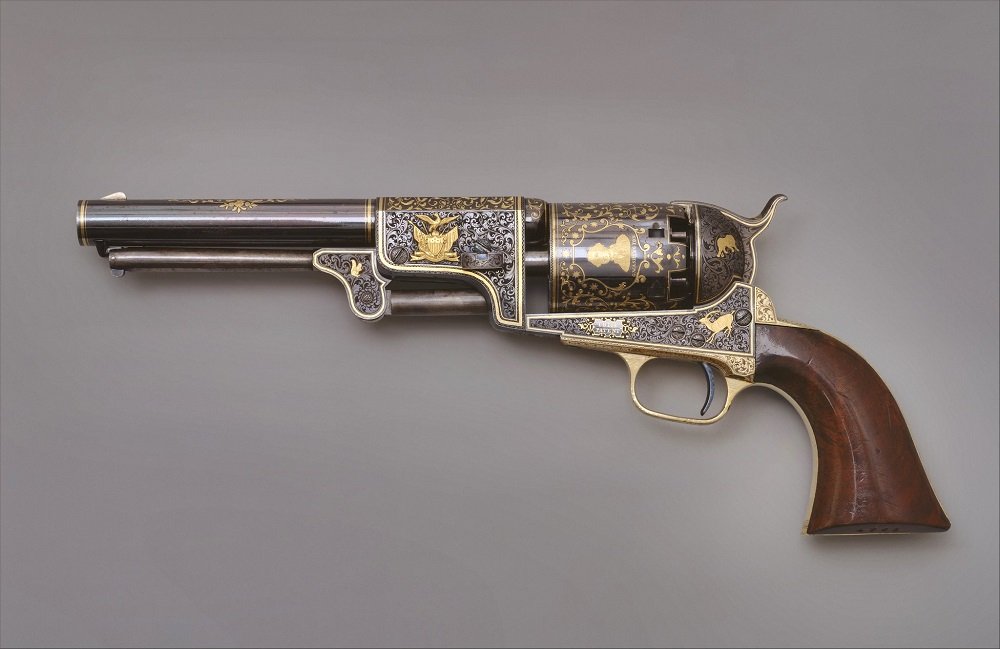 During the 1830s and ’40s in the United States of America, Samuel Colt invented and patented a handheld machine that changed the nature of personal liberty for human beings around the world, and transformed the lives of his fellow Americans. The sign you see in bars and barbecue establishments (I just saw one stuck to a booth seat at Dreamland BBQ in Tuscaloosa last week) is as dead accurate as a Colt sight used to be: “God created men, but Sam Colt made them equal.”

Or, as Colt put it in a letter to an English associate: “The good people of this world are very far from being satisfied with each other, and my arms are the best peacemakers.”

When you are in possession of five (or six) rounds of pure mayhem that you can carry at your side and hold in one hand, the long eons of arbitrary oppression of the physically weak by the physically strong has ended. A 98-pound 13-year-old girl can shoot and kill a 400-pound bear attacking her. Or a six-foot-tall, musclebound rapist. Or a spindly secret policeman come to cart her and her family off to the gulag.

“The past is the one place in American life where we can lower our weapons and consider our common heritage,” Jim Rasenberger says in the opening chapter of Revolver: Sam Colt and the Six-Shooter That Changed America, a new biography of Colt. Unfortunately, Rasenberger doesn’t follow his own advice.

Revolver is replete with ahistorical apologies for Colt’s sins against present-day leftist orthodoxy. But Rasenberger’s greatest weakness is to downplay the great consequence of Colt’s invention. It made men equal. Rasenberger becomes authorially apoplectic at times that revolvers were used against American Indians and Mexicans, for example—as if only Americans of European descent ever pulled a trigger.

Delving into “Revolver” is like reading a biography of Isaac Newton in which the author notes all the man’s bizarre personal quirks and Masonic mysticism, but only cursorily covers the part about him inventing calculus, discovering gravity, and describing the motion of the planets. On the other hand, somewhat akin to Newton’s, Colt’s life was a fascinating whirlwind of brilliance, duplicity, and genuine weirdness, and Rasenberger does a good job of laying out the details.

Samuel Colt announced his appearance in the world of men and commerce with bang. It looked like he was going to be exiting his prep school at Amherst Massachusetts rather precipitously—whether on his own or with the school’s help—so one evening just before his emancipation (or expulsion), he and a fellow student snuck into the nearby town square, loaded up an old cannon with gun powder, and shot it off—repeatedly. They woke up the school and the town—including Emily Dickinson’s father, Edward—and kept at it, until they were run off by the locals also impressed with the young man’s ingenuity.

The incident was a metaphor for Colt’s next 25 years. Colt went at life, work, inventing, showmanship, lobbying, feuding, and the hard-won acquisition and profligate spending of vast sums of money with both gusto and vengeance. He died in his forties of horrific complications of gout, leaving behind a loving wife, a daughter, and at least one, and probably two, illegitimate children. He didn’t officially acknowledge either as his own, but took care of both monetarily, and with intermittent fatherly attention.

He had one brother who went mad and drove Colt’s London factory into ruin, and another brother, the author of a text on mystical accounting, who killed his printer with an ax, chopped him up, loaded the pieces in a crate, and then attempted to ship the dismembered body to Georgia.

Furthermore, Sam Colt was a great friend and early backer of Samuel Morse and his telegraph, and, due in part to his attempt to save his brother from hanging, made a bitter enemy of John Quincy Adams. He also spent years trying to sell the U.S. government on a scheme for blowing up boats of gunpowder with insulated electrical cable.

That was all to come. After leaving school, the young Colt shipped out on a small merchant clipper to India, where he served before the mast.  He was 16 years old. Rasenberger uncovers good evidence that Colt ran afoul of the rules midcourse, and was flogged for his troubles. After spending some time in Bombay taking on trade goods, the “Corvo” turned around and headed home.

Sometime on that return voyage, according to what would become the central creation myth of his gun, Sam Colt gathered a few pieces of scrap wood and pulled out the $1 jackknife that Samuel Lawrence had given him in Boston. It would have been a Sabbath afternoon, his chores complete and no missionaries to pester him with their sermons and religious tracts. He found a quiet corner of the ship and began to whittle. His inspiration, as the story goes, was either the wheel that steered the ‘Corvo’ or, more likely, the ship’s windlass.

Colt had carved the model for his revolver. Upon his return to the United States, Colt decided the sailor’s life was not for him. He went to work in his father’s paint factory, assisting a nascent research and quality control department. There Colt learned chemistry, electrical physics, and how to produce a remarkable gas which, when inhaled, induced peculiar and distinctive effects upon its subjects.

Yet the idea to create his new type of gun was never far from Colt’s mind (and schemes). After a year in the plant, Colt struck out on his own. He engaged a gunsmith to produce prototypes of the revolver, both in long-gun and pistol varieties.

To pay for this highly skilled labor, Colt set out on one of several trips over three years. The first would take him down the East oast, around the southern seaboard, up the Mississippi, and back home via the Ohio Valley. When Colt reached a city, he would rent out a performance hall, put an ad in the local paper such as this one:

The subscriber respectfully informs the Ladies and Gentlemen of Boston and vicinity, that he will administer the Exhilarating or Nitrous Oxide Gas Tomorrow Evening, the 8th inst. at the Basement Hall of the Masonic Temple, the exhibition to commence at 7¾ o’clock, precisely.

These laughing gas tours funded the initial stages of Colt’s revolver. All the while, Colt was dreaming up refinements, and his gunsmith was implementing them (and grumbling about slow payment), and working, with the aid of family and family connections, to ensure he had a patent on his idea.

Colt’s making of a buck may have been a trifle on the shady side, but his guns worked, and worked better and better as he relentlessly tinkered with the design. Rasenberger finds the perfect summation: “The industrial historian Charles R. Morris sums up the paradox of Colt pithily: ‘One half of Sam Colt was the buncoing fabulist, the walking bonfire of other people’s money, the drinker and carouser; the other half was a truly gifted inventor.’”

Ironically, Colt spent much of his short life wining and dining military men and politicians in Washington City to get revolving rifles and pistols adopted by the U.S. Armed Forces. His only real success in doing so was with the Navy’s marines and an expected war with France. But no wars came and the Navy made no great use of them.

In fact, Colt’s revolver was never to be primarily a military weapon. Despite all Colt’s lobbying in the 1840s, one Army report after another came to essentially the same conclusion: “‘The capacity of continuous fire is an advantage which they consider as greatly overrated.’”

Eventually, several of the Navy revolvers ended up with a semi-official band of fighters and lawmen called the Texas Rangers. These guys did know what to do with them. Before Colt’s revolver, a man on horseback had to dismount to effectively fire, and reload, his musket or singleshot pistol. After the revolver, a horseman suddenly gained the fire power of at least five armed men (the original Colts were five-shooters), or ten with two revolvers. Reloading was not easy at first, but became less difficult as refinements came along—and was a huge improvement over pouring powder and ball into musket muzzles and ramrodding them down.

The Colt revolver was destined to become the gun of the common man of America, the great equalizer. It took a while for this fact to dawn on Colt, but when it did, he capitalized on his market ceaselessly with advertising, beautiful engraving (something even the first Colts carried), and, importantly, by sending complimentary sets of pistols to influencers far and wide throughout the 1850s. Colt, the laughing gas showman, knew how to work an audience.

Despite the turmoil of his life, Colt’s design became better and better. His guns were accurate, safer (although never entirely secure from “chain fire,” the misfire of additional chambers), and more rugged than anything on the market. They were portable and—most importantly—affordable.

What made the last possible was Colt’s genius factory manager, Elisha Root, who was said to have an almost spiritual connection with industrial machinery. He was a man with a temperament totally unlike Colt’s: “straightforward, unassuming, honest, and prudent—all qualities Colt lacked but recognized as valuable,” says Rasenberger.

Colt’s Hartford works were not quite Henry Ford’s assembly line yet, but the Root-managed armory was a prototype. The guns pieces came out remarkably uniform and were assembled from great bins of mostly-interchangeable parts.

Few great men remain great to their biographers, and Rasenberger too frequently falls into the biographer’s trap of expressing distaste for a subject in whose inner thoughts he has grown overly steeped, and in whose time he has failed to live. One is often left wondering who Rasenberger believes his reading audience might be. He’s the one who chose to write a book about the inventor of the revolver, after all.

I can assure him that audience isn’t made up of academic historians, who will automatically revile his “great man” methodology. Furthermore, there is not enough science and engineering in the book. Despite his title, Rasenberger’s discussion of the mechanics of the handguns and revolving rifles, the genius of Colt’s design, and the brilliance of his refinements is anemic. Yet his amazement at Colt’s short life comes across as genuine. How could it not?

Colt’s quirky, irascible individualism suggests Colt might have had an inkling of what he had accomplished in bringing his revolver into being. It was a basic transformation, on par with and preparing the way for the automobile and the personal computer.

In inventing and promoting the revolver, Colt transformed American society and seeded the soil for the triumph of democracy in the coming century, where massive attempts to transform humans into interchangeable parts in the machinery of state were met by resilient individualists who understood in their bones that a bullet could end a Hitler or Stalin just as easily as it could a common man.

Samuel Colt invented, patented (worldwide), and manufactured to high standards at relatively low cost a personal weapon that placed the individual in a rough equality with the state, where, despite frantic attempts to annihilate that individual, he remains to this day—in no small part thanks to Samuel Colt. 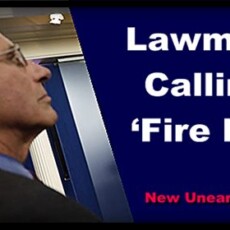 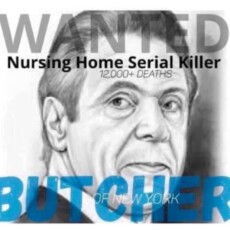 The Democrats’ Leftward Lurch Is Sinking Joe Biden In Florida