When hearing talk of Democrats’ war on blacks, some may think of the 92 percent of black homicide victims murdered by other blacks mainly in Democrat-run cities. Others may ponder the 300,000 black babies killed yearly in the womb with the approval, sometimes tacit, sometimes more overt, of many white liberals. Yet there’s another front in this war, one more recently opened and far more insidious.

When President Trump early this month ordered an end to mandatory “Critical Race Theory” (CRT) training in the federal bureaucracy — which sometimes involved compelling white male employees to write letters of apology to “marginalized” people — he was, predictably, called a “racist.” But if ending this destructive program is “racism,” well, then whatever racism is, we need more of it.

Of course, such privilege exists like unicorns do. But insofar as blacks and other non-whites will believe it does and that they’re (perhaps fatally) disadvantaged, we should ask: How does making people more hopeless and bitter improve their prospects for success?

It gets far, far worse, however. The trainers also claimed that “rugged individualism,” “a can-do attitude,” “hard work,” and “striving towards success” reflected “white male culture,” which they said leads to “lowered quality of life at work and home, reduced life expectancy, unproductive relationships, and high stress.” I guess slacker bums who can’t put food on the table (when they have a table) have no stress.

But this Loser 101 indoctrination isn’t limited to Sandia or even the bowels of federal buildings. It’s in schools (and corporations) as well, where teachers are being told that hard work, planning for the future, and punctuality are “white norms.” Try telling that to Asian-descent Americans, who, apparently, are just like white people — only more so.

(One race theory activist, Glenn Singleton, does tell them that, saying that Asian-descent Americans are a “majority” group because of their “white” habits. Honorary white people, I guess.)

Ironically, this is the very attitude black educators lamented, and combated, just a generation ago. Back then it was slacker, criminally inclined black youths (usually driven by jealously, mind you) accusing their higher achieving peers of “acting white.” This was universally recognized as destructive social pressure that militated against the embrace of success-breeding habits. Now the attitude has been lent the respectable veneer of educational theory and the endorsement of academic authorities.

This does violence to an already struggling black underclass. It’s man’s nature to glom on to convenient excuses, and American blacks have long been fed a diet of low expectations for performance and high expectations for copping out. Now pseudo-intellectual social engineers are exacerbating the problem.

In “It’s Time to Quit Operating on CP [Colored People’s] Time,” Holmes writes that our “challenges with starting or arriving on time are often dismissed with humorous complacency.” “You know how we are,” is what he hears from other blacks. “But this week,” he wrote, “CPT totally stopped being funny to me.”

After relating instances in which he’d been bitten by CPT, he stated, “This hurts to admit, but I often pause when considering doing business with black people or black companies, based on my experiences.”

Now, will activists call this black man a “racist”? They’ll more likely brand him an Uncle Tom. No amount of name-calling alters reality, however, which is this: We can institute all the affirmative action, quotas and set asides we want, but the last 50 years have proven that the wider society’s indulgence cannot compensate for a community’s fundamental virtue deficits. The pork barrel can keep people on a certain plantation, though.

Of course, as we’ll often hear regarding social ills, “It all starts at home.” It’s well known, too, that fatherlessness/family dissolution plagues the black community today, with 72 percent of black children born out of wedlock.

Now the Democrat Left aims to worsen this problem, too, with Black Lives Matter openly stating that one of its goals is to “disrupt the Western-prescribed nuclear family structure requirement.” In this structure’s place, BLM wants blacks to care for each other, as it writes, “collectively.”

A popular race-hustler notion, the aforementioned Glenn Singleton called “collectivism” a black norm while BLM co-founder Patrisse Cullors admitted, “We are trained Marxists” (collectivists) in a 2015 video. And in pushing socialism on blacks, they are in a way working toward equal outcomes — for the vast majority of the 100 million souls thus far murdered by Marxist governments have been white or Asian.

The notion that blacks somehow require a different economic/moral framework (collectivism) than whites do gets at a truth: The CRT’s largely unrecognized philosophical foundation (philoso-babble, really) would have to be the relativism sweeping our time. The idea is that, as Louis Farrakhan put it, “A White Man’s Heaven Is a Black Man’s Hell” (I believe Hitler expressed a similar sentiment, by the way); that whites, blacks, Hispanics, Asians, women, etc. all have different “needs.”

The truth, however, is precisely the opposite. As Reverend Jesse Lee Peterson, who is black, has put it, the black community’s problem is “immorality.” Often called sin, this is a universal plaguing everyone and causes most human woes. Now, the remedy for immorality is, obviously, morality. To be specific, if morality came in a jar, on the ingredients label would be virtues.

These are “good moral habits,” examples being hope, honesty, charity, fortitude, justice, temperance, prudence, chastity, patience, kindness, humility and love. Another virtue is diligence, which relates to punctuality and industriousness. Yet another is forgiveness, which forestalls the bitterness and hatred that can cause a person to focus on tearing society down instead of building himself up.

The point, however, is that virtues aren’t “white” or black, Hispanic or Asian, male or female.

They’re also universals. All people need them to live happy, prosperous, moral lives — there are no exceptions.

Anyone counseling against virtue — as the race activists do — is the worst enemy a people could have. In fact, this is why Rev. Peterson called BLM “worse than the Ku Klux Klan”: It’s doubtful that even the most clever white supremacist would think to, or could, convince blacks that virtue is vice.

But Democrat-enabling, and enabled, organizations — teachers’ unions, BLM, academia, etc. — are doing just that. And why? Well, since poor, dependent people vote Democrat by wide margins, a cynic could think that the Democrats would want to make the poor and dependent class as large as possible.

What’s for sure is that virtuous people rarely support leftists. So if I were an amoral modern Democrat lusting after power, I’d peddle vice, too.

This email address is being protected from spambots. You need JavaScript enabled to view it., follow him on Gab or Parler (preferably) or Twitter, or log on to SelwynDuke.com.

When is a Veto Not a Veto, When Kristi Noem Needs The Political Cover 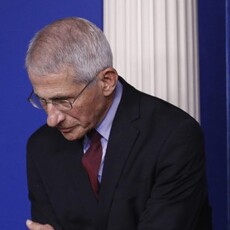 Fauci: I Don’t Think U.S. Made Mistakes with Lockdowns