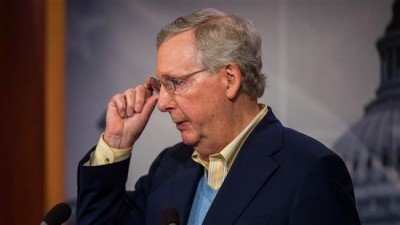 The new filing (pdf) with Virginia’s State Corporation Commission—an independent regulatory agency that oversees political action committees—names Duncan as one of three directors of the Senate Leadership Fund, a massive super PAC that has spent nearly $18 million in support of Senate Republicans thus far in the 2020 election cycle.

According to the Center for Responsive Politics, the Senate Leadership Fund has recently received multi-million dollar donations from casino magnate Sheldon Adelson, Blackstone CEO Stephen Schwarzman, and other right-wing billionaires.

Duncan—who raised more than $400 million for the GOP during his tenure as chairman of the Republican National Committee from 2007 to 2009—was nominated to the USPS Board of Governors by President Donald Trump in 2017 confirmed by the McConnell-led Senate in August of 2018. A McConnell spokesperson told the Louisville Courier Journal last month that the GOP leader recommended Duncan to Trump.

“As a businessman, a public servant, and a dedicated mentor to young people, Mike is an outstanding choice to help oversee the world’s largest postal organization,” McConnell said in an April 2018 Senate hearing considering Duncan’s nomination.

News of Duncan’s current high-level role on a super PAC closely linked to McConnell added fuel to growing concerns that recent USPS operational changes imposed by Postmaster General Louis DeJoy—a Republican megadonor to both McConnell and President Donald Trump—are a ploy to influence the outcome of the November election in the GOP’s favor and, ultimately, privatize the Postal Service.

The sweeping changes—many of which DeJoy vowed to suspend last month in the face of immense public backlash—have dramatically slowed package deliveries across the nation and intensified concerns about the timely arrival of mail-in ballots in November. Last month, Democratic lawmakers urged the Board of Governors to remove DeJoy over his mail service changes and conflicts of interest, but members of the board—which unanimously appointed DeJoy in May despite his lack of USPS experience—have remained supportive of the postmaster general.

“Can the GOP’s takeover of USPS be any more blatant?” economist Robert Reich asked Monday in response to the new filing.

“The corruption is bottomless,” added Renee Graham, a columnist for the Boston Globe.

During a House Oversight Committee hearing last month, Rep. Raja Krishnamoorthi (D-Ill.) called attention to Duncan’s ties to the Senate Leadership Fund and American Crossroads, another major Republican super PAC. Duncan confirmed that he on the boards of both GOP organizations while also serving as chairman of the USPS Board of Governors.

In today’s @OversightDems #USPS hearing I pointed out that while serving as the Chairman of the USPS Board of Directors Robert M. Duncan is simultaneously serving on the board of two Republican Super PACS: @Senate_Fund and @AmericanXRoads. pic.twitter.com/gbJUGM9Yvi

Lawmakers and progressive commentators suggested that McConnell’s close relationship with the top official on the USPS Board of Governors could have something to do with the Republican leader’s refusal to consider House-passed legislation providing $25 billion in emergency funding for the Postal Service. In a tweet last month, McConnell dismissed widespread concerns about mail slowdowns across the U.S. as “overblown conspiracy theories.”

“Is this why the Senate Majority Leader refuses to pass legislation to protect the USPS?” Rep. Mark Pocan (D-Wis.), co-chair of the Congressional Progressive Caucus,  asked Monday night in response to the new document.

Advocacy group Swing Left tweeted late Monday that the fresh details surrounding Duncan’s ties to McConnell further highlight the need to oust the Kentucky senator, who is set to face off against Democratic challenger Amy McGrath in November.

“What a coincidence—the USPS chair’s other job is at Mitch McConnell’s super PAC, while Mitch kills Postal Service funding to secure our elections with his ‘Senate Graveyard,’” the group said. “We have to take his gavel away this November.”

From Common Dreams: Our work is licensed under a Creative Commons Attribution-Share Alike 3.0 License. Feel free to republish and share widely. 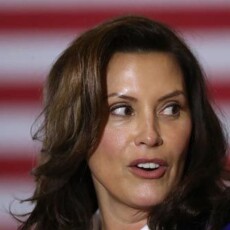 Gretchen Whitmer Changes Story, Drops Original Claim She ‘Traveled at Her Own Expense’ on Private Jet