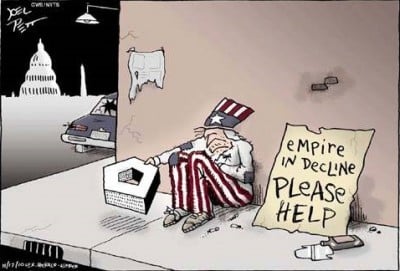 “It took Russia twenty years to return to being a normal state with a vibrant economy, powerful armed forces and self-respect, but Russians still had a nation, even in those horrifying times of the 1990s so-called “liberal” experiment.

“The United States doesn’t have a nation anymore. Not even close, and if the magnificence and power, through visual representation, of the nation’s cathedrals are any indication, the United States has become as a tasteless boxy post-modernist mega-church preaching prosperity gospel. It is fake, it always was, and it cannot stop disintegration.”

– Andrei Martyanov, from Disintegration: Indicators of the Coming American Collapse   [1]

In the previous instalment of this two part series, we painted a portrait of an American Empire that was constantly failing in its military engagements in, really, all of its pursuits, from Afghanistan and Iraq, to Libya and Syria, to Venezuela, Bolivia and even the crucial flash-point now in Ukraine. In a nutshell, the U.S. has lost ground in every military venture it pursued since the turn of the century.

But a closer look inside the Union itself reveals multiple difficulties plaguing the world’s one remaining Superpower on several fronts.

According to the Survey of Mothers with Young Children, 40.1% of the mothers with children 12 and younger reported household food insecurity since the on-set of COVID-19. That’s up 170 percent over food insecurity numbers in 2018! [2]

In the 1960s, manufacturing made up 25% of the U.S. gross domestic product. That number shrunk to 11% today. Five million American manufacturing jobs have left the country since the turn of the century. [3]

Plus the United States has run up a debt just shy of 29 trillion dollars – WAY higher than its regular production in the manufacturing sector (2.158 trillion) and its provision in services (13.1 trillion)![8][9]

These daunting statistics are mentioned in the book Disintegration: Indicators of the Coming American Collapse written by military analyst Andrei Martyanov. It has been described as part 3 of a trilogy of books on the fading dominance of the mighty turned frail American eagle. As Pepe Escobar put it in a recent book review:

“Martyanov, in meticulous detail, analyzes the imperial decline thematically – with chapters on Consumption, Geoeconomics, Energy, Losing the Arms Race, among others, composing a devastating indictment especially of toxic D.C. lobbies and the prevailing political mediocrity across the Beltway. What is laid bare for the reader is the complex interplay of forces that are driving the political, ideological, economic, cultural and military American chaos.” [10]

This simple nearly 240 page read lays out how the U.S. got where it is today, and also lays out why it is so fundamentally incapable of recovering given the current state of education, media, and the band of incompetents prevailing within its elites. We got in touch with Martyanov this week and benefited from his unique understanding in this special edition of the Global Research News Hour!

Andrei Martyavnov served as an officer on the ships and staff position of Soviet Coast Guard through 1990. In mid-1990s he moved to the United States where he currently works as Laboratory Director in a commercial aerospace group. He is a blogger on the US Naval Institute Blog and at Reminiscence of the Future. He is author of Losing Military Supremacy, The (Real) Revolution in Military Affairs, and earlier this year, Disintegration: Indicators of the Coming American Collapse. He is based near Seattle Washington.

The Global Research News Hour airs every Friday at 1pm CT on CKUW 95.9FM out of the University of Winnipeg. The programme is also podcast at globalresearch.ca .

Other stations airing the show:

CIXX 106.9 FM, broadcasting from Fanshawe College in London, Ontario. It airs Sundays at 6am.

WZBC 90.3 FM in Newton Massachusetts is Boston College Radio and broadcasts to the greater Boston area. The Global Research News Hour airs during Truth and Justice Radio which starts Sunday at 6am.

Tucker Carlson: ‘Healthy Young People More Likely to Be Harmed by Vaccine, Than by COVID’