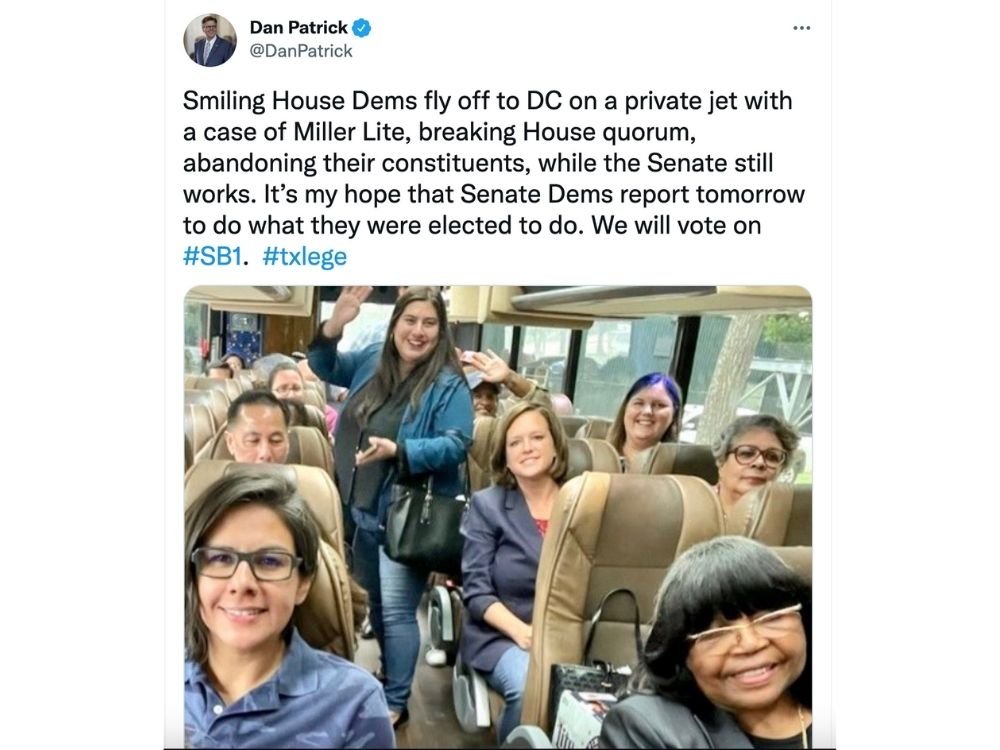 Texas Democrats’ attempts to stop a Republican-led effort to secure elections in the state came to an official end this week when the state House advanced the bill 79-37.

For weeks, the state House Democrats paraded around Washington, D.C., more than 1,000 miles away from their constituents to stall a return to their duties in the state legislature. During that time, several of the tantrum-throwing, vaccinated lawmakers contracted COVID-19 after partying on a maskless flight out of the Lone Star State.

They also likely infected several Nancy Pelosi and White House aides during their protests in the nation’s capital city, where the Biden administration openly praised their demonstrations.

“I applaud them standing for the rights of all Americans and all Texans to express their voice through their vote, unencumbered,” Vice President Kamala Harris said.

The Democrats first fled the state in July as a last-ditch attempt to protest a GOP bill that was reintroduced in a special session by Republicans who wanted more election security for mail-in ballots, including voter ID. Many of them took to social media to explain that their swift exit from the state on private jets was a “sacrifice” in their fight against “voter suppression” that they claim was orchestrated to oppress minorities.

Now that legislators met a quorum to advance the bill, the legislation will either go to the state Senate for a vote, which previously passed a separate version of the legislation, or will go through conference committee to undergo changes.

Republican Gov. Greg Abbott, who strongly opposed the Democrats’ partisan scheming, pledged to sign the election integrity bill into law after it makes its way to his desk.

“Election integrity is being debated on the House floor today. This legislation will make our elections process fair & uniform. Thank you @SenBryanHughes & Rep. Murr for fighting to make it easier to vote & harder to cheat. I look forward to signing this bill into law,” Abbott tweeted.

Election integrity is being debated on the House floor today.

This legislation will make our elections process fair & uniform.

Thank you @SenBryanHughes & Rep. Murr for fighting to make it easier to vote & harder to cheat.

I look forward to signing this bill into law. 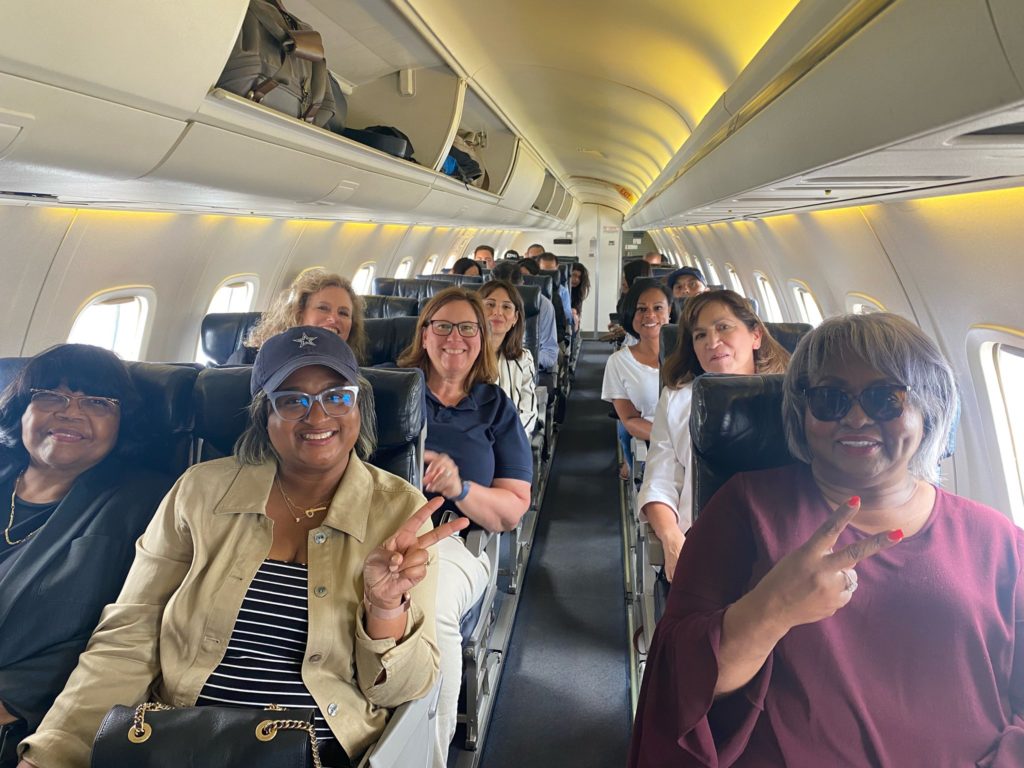 Texas Republican Gov. Greg Abbott called a special session starting July 8 to consider legislation left undone when House Democrats walked out in the closing hours of the regular session in late May. Texas special sessions last 30 days. Only five days later, they were gone, flying out on a couple of private jets stocked with beer — sans masks, as required by the FAA.

In addition to amendments to Texas’s Election Code in an omnibus bill, the governor asked lawmakers to try again on a crucial bail reform bill aimed at reducing the likelihood of well-heeled but high-risk defendants making bail, only to kill or injure others shortly after release.

Outnumbered by Republicans in Austin 83 to 67, the Texas House Democratic Caucus decided to head to D.C. to publicize its opposition to election integrity bills, fundraise, and drum up support for federal legislation that would nationalize election law by imposing California law as a template on the nation — banning meaningful voter ID, expanding mail balloting while eliminating fraud safeguards, prohibiting proactive voter list maintenance, and mandating same-day voter registration with no checks for eligibility to vote.

But the Democrats’ trip hasn’t turned out as planned.

And the attention Democrats were hoping for soon turned sour, with Texas’s major newspapers, none of whom are friends of Republicans and have had little good to say about their election integrity bills, have nevertheless weighed in against the walkout. By two-to-one, Texas voters disapprove of the quorum-busting as well. Even national Republicans have piled on, with this tweet from Missouri Sen. Josh Hawley’s press secretary being emblematic.

Closer to home, Travis County GOP Chairman Matt Mackowiak said the quorum-breakers had “…engaged in performance theater for weeks claiming Gov. Abbott was putting lives at risk by reopening the state economy and waiving the statewide mask mandate, then they flew to DC on a private jet stocked with Miller Lite without masks, in violation of FAA rules, and now this farce turned into a super spreader event.”

But there are signs the Democratic solidarity is breaking down. With chairmanships, seniority, and even district boundaries on the line in a redistricting year, powerful Democrats are wavering while those seeking to move up sense an opportunity. A week ago, 80 House members were on the floor. As of Tuesday, 90, including several Democrats, were present. It’s a classic “prisoner’s dilemma” situation. If another 10 Democrats show up, the Texas House will have a quorum and can resume consideration of bills, leaving the other 50 holdouts with nothing for their efforts — except for perhaps being redrawn out of their districts by the Legislative Redistricting Board later this year.

When the Democrats do return, they will be asked to vote on bills that would bring mail-in balloting up to the standard for in-person voting by asking for ID in the form of writing a driver’s license number, or state ID number, or the last four of the Social Security number inside of a privacy flap in the ballot return envelope. The bill would also prohibit local elections officials from sending out unsolicited mail-in ballot applications, ban last-minute changes to election procedures, and clarify that properly appointed poll watchers must be able to see and hear election workers’ activities.

Asking for ID for mail-in ballots — one of the measures most vociferously opposed by Democrats — is supported by 81 percent of Texas voters, with voters from all demographic groups and both major parties approving of the safeguards.

Such widespread support for additional protections for mail-in ballots is likely informed by an understanding of their inherent vulnerability to fraud, with  Abbott reminding Texans that “Voter fraud takes place ‘in abundance’ with absentee balloting in Texas,” in a Tuesday tweet quoting an Obama-appointed federal judge in a 2014 case. Abbott vowed to call as many special sessions as needed to pass the election integrity legislation.

On Tuesday evening, Texas Democrats even lost the New York Times, in a piece with a headline partially reading, “…the group is now confined to a Washington hotel, holding virtual meetings and making little headway in its persuasion campaign.”

If Democrats start to break ranks, as is widely rumored to be happening, Abbott may not need to call additional special sessions.