I can imagine that because of his pro Putin stance and his vax status, he would be being treated very harshly.

Being declared a national security risk is a big deal. He’s been accused of all sorts of things to do with Russia and I’m not qualified to comment on that at all because I’d only be guessing.

I think the real issue is how he is being treated unfairly and cruelly because he refuses to be injected.

LIVE AT 10:30AM ET: Just as COVID starts to die out, a brand new public health threat emerges: Monkeypox! But luckily, Bill Gates and the W.H.O. already have it all planned out! Join me for a live interview with Dr. David Martin to discuss the latest global health scare, and what to expect next.

Today’s show is brought to you by RiseTV, where it’s our mission to awaken, uplift, and unite America—one show at a time. Get your free trial of RiseTV: https://bit.ly/3jLYL6x

Save up to 66% at https://MyPillow.com using Promo Code MAN

Ann Vandersteel joins me to discuss the sedition and treason of Biden and his morally bankrupt administration. The good news is, WE the People are fed up, increasingly informed and ready to take our nation back. May God bless the Patriots.

It’s Time to Have Emergency Food on Hand
http://preparewithsgt.com/
SAVE $150 on 3-Months of Food With My Link, PLUS FREE SHIPPING! 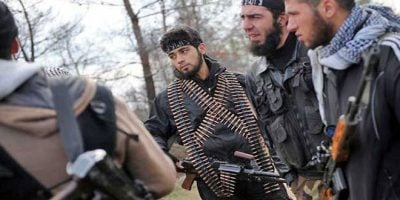 On June 10, the National Anti-Terrorism Prosecutor’s Office (PNAT) in Paris asked for sentences ranging from five years to life imprisonment for 20 defendants in the trial for the November 13, 2015 attacks in Paris which took the lives of 130 people and injured more than 350.  In the course of the trial, it was proven that the defendants were following Radical Islam, or were influenced by the political ideology.

On January 7, 2015, a deadly assault took place at the office of a magazine, Charlie Hebdo.  A pair of terrorists following Radical Islam armed with assault rifles burst into the office and murdered 11 people. Over the next 48 hours, six more people were killed in the attacks in Paris and the surrounding area.

The November 13 attack was claimed by Al Qaeda, but the attacker had pledged his allegiance to ISIS.  France had been targeting ISIS positions in Iraq since September 2014. Following the horrific attacks in Paris, French President Francois Hollande pledged more than $850 million to fund counterterrorism schemes.

On August 19, 2014, President Hollande confirmed in an interview with the French media Le Monde that France had been directly supplying arms to the Free Syrian Army (FSA) in their role in the US-NATO attack on Syria for regime change. France had provided weapons including 12.7-mm machine guns, rocket launchers, body armor, and communications equipment.  French intelligence officers were present in Syria, in areas then controlled by the FSA and their Al Qaeda and ISIS partners.

According to the Qatari official, Hamad bin Jassim, the US-NATO attack on Syria, using Radical Islamic terrorists as foot soldiers, was coordinated by the US CIA office in Southern Turkey, and all the money and weapons sent to the terrorists were coordinated through the Americans.  In 2017, President Donald Trump shut down the CIA operation in Turkey. Since then, the conflict in Syria has turned into a stalemate, with only Idlib under the control of Al Qaeda-affiliated terrorists, with weapons, funding, and protections provided to them by President Erdogan of Turkey, and food and humanitarian supplies provided to the terrorists, their families, supporters, and civilians held as human shields, by the United Nations World Food Programme.

According to Le Monde, France’s leftist party, New Anti-Capitalist Party (NPA), has supported the US-NATO attack on Syria for regime change, and the Socialist Party in France, (PS), has stood on a foreign policy platform that supports the FSA and their Al Qaeda and ISIS allies as “freedom fighters” in a democratic revolution. The NPA issued a resolution in September 2013 in support of the continued supply of weapons to the terrorists in Syria, who were murdering, raping, maiming, and kidnapping unarmed civilians daily.

In September 2013, NPA spokesman Olivier Besancenot called on Foreign Minister Laurent Fabius to give weapons to the armed terrorists in Syria. He advised the government not to heed the advice of others who cautioned that the weapons might end up in the hands of terrorists who could harm France or French interests.

It has been said you shouldn’t feed a monster, because it could turn to kill you. France has fed the Radical Islamic terrorists in Syria, and the terrorists who killed and maimed French people in Paris were following the same political ideology as those terrorists in Syria, who were using French weapons, and being trained and advised by the French military.

However, in a Paris courtroom, the families of the victims and the survivors of the November 13, 2015 attack will experience some justice for the suffering caused by those following Radical Islam, which President Emmanuel Macron has declared war on. When will the millions in Syria who have suffered, be made homeless, and lost loved ones have their day of justice?  When will the Syrian people have their day in court against the US, UK, and France for their role in funding and providing the weapons to the terrorists who have destroyed Syria?

On June 15, the US-led coalition forces arrested three ISIS members in a daring airdrop mission.  The senior ISIS leader is an explosive expert, as well as a drone specialist.  Two of his fellow terrorists were arrested with him northeast of Aleppo in the Jarablus countryside.

Syrian conflict and the US-NATO support of terrorists in Syria

According to US General Wesley Clark, the Pentagon had shown him a list of seven countries the US had earmarked for regime change, and Syria was on the list. In the spring of 2011, the plan was put into motion in Deraa, a small and insignificant agricultural town on the Jordanian border with Syria. That spot was chosen as the epicenter of the Syrian conflict due to the proximity to the US military base in Jordan, which served as one of the staging areas of the US-NATO attack on the Syrian people.

The war on Syria may have been devised in Washington, DC. but French President Nicolas Sarkozy spearheaded the attack on Syria, in close coordination with US President Barak Obama, and UK Prime Minister David Cameron.

Steven Sahiounie is a two-time award-winning journalist. He is a regular contributor to Global Research.

Mark Taliano combines years of research with on-the-ground observations to present an informed and well-documented analysis that refutes  the mainstream media narratives on Syria.