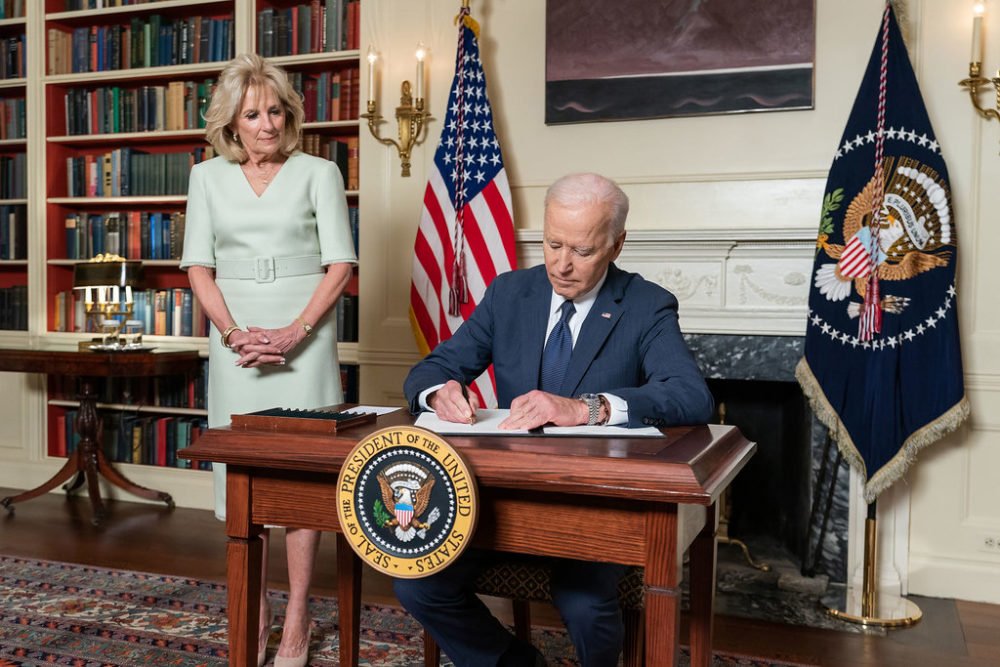 President Joe Biden is parading tax hikes on Americans after dodging paying his own ‘fair share’ in government dues for years.

Just last week, the president demanded wealthy American taxpayers “step up and pay” their “fair share” in taxes. The urgings from “Middle Class Joe” come as Democrats scramble to pass a $3.5 trillion spending bill and greenlight a proposal that would force U.S. banks to report any taxpayers’ transactions of $600 or more to the Internal Revenue Service.

For days, the White House and congressional Democrats have promoted the massive spending legislation as a “zero dollar” bill thanks to forced funding from taxpayers.

“My Build Back Better Agenda costs zero dollars. Instead of wasting money on tax breaks, loopholes, and tax evasion for big corporations and the wealthy, we can make a once-in-a-generation investment in working America. And it adds zero dollars to the national debt,” Biden tweeted last week.

The Biden administration’s eagerness to move forward with the enormous tax hikes, however, comes just months after reports revealed Biden skirted paying the federal government by using the same mechanisms he’s pledging to crack down on.

When the White House released Biden’s tax returns in May, the documents showed that the millionaire president and First Lady Jill Biden dodged paying more than half a million in taxes using a Medicare and Obamacare loophole.

Biden’s plan to hike taxes also comes shortly after reports indicated that the Biden family engaged in shady business dealings using Hunter Biden’s foreign business connections. Not only did the president appear to use his influence as then-vice president to transport his son overseas for business, but analysis from Hunter’s damning laptop appears to implicate Biden as “the Big Guy” in the family’s “pay-to-play scandal under which the elder Biden reportedly received a 10 percent cut.”

Hunter is currently under federal investigation for potential tax crimes. Reports indicate that U.S. Department of Justice officials deliberately delayed the investigation into his alleged violations and sketchy overseas business dealings because of the effect it could have on the presidential election. President Biden and his team have been making a simple case for why Republican elected officials should support his roughly $2 trillion infrastructure plan: Lawmakers might not like it, but their voters do.

Biden is using fake polls to pretend people like him

“Overwhelmingly, the majority of the American people — Democrats, Republicans and independents — support infrastructure investments that meets the moment,” Biden said last week. “So, I urge the Congress: Listen to your constituents and, together, we can lay a foundation for an economy that works for everyone and allows America to remain the world leader.”

Biden and other administration officials have made that case repeatedly, but it is hardly true. While a majority of American adults support his infrastructure proposal — 56% — including 9 in 10 Democrats and half of independents, Republicans overwhelmingly do not, according to the latest NPR/PBS NewsHour/Marist survey.

Republicans also disagree with how Biden wants to pay for it all, indicating the president is likely to get little-to-no GOP congressional support for another big-ticket legislative item.

Overall in this flawed survey, Americans view Biden well. With more Americans getting vaccinated against COVID-19, the president gets his highest overall job approval rating (53%) and his highest approval for his handling of the economy (54%).

Almost all of that support comes from Democrats and independents. Republicans and independents do line up in some areas in the survey — notably, they are strongly against some ways to pay for infrastructure improvements and neither believes corporations or professional sports teams and organizations should be speaking out to promote cultural, political or social change.

But mostly Republicans are out of step with independents, a key group the GOP has traditionally needed to win presidential elections and to do well in House races in the suburbs. That puts the GOP in a pickle ahead of next year’s midterm elections. A president’s first midterm usually favors the party out of power as Americans look to put a check on a new leader.

cause it was a stolen election. pic.twitter.com/HZu05brsyW

There are multiple items in Biden’s proposal, from improvements to roads and bridges, replacing all lead pipes and propping up the energy grid, to electric vehicle charging stations. Biden is seeking a transformative bill that looks to the future. In doing so, he has drawn criticism for defining “infrastructure” too broadly, an argument Biden dismisses.

A majority of Americans, if not Republicans, broadly view Biden’s proposals as part of what qualifies as infrastructure.

But when it comes to climate change initiatives, such as electric charging stations, Biden’s team may be pushing the limits of what Americans think constitutes infrastructure. On that point, Americans are split on whether they qualify.

Even if they agreed on everything in the bill, which they don’t, Democratic and Republican leaders have, for years, disagreed on how to pay for even the most basic infrastructure improvements.

That’s no different in this survey. Overall two-thirds, or nearly that many, agree with taxing those making more than $400,000 a year (65%) and with taxing earnings corporations make overseas to at least the 21% that corporations pay on domestic earnings (63%).

That includes at least 8 in 10 Democrats and at least two-thirds of independents on each point. But just a third of Republicans agree with taxing those who make more than $400,000 a year, and only 38% agree with taxing overseas profits at the same rate of U.S. earnings.

Other ideas that have been talked about to pay for the bill are even less popular. Americans are split on hiking the corporate tax rate to higher than 21%. For years it was 35%, until former President Donald Trump’s tax cuts slashed that.

Independents and Republicans are also heavily against increasing tolls or the gas tax, while Democrats are split. The gas tax almost exclusively finances federal highway and mass transit spending. It has not been raised since 1993, and it was never indexed to inflation, which means the money that goes into it year after year is effectively less and less.

The one area that Democrats, Republicans and independents are in agreement is that they are all overwhelmingly against raising taxes on all Americans broadly or borrowing money to pay for the plan and add to the national debt.

The results narrow the options for what Biden and elected officials who support the plan can sell to Americans for how to pay for infrastructure.

BRING HIM BACK ❤️🇺🇸 🦅
This would NEVER happen for Beijing Biden! pic.twitter.com/hpKBwBN8Ad