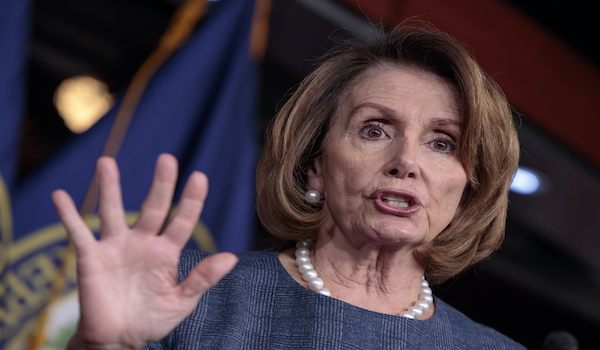 House Speaker Nancy Pelosi (D-CA) claimed the January 6 Capitol rioters would have “had a battle on their hands” if they messed with her, adding that she is “a street fighter.”

“That’s what they were setting out to do,” Pelosi told USA Today, adding the rioters had intended to access herself and other targets such as former Vice President Mike Pence.

She added that if they had reached her, she would not have been someone to mess around with.

“Well, I’m pretty tough. I’m a street fighter. They would have had a battle on their hands,” she continued.

Members of Congress had to evacuate the scene in gas masks after a violent mob took over the U.S. Capitol building.

Pence, in his duty as vice president and president of the Senate, was overseeing proceedings to certify Joe Biden’s electoral victory.

Tucker Carlson & Glenn Greenwald Discussing The News That Officer Sicknick Died Of Natural Causes@ggreenwald Blasts Media For Lying About Officer Sicknick’s Death: “They completely exploited this person, this young police officer, who they obviously didn’t care anything about.” pic.twitter.com/XG87AL7ssj

Democrats continue to lie about the Capitol riots

Washington D.C.’s top medical examiner ruled Monday that Sicknick suffered two strokes and died of natural causes the day after he confronted rioters at the U.S. Capitol building Jan. 6. The ruling appears to contradict early media reports that Sicknick had died after he was struck in the head with a fire extinguisher by Trump supporters during the melee.

“The problem was, it fit a narrative that they wanted to tell,” Hurt told host Sandra Smith.

“That narrative included the fact that his death was a key — probably the most significant part — of the impeachment trial against [former] President Trump. The entire impeachment hung on that. Because of that narrative, the media, they ran with it, politicians ran with it.”

While Sicknick’s death was tragic regardless of its cause, Hurt emphasized, the media’s rush to push a political narrative reveals an “extraordinary disdain that these people have for the extraordinary service that Officer Sicknick provided that day and throughout his career.”