New York City Mayor Bill de Blasio (D) on Monday defended his updated vaccine mandates — expanding to private-sector employees as well as young children —  claiming that “vaccine mandates work” and that such vaccine passport programs should be emulated across the country.

De Blasio listed a series of new mandates on Monday, one of which is a “first in the nation” expansion to private-sector employees, covering about 184,000 businesses. Additionally, he is now requiring businesses to discriminate against unvaccinated children ages 5-11, including them in the Key to NYC vaccine passport program beginning December 14.

“This is something that is going to keep kids safe and families safe. Go get your child vaccinated. As long as they’ve gotten that first dose by December 14, they can continue to participate [in] indoor dining, entertainment, all these great things,” he said Monday.

The far-left mayor attributed the “aggressive” actions to the Omicron variant, as well as the winter months and upcoming holiday gatherings.

“We cannot let those restrictions come back,” he said, suggesting that the solution is doing things that “work.”

“Use the thing that works. Vaccination,” he continued, calling it the “central weapon in this war against COVID.”

“It’s the one thing that has worked every single time across the board on a strategic level. It’s the reason New York City is back in so many ways, and it’s the reason we can avoid shutdowns and restrictions,” de Blasio claimed, calling the Key to NYC Pass “extremely effective” and calling for similar programs across the country.

“[It] needs to be more,” he said of the program, adding it “should be used in more and more places.”

“Now as to the fact that this should be picked up all over the country, and emulated, what clear, clear support we got from President Joe Biden,” de Blasio said at the time.

Notably, it was over one year ago that Biden promised he “wouldn’t demand” mandatory vaccinations. 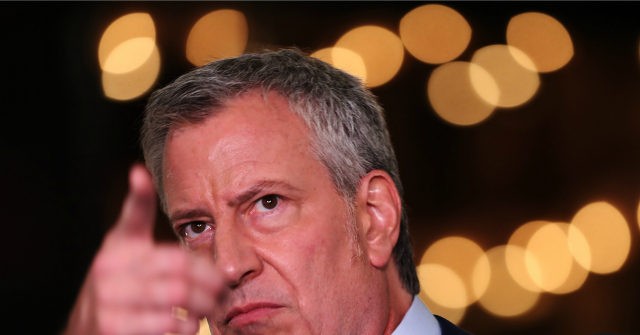 New York City will mandate the coronavirus vaccine for all private sector employees starting December 27 in an attempt to combat the omicron variant.

Mayor Bill de Blasio announced the “first in the nation” measure on Monday morning, calling it a preemptive strike against the omicron coronavirus variant and a measure to “maximize vaccination quickly, so we can get ahead of omicron and all the other challenges we are facing right now with COVID.”

“All private-sector employers in New York City will be covered by this vaccine mandate as of Dec. 27,” he added.

It takes effect 12/27, the mayor said on MSNBC. pic.twitter.com/NiOLIcmjFB

Bill de Blasio’s mandate also expands indoor dining, entertainment, and fitness vaccine mandate for children, ages five to 11 years old. Individuals who are between those ages and unvaccinated will reportedly be refused service at restaurants, entertainment venues, and gyms on December 27.

The new measures will also require two vaccine doses, up from one, to be considered fully vaccinated.

It’s all about control https://t.co/ipSKlDZ5NA

Bill de Blasio’s omicron variant measures come as the virus has spread to 17 states, the Washington Post reported on Monday. It has rapidly spread, though candidate Joe Biden promised at least ten times in 2020 to “shut the virus down.”

The News York Times admitted in November more people have died under Biden’s watch from the coronavirus than under former President Donald Trump, despite vaccine availability.