In this clip you can see the Russian service men surrendering and been made prisoner and then the same men in the same location laying dead on the spot.
The names of perpetrators of the brutal execution of Russian POWs became known as the killers did not even hide their faces, their names became known very quickly.
The perpetrators, allegedly responsible for the murder, are border guards Artur Bortnichuk and Nazar Mikhailovsky, graduates of the Ministry of Internal Affairs University in Kharkov. The wounded “Andrukha” most likely is Andrey Sokol.
It is worth noting these are not Nazis from the Azov battalion or the Right Sector, but ordinary AFU soldiers, who absolutely inhumanly and criminally gathered the prisoners and shot them point blank right on the spot.

Follow us on telegram for the latest updates: https://t.me/STFNREPORT

Two weeks ago, the United States government, State Dept., CIA and their allies in Big Tech, made a public announcement {Go Deep} that stated violence against Russians would be officially sanctioned by Facebook, Instagram and Google.  In essence, Big Tech said it was now okay for Russians to be targeted on social media.  Today, video footage is leaked showing graphic torture of Russian POW’s by Ukraine military units. 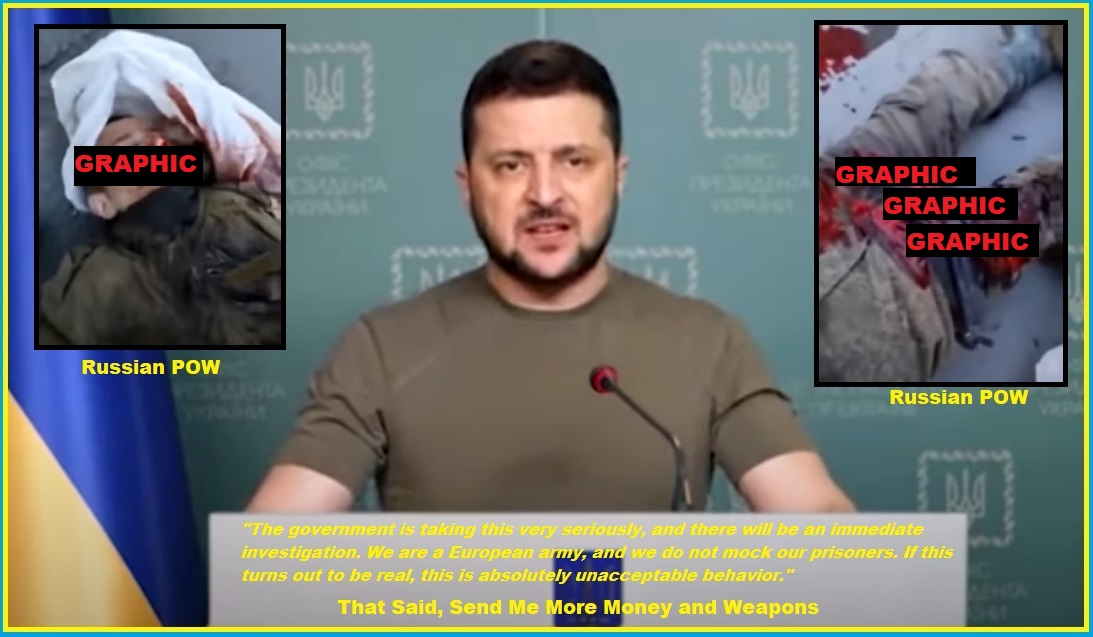 BACKGROUND – The purpose of the shift in Big Tech ‘terms and conditions‘ for the promotion of violence, was seemingly to enhance the western propaganda campaign.  Elevating Ukraine’s victim status in the minds of the ordinary citizens, while supporting the negative promotional campaign against Russia and Vladimir Putin was part of the design.  The transparent motive of the shift was obvious to those who follow the activity of U.S. intelligence and State Dept.

Deep weeds political followers will remember the first collaboration between Facebook and DoS/CIA using this approach took place in Egypt and Libya at the beginning of the 2010 U.S. Obama-inspired Islamist Spring.  A more refined 2022 version was just recently deployed against Russia.  The tech control agents needed to parse the nuance carefully to allow targeted and approved violence to be narrowly focused. 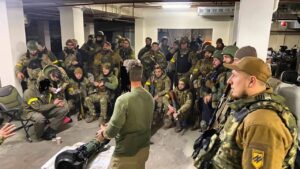 However, as the narrative from the media propaganda machine continues to frame the Ukraine military as ‘freedom fighters’, they are now faced with videos surfacing showing Ukraine military regulars torturing Russian prisoners of war (POW’s).

This is problematic for both NATO and Ukraine, as they must protect the image of the Ukraine military in order to maintain public support and funding.

The videos of the torture are graphic and very disturbing to watch {Severely Restricted Video 1 Example Here}, and I would not recommend watching them if you are not comfortable seeing men get shot, brutalized and beaten.  {Severely Restricted Video 2 Example Here} They are graphic, bloody and violent.  However, the torture itself, while censored for political need, aligns with the official NATO and Big Tech position that advocacy for violence against Russians is sanctioned.

The first video shows Russian soldiers with canvas bags placed on their heads and then beaten in the face with rifle butts.  The prisoners are shot in the kneecaps and genitals, and they are left on the ground to bleed to death.  Several vans then arrive at the Ukraine military compound in Kharkiv (roughly 20 miles from the Russian border), and as each POW is removed from the van they are shot in the knees.

A second video shows Russian POW’s lying face down in a paved courtyard, or compound, and then being shot in the knees from the rear.

Apparently, one of the videos contains Russian soldiers who were part of a reconnaissance mission in the region and were captured.  The Ukraine military gleefully torture the captives and record their endeavors for posterity.  It was the Ukraine military units bragging about the torture that exposed their brutal behavior.  All of the scenes are gruesome in the extreme.

The State Department has a problem with these video’s surfacing.  Who does the State Dept turn to?….. CNN

(VIA CNN) – Video has surfaced showing what appear to be Ukrainian soldiers shooting men who are apparently Russian prisoners in the knees during an operation in the Kharkiv region.

On the almost six-minute-long video, the Ukrainian soldiers are heard saying they have captured a Russian reconnaissance group operating from Olkhovka, a settlement in Kharkiv roughly 20 miles from the Russian border. 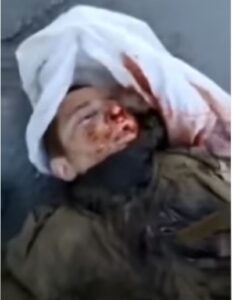 Asked about the video, a senior presidential advisor, Oleksiy Arestovych, said in an interview posted on YouTube Sunday: “The government is taking this very seriously, and there will be an immediate investigation. We are a European army, and we do not mock our prisoners. If this turns out to be real, this is absolutely unacceptable behavior.”

In a separate briefing, Arestovych said, “We treat prisoners in accordance with the Geneva Convention, whatever your personal emotional motives.”

CNN has reached out to the Ukrainian Defense Ministry for comment. In response, the ministry sent CNN a statement from the Armed Forces chief, Valerii Zaluzhnyi. The statement did not refer directly to the incident, but said, “In order to discredit Ukraine’s defense forces, the enemy films and distributes staged videos showing inhuman treatment by alleged ‘Ukrainian soldiers’ of ‘Russian prisoners.’

“I emphasize that servicemen of the Armed Forces of Ukraine and other legitimate military formations strictly adhere to the norms of international humanitarian law,” Zaluzhnyi said. “I urge you to take into account the realities of informational and psychological warfare and trust only official sources.”

It’s unclear which Ukrainian unit may have been involved. The soldiers speak in a mixture of Ukrainian and Russian with Ukrainian accents.

The video comes as Ukrainian forces make gains east and south of Kharkiv. CNN geolocated and verified a long video uploaded on a Telegram Saturday showing a successful assault by Ukrainian troops of the Azov Battalion, in which they took a number of Russian prisoners in a rapid assault on Olkhovka, also known as Vilkhivka.

Some of the prisoners were stripped and blindfolded.

That video was posted by Konstantin Nemichev, a Kharkiv regional official who took part in the attack on Olkhovka. He told CNN he was not associated with the footage that emerged showing Ukrainian troops kneecapping Russian prisoners. (read more) 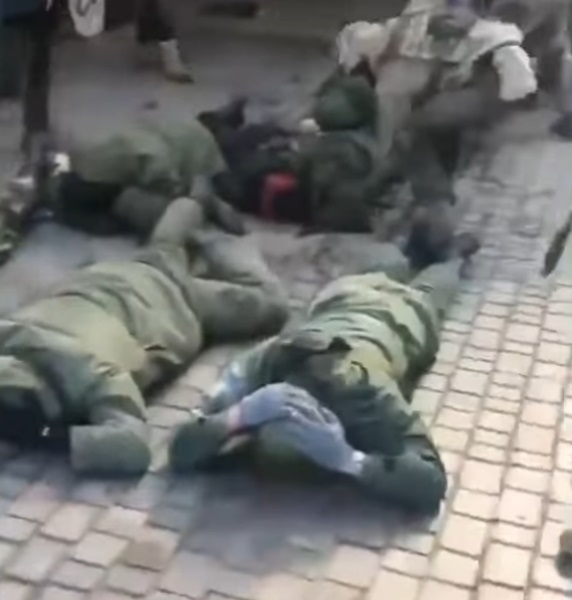 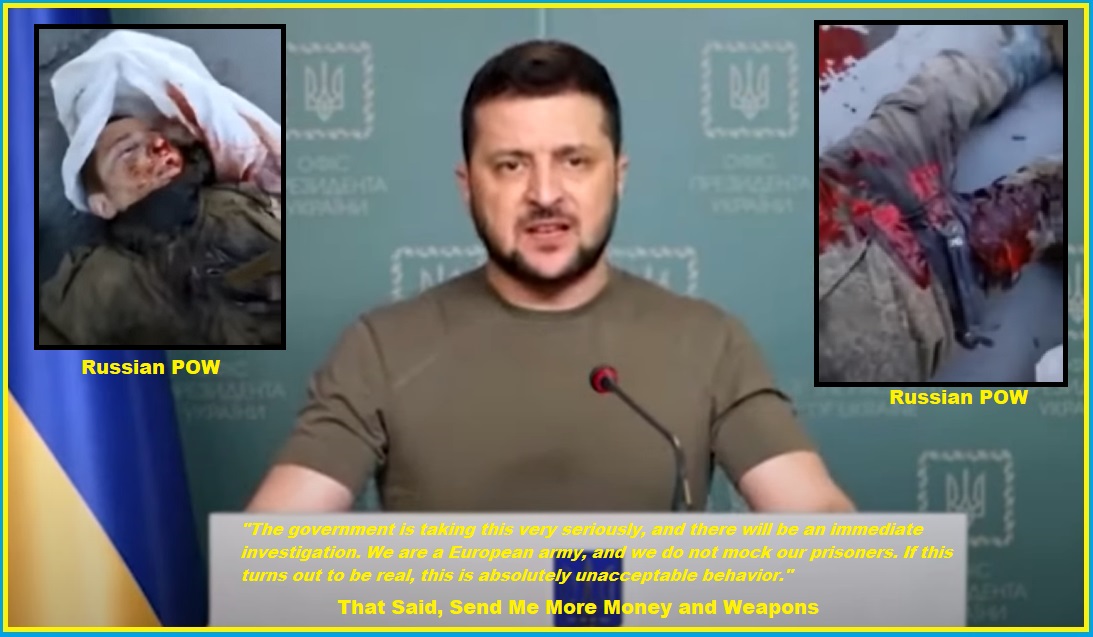 Keep in mind, U.S. taxpayers are giving these Ukraine military terrorists more than $15 billion in direct financing to conduct their torture activities.