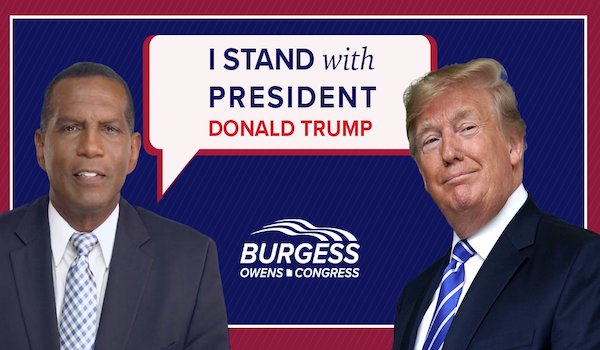 Drawn by far-leftist Pat Bagley, a white man, the cartoon brought to mind the time two years ago when Antifa extremists smeared Daryl Davis, a renowned black activist known for inspiring Ku Klux Klan members to give up their robes, as a white supremacist.

It’s not clear what drives white liberals to attack black conservatives this way.

When Burgess learned of the smear against him, he posted the cartoon to his Twitter feed and derided it as another “pathetic” example of “#wokeracism.”

The cartoon depicts Owens pointing at the southern U.S. border and warning Americans that “they are coming to your neighborhoods.” Depicted next to him is a KKK member saying the exact same words.

The cartoon was written in response to the congressman warning of the consequences of the rampant illegal immigration occurring across the southern U.S. border.

“Believe me, the borders are open right now. We are seeing every single day, people coming here and within hours getting on a train or a plane and going to your neighborhood. So, no Americans, this isn’t a border issue anymore,” Owens said during a visit last week to the southern border.

“They are coming to your neighborhoods, not knowing the language, not knowing the culture, and there is a cartel influence along the way. So be aware, don’t think this is a distance from you now, this is coming your way and it is done on purpose by a party who could care less about we the people,” he added.

This infuriated Bagley, who on Facebook accused the black congressman of spouting “straight up fear-mongering that only a white supremacist could love.”

Owens expressed gratitude for his colleagues’ support and also pushed back on Bagley’s rhetoric.

“I grew up in the 1960’s segregated deep south and witnessed the ugliness of racially fueled rhetoric first-hand. Calling out the human rights abuses at the border is not comparable to the terrorist hate group responsible for killing, assaulting, and harassing my community. The Tribune’s unacceptable mischaracterization does not represent Utah’s values,” he said.

I can’t speak to the Black experience (obviously). But I can speak to the effect the words @RepBurgessOwens used have on White people. From time immemorial they have been used to stir up irrational fear and animosity https://t.co/00WQUqxFW3