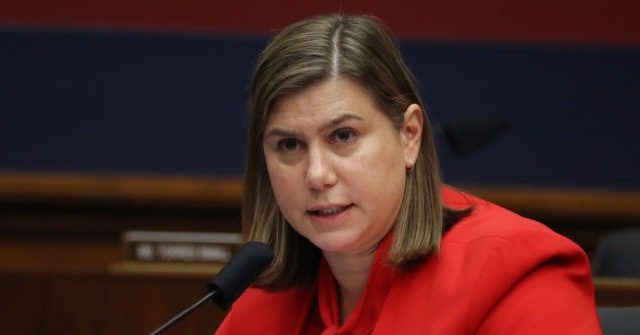 Republican candidate for Michigan’s new Seventh Congressional District, state Sen. Tom Barrett (R-Charlotte), who will more than likely face off against Democrat Rep. Elissa Slotkin (D-MI) in the midterm elections next year, told Breitbart News Saturday that being elected to Congress would allow him to stand up against President Joe Biden’s partisan agenda.

Barrett told host Matthew Boyle, Breitbart News’s Washington political editor, during his appearance on SiriusXM’s Breitbart News Saturday that he announced he is running for Congress to put everything “on the line” and to hopefully be elected to Congress where he will stand up to Biden in Washington, DC, as he retires from the military after 21 years of service.

Check out our announcement video and visit https://t.co/2mFNroWMfn to make a donation! pic.twitter.com/3jRfeiBhR6

The Michigander said he finally had enough after Biden’s “complete failure in leadership” during the botched withdrawal from Afghanistan — which resulted in the loss of life of 13 servicemembers — and the administration’s vaccine mandate on the military, which he “absolutely morally cannot accept.”

Barrett said he continuously stood up for individual rights and individual liberties across the globe since joining the military his senior year of high school. The Republican said after being in the military, he’s not going to stand for individual rights and liberties being threatened in America. “I can’t fight Joe Biden as a helicopter pilot in the army here in Michigan. But I can fight him by going to Congress and standing up against his agenda there,” he explained.

“I’ve put my whole adult life into the army, this isn’t something I did three weeks ago on a whim, so that I could run for Congress, this has been my identity, and spend my life, it is really something that I feel very passionately about,” Barrett said, about his choice to leave the military. “It didn’t come easy to say; I’m not going to do this anymore. This really was something that was an emotional decision for me. … I can’t sit here and watch what’s happening and not do something about it. And that’s really what inspired me to run” for Congress.

Barrett will most likely face off in the midterms against Slotkin, even though she has yet to announce her candidacy for the district since she currently represents Michigan’s Eighth Congressional District before the new congressional lines are finalized due to redistricting happening across the country.

Slotkin is a self-proclaimed moderate Democrat, even though she has voted 96 percent of the time on major votes with House Speaker Nancy Pelosi (D-CA) on the Biden-Harris-Pelosi partisan agenda, which Barrett is looking to stop.

The congresswoman, besides being hesitant at the time to criticize Biden’s botched withdrawal from Afghanistan, has also voted for the $1.2  trillion infrastructure bill — which was signed into law by Biden — along with the Biden’s “marquee legislation,” the $1.75 trillion Build Back Better Act, the Democrats’ reconciliation infrastructure bill.

Even though Slotkin, one of the most vulnerable Democrats running for reelection next year, voted for the bill — which the Congressional Budget Office found would add billions to the American deficit — she claimed the bill was “not perfect.” Barrett said everyone had felt the effects of the bill, putting a struggle on working-class and middle-class families.

“Elissa Slotkin is not a moderate. She’s been in lockstep with Nancy Pelosi and Joe Biden this entire term, and we’re gonna call her out on that. It’s just not okay. And meanwhile, I’m a conservative. I never pretend to paint myself as a moderate,” he explained. “By dumping trillions more in spending is only going to make the situation worse, especially at a time where the administration is shutting down pipelines throughout America that’s leading to absolutely astronomical increases in energy and gasoline, home heating.”

The Sunshine State is continuing to defy the opinions and attacks offered by members of the far-left and establishment media, reporting the lowest coronavirus cases per capita in the United States.

As of Monday, Florida continued to report the lowest case rate per 100,000 standing at seven, per the New York Times’ latest tally. Florida’s daily average of cases stood at 1,437 as of Monday, a decrease of two percent over the last two weeks.

Blue states, famous for their lockdowns, continue to struggle to catch up to Florida in terms of low cases. Gov. Gretchen Whitmer’s  (D) Michigan, for example, is reporting a daily average of 8,780 daily cases, or 88 per capita. That represents an increase of 78 percent in the last two weeks. Last week, state health leaders issued another health advisory, urging everyone over the age of two to wear a mask, regardless of their vaccination status. 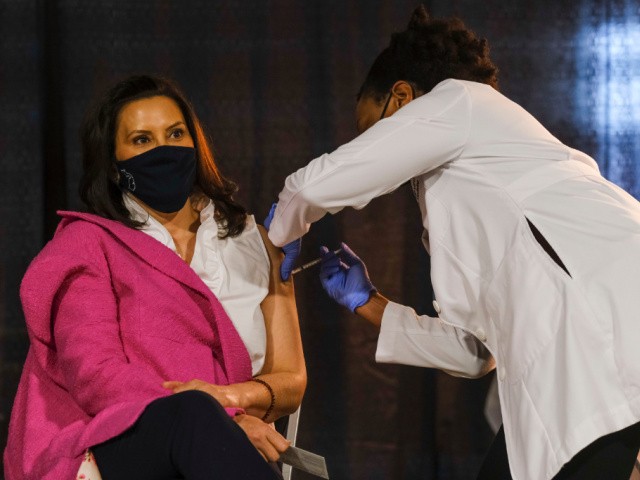 Michigan Gov. Gretchen Whitmer receives a dose of the Pfizer Covid vaccine at Ford Field during an event to promote and encourage Michigan residents to get the vaccine on April 6, 2021, in Detroit, Michigan (Matthew Hatcher/Getty Images).

Gov. Tom Wolf’s (D) Pennsylvania, which he put under lockdown for months on end, is also struggling, reporting a daily average of 5,903 cases, or 46 per 100,000. That represents an increase of 43 percent in the last two weeks. 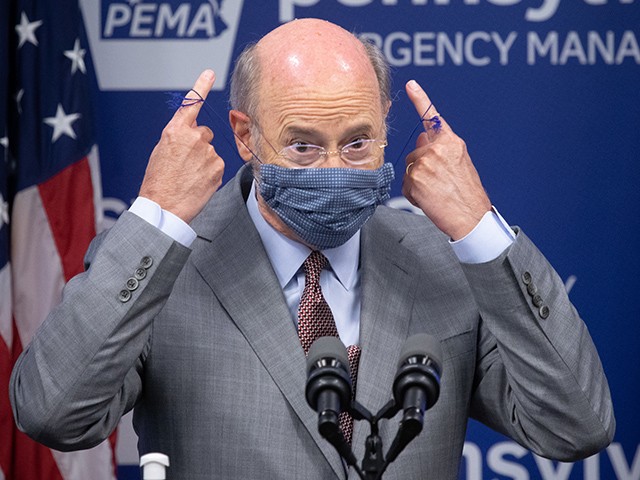 Similarly, Gov. Kathy Hochul’s (D) New York, once the U.S. epicenter of the virus, is reporting a daily average of 6,901 cases, or 35 per capita. That represents an increase of 63 percent in the last 14 days. 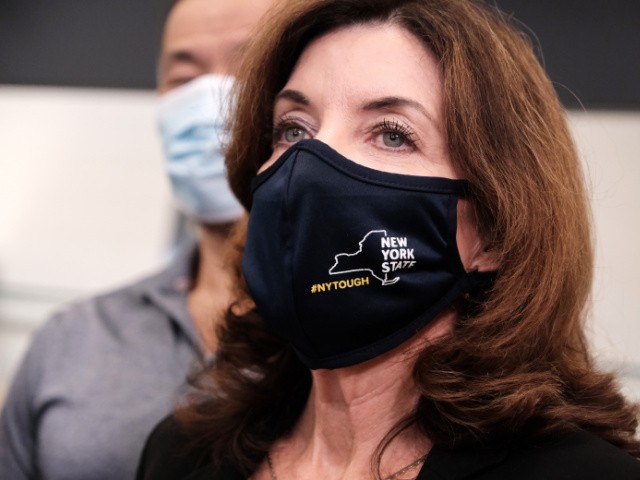 Florida Gov. Ron DeSantis (R) noted this phenomenon during his press conference in Brandon, Florida, on Thursday, where he signed legislation aimed to protect workers from mandatory vaccine requirements. 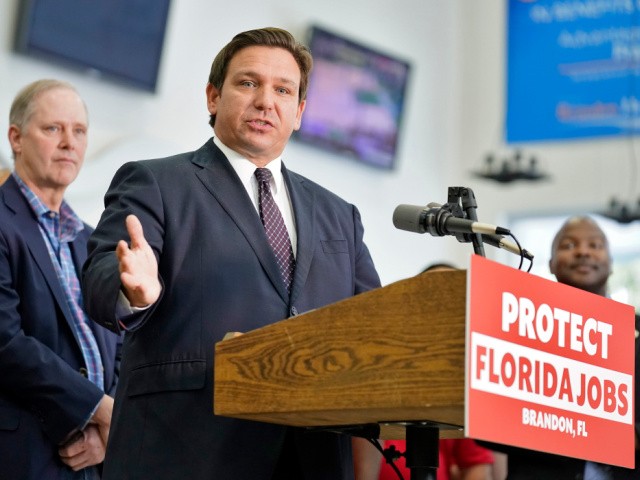 Florida Gov. Ron DeSantis speaks to supporters and members of the media after a bill signing Thursday, Nov. 18, 2021, in Brandon, Fla. DeSantis signed a bill that protects employees and their families from coronavirus vaccine and mask mandates (AP Photo/Chris O’Meara).

“They don’t want to tell you this, but Florida for like almost a month has been either the lowest or one of the lowest COVID in the entire country,” he said.

“And so, I don’t know if they’re even going to cover that, but I see it happening, and it was something that was obviously predictable,” the governor added.