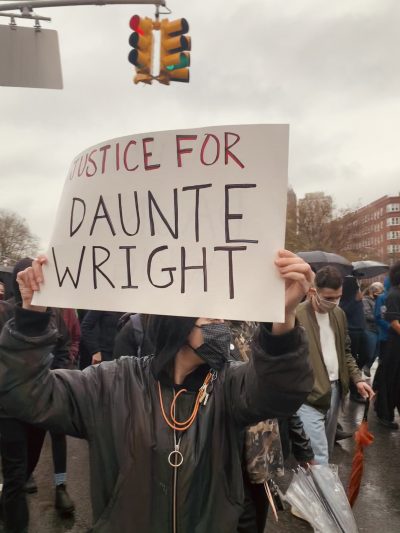 When veteran Minnesota police officer Kimberly Potter, who is white, stopped Daunte Wright, a 20-year-old Black man, for an expired registration tag, she committed an act of racial profiling. As a result, Wright’s blood is on the hands not only of Potter but also of the U.S. Supreme Court, which has legally sanctioned this type of racial profiling.

Like Derek Chauvin, who is on trial for killing George Floyd, Potter is not an exception to the rule. Both are typical representatives of a system of racist, violent law enforcement against Black people. When Potter shot and killed Wright, her act — whether intentional or accidental — was also grounded in the same sort of racism manifested by officers throughout the United States.

Potter killed Wright quickly, unlike Chauvin, who tortured Floyd to death over a period of nine minutes and 29 seconds. After she stopped Wright, Potter found he had a warrant out for his arrest for a misdemeanor. When the officers tried to arrest him, Wright pulled away to get back in the car. Potter pointed her gun at Wright, threatened to taser him and then shot him. The overreaction of both Potter and Chauvin to relatively minor offenses led to the murders of two unarmed Black men. “Why, when you stop people of color, [do] you automatically draw a weapon?” asked Pastor Ezra Fagge’Tt, an eyewitness to Wright’s death.

Although Potter may have had probable cause to believe that Wright committed a minor traffic infraction, her decision to stop him was also the result of racial profiling.

In 1996, Antonin Scalia wrote an opinion for a unanimous Supreme Court that legalized racial profiling during traffic stops. The Court authorized pretext stops in Whren v. United States. That means officers can stop cars and temporarily detain motorists on the pretext of enforcing traffic laws, even if a reasonable officer would not have stopped the driver absent some additional law enforcement objective.

Even if they are subjectively motivated by racism, officers can stop a car as long as they have probable cause to believe the driver committed a traffic infraction. Whren permits “reasonable”law enforcement objectives to serve as a pretextual justification for subjective suspicion on the basis of race. Pretext stops foster racial profiling, and ultimately, the use of violence against Black people.

Living in a society steeped in white supremacy, non-Black people in the U.S. often associate Blackness with criminality and violence. The participants in a 2017 study conducted by the American Psychological Association “believed that the black men were more capable of causing harm in a hypothetical altercation and, troublingly, that police would be more justified in using force to subdue them, even if the men were unarmed,” lead author John Paul Wilson said. Non-Black participants were more likely to view the Black men as more harmful.

More than a quarter of police killings in 2018 occurred during traffic stops, according to a study conducted by National Public Radio. Officers’ use of force is not proportionate to the level of risk they’re faced with during these traffic stops.

Legal scholar Jordan Blair Woods found that “the rate for a felonious killing of an officer during a routine traffic stop was only 1 in every 6.5 million stops.” Likewise, the rate for an assault resulting in serious injury to an officer was just 1 in every 361,111 stops. Yet Black men were killed at a rate of 31.17 per every 1 million stops, a report by ProPublica concluded.

Potter is claiming that she intended to reach for her Taser but accidentally grabbed her gun instead. Before shooting Wright, Potter screamed, “Taser!” Even if Potter did intend to taser Wright, that still would have amounted to the use of excessive force.

Tasers are electrical weapons that “deliver pulses of electrical charge that cause the subject’s muscles to contract in an uncoordinated way, thereby preventing purposeful movement. This effect has been termed ‘neuromuscular incapacitation,’” according to the 2020 UN Guidance on Less-Lethal Weapons in Law Enforcement. “The charge is delivered through metal probes that are fired towards the subject but which remain electrically connected to the device by fine wires.”

Officers regularly use Tasers despite their lethal nature. While police ostensibly seek compliance from victims by utilizing Tasers, they render victims unable to respond to commands due to neuromuscular incapacitation. There is a pattern of disproportionate use of deadly force by tasering Black people. A Reuters survey on Taser-related deaths through 2018 concluded that of the 1,081 people who have died in the U.S. from the use of Tasers, at least 32 percent were Black, even though Black people comprise only 14 percent of the population. But although 29 percent of people killed by Tasers were white, 60 percent of the U.S. population is white.

Officers are rarely held accountable for killing Black people. Mapping Police Violence reported in 2020, “Officers were charged with a crime in only one percent of all killings by police.” Most officers who are charged are not convicted. And in the few cases they are convicted, it is frequently for lesser charges, not murder.

The timing of her killing of Wright made Potter’s prosecution more likely. Tensions in Minneapolis and indeed, throughout the nation, are high as video clips of Chauvin crushing the life out of Floyd are broadcast repeatedly throughout Chauvin’s trial. The justifiable public outrage at Potter’s shooting of Wright led to quick resignations of Potter and the Brooklyn Center police chief. Prosecutors charged Potter with second-degree manslaughter, which carries a maximum of 10 years in prison.

In Minnesota, second-degree manslaughter is defined as causing the death of another by “culpable negligence whereby the person creates an unreasonable risk, and consciously takes chances of causing death or great bodily harm to another.”

But Ben Crump, attorney for the Wright family, stated “This was no accident. This was an intentional, deliberate and unlawful use of force.” He said, “You would think that you know what side your gun is on and what side your Taser is on. There was no need to even Tase him.”

Wright’s aunt, Nyesha Wright, wants Potter charged with murder. “Prosecute them, like they would prosecute us,” she said at a news conference. “We want the highest justice.”

Prosecutors are likely doubtful they could get a jury to convict Potter of murder. Second-degree murder, which can result in a 40-year prison sentence, is defined as causing the death of another with an intent to kill. Third-degree murder carries a maximum sentence of 25 years. In order to be convicted, the perpetrator must have caused the death of another by “an act eminently dangerous to others and evincing a depraved mind, without regard for human life.”

Potter is a former president of her police union. These unions often assist members in covering up their misconduct. Police union representatives frequently provide officers with false narratives to conceal their culpability. Officers routinely meet with union representatives and lawyers before they officially submit a statement.

On April 27, the International Commission of Inquiry on Systemic Racist Police Violence Against People of African Descent in the United States, for which I am serving as a rapporteur, will release its report with findings of fact and recommendations addressed to national and international policy makers. The commission is examining whether police violence against Black people in the U.S. constitutes a gross violation of international human rights and fundamental freedoms. Testimony was presented to the commission by family members and attorneys about police killings of 43 Black people and the paralyzing of another, all of whom were unarmed or were not threatening the officers or others.

Racism drove each of the steps that led to Wright’s murder — from Potter’s stop of Wright, to her pulling out her gun, to her threatening to fire a Taser at him, to finally shooting Wright dead. Systemic racism is the fuel that drives police violence against Black people, and we must cast aside any talk of “accidents” when it comes to matters of racially motivated violence.

Marjorie Cohn is professor emerita at Thomas Jefferson School of Law, former president of the National Lawyers Guild, deputy secretary general of the International Association of Democratic Lawyers and a member of the advisory board of Veterans for Peace. Her most recent book is Drones and Targeted Killing: Legal, Moral, and Geopolitical Issues.