The Biden administration has ordered U.S. companies with 100+ employees to ensure their workers are vaccinated or weekly tested for Covid-19 by Jan. 4. In response, Google asked its more than 150,000 employees to upload their vaccination status to its internal systems by Dec. 3, whether they plan to come into the office or not.

At least 600 Google employees signed a manifesto asking their employer to retract the compulsory COVID-19 vaccination mandate ahead of workers returning to offices, according to news from Ripple News on GETTR | @RIPPLENEWS.

“I believe that Sundar’s Vaccine Mandate is deeply flawed,” the manifesto says, calling company leadership “coercive” and “the antithesis of inclusion.”

The manifesto also argues “I do not believe Google should be privy to the health and medical history of Googlers and the vaccination status is no exception.”

Google has maintained its position and stated that all employees who work with government contracts, whether working in the office or not, must be vaccinated.

The authors of the manifesto called Google’s leadership “coercive,” and also sent an open letter to Google’s chief health officer, Karen DeSalvo, MD, saying that if a market leader like Google were to implement vaccine mandates, the “implications are chilling” for companies around the world.

“It normalizes medical intervention compulsion not only for COVID-19 vaccination but for future vaccines and possibly even non-vaccine interventions by extension,” the document says. “It justifies the principle of division and unequal treatment of Googlers based on their personal beliefs and decisions.” 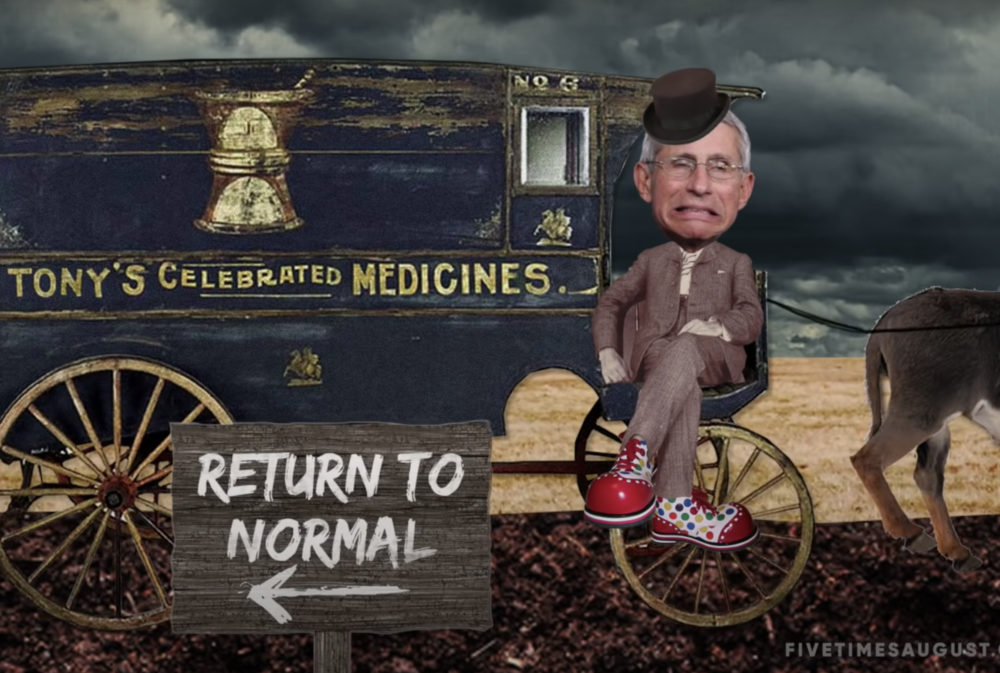 YouTube censored a song criticizing Dr. Anthony Fauci and calling him out for his lies about COVID-19, his desire for public attention, and the cruel experiments his agency authorized.

Sad little man sitting deep in a lie
He’s dead in his soul but he’ll keep you alive
Do what he says, not what he do
‘Cause the truth is for him and the lie is for you

Other verses talk about the tendency for some people to “worship” Fauci and treat him like God despite his track record of flip-flopping and downplaying the science to fit his narrative.

The song, accompanied by cartoon animations of Fauci in clown shoes, a crown, and at one point, even drawn-on devil horns, also alludes to the cruel experiments on beagles that Fauci’s National Institute of Allergy and Infectious Diseases funded and facilitated.

Sad little man gonna trap you like a dog
Put your head in a net while they eat you raw
Don’t ask why, just comply
‘Cause fear is the drug that the doc prescribed

The song doesn’t explicitly mention COVID-19 directly or any specific medical terminology but YouTube demonetized it for “containing medical misinformation.”

“Sorry for any confusion — the video is ineligible for full monetization due to the content (which includes metadata) containing Medical Misinformation. Medical Misinfo is a policy that’s part of Dangerous and Harmful acts. Hope this helps clarify!” @TeamYoutube tweeted last week.

Sorry for any confusion — the video is ineligible for full monetization due to the content (which includes metadata) containing Medical Misinformation. Medical Misinfo is a policy that’s part of Dangerous and Harmful acts. Hope this helps clarify! https://t.co/bzzFEFJXZM.

Songwriter and Five Times August member Brad Skistimas told The Federalist in an email that YouTube has targeted his videos before but “Sad Little Man” was completely removed shortly after radio host Glenn Beck gave it a shoutout on his show and the song’s ratings began to skyrocket.

“Just as the video was reaching peak traffic I started receiving user comments about how difficult the video was to find and that it was not appearing in search results. … It wasn’t until I called YouTube out publicly on Twitter did the original upload magically appear back in search results but Google/YouTube never explained or gave reason to any of this and who knows how many views and potential subscribers I lost due to this,” he explained.

While YouTube eventually reinstated the music video, Skistimas said that the Google-owned company “handicapped” the song so that he can’t make any money off of advertisements.

“I won’t be making much, if any, off of monetization through ads, which is a substantial source for content creators on the platform,” Skistimas said. “The first several days the video was accepted with full monetization, then after a manual review they marked it for limited ads due to ‘medical misinformation’ – which if you watch the video – can see there’s no way to clearly define what that misinformation is.

Skistimas said he reached out to YouTube multiple times demanding specifics but was met with non-answers and accusations that the song promotes “harmful or dangerous acts.”

“My other questions to them have included who made this decision on their team? What are their medical credentials to justify this as medical misinformation? Misinformation pertaining to what medical topic? They’ve been unwilling to answer, of course,” Skistimas said.

It doesn’t @TeamYouTube . I have asked your team via email several times what specific medical misinformation is in my video and nobody will specify. This is clear discrimination and suppression against art and your content creators. Explain yourselves https://t.co/0H43TcEbJk pic.twitter.com/R4lOVmC4V3

YouTube appears to be using its censorship to protect Fauci who, over the weekend, denounced the senators who have called for his prosecution and referred to himself as representing science.

Lawmakers like Sens. Rand Paul and Ted Cruz have called for Dr. Fauci to step down and be prosecuted over the course of COVID-19. Fauci scoffs at such threats, calling it “noise.”

If Fauci was to ever hear my song “Sad Little Man” and criticize it I would respond back with “you’re not really criticizing the song, you’re criticizing all music, because I represent music.” 😂 pic.twitter.com/sLBK55umux

YouTube did not immediately respond to The Federalist’s request for comment. The Big Tech platform has previously censored politicians such as Sen. Rand Paul for disagreeing with government guidance on COVID-19 and has now dipped its toes into censoring art and music.