On June 26, the Russian Air Force fired four high-precision missiles at the Artyom Missile Company’s workshop in the Shevchenko district of Kiev. The company produces weapons for the MRLS.

According to data recorded at the site, all four missiles reached their targets and the facility was obliterated. Due to the high precision of the weapons, civilian infrastructure was not affected.

The fact that the Russian military attacked the Kredmash vehicle plant in the Ukrainian city of Kremenchuk on June 27 was confirmed by Nikolay Danileyko, chairman of the plant’s supervisory board. The plant is located right next to a shopping mall that was later set ablaze.

As evidence of the fact that the Russian military attacked the Kredmash vehicle factory in the Ukrainian city of Kremenchuk on June 27, local media published a video showing the depression where the missile hit and the factory.

Roundly rebuking his neo-liberal globalist political philosophy, the French public has refused to grant President Emmanuel Macron a parliamentary majority as Marine Le Pen’s populists on the right and an ecological alliance on the left surged at the ballot box to strip the once self-described ‘Jupitarean’ leader of his ability to govern France firmly.

Just under two months after securing a second term as President of France, Emmanuel Macron and his Ensemble! coalition have suffered a disastrous result in the final round of voting in the parliamentary elections on Sunday, securing just 245 seats, far short of the 289 necessary to maintain a governing majority and at the low end of polling projections leading up to the vote.

The night’s true victor — at least in terms of exceeding expectations — was perhaps Marine Le Pen’s National Rally (RN), which saw a surprising result of 89 candidates elected to the National Assembly, the most in the history of the party, including its predecessor National Front. Le Pen’s party, which previously only boasted eight representatives, will now have enough representation to form a parliamentary group, providing a major boost to the party in terms of prominence in the national discussion and the ability to fundraise.

Prior to the second and final round of voting on Sunday, posters had estimated that RN would win between 25 and 45 seats, suggesting that anti-Macron sentiment was strong enough to convince left-wing voters to side with Le Pen to prevent the neoliberal president from retaining his grip over the parliament.

Hailing the stunning result for her party, the populist firebrand said: “This victory is that of the French people. Tonight, they have taken their destiny into their own hands by making Emmanuel Macron a minority president. This victory is yours!”

In all, Macron will lead the largest party in the French Parliament but without an overall majority at 245 seats, according to the French interior ministry. The hard-left NUPES (New popular ecological and social union) performed roughly as polled and won 131 seats. Marine Le Pen’s National Rally outperformed expectations to take 89 seats. The Republicans, the once establishment party of former president Nicolas Sarkozy came fourth with just 61 seats: just 15 years ago, they won 313.

Commenting from across the English Channel, Brexit leader Nigel Farage said: “A big night for Marine Le Pen. The dam will break in the end,” referencing the potential for populists to finally gain control of the Élysée Palace and win the French presidency.

The huge upset at the parliamentary level for the National Rally comes after the party secured the largest vote share in the history of the party in a presidential election in April, in which Le Pen received 41.5 per cent of the vote share. While the vote represented a comfortable margin of victory for President Macron, RN saw significant gains among younger millennial voters as well as winning the working-class vote, spelling a potential downfall for the so-called centrist consensus pushed by globalist elites such as former Rothschild banker Macron.

Though Mr Macron had cast himself as a leader akin to the Roman god Jupiter and had promised in 2017 that his presidency would unify France by doing “everything in the five years to come so there is no more reason to vote for the extremes,”  he has apparently failed on this front, with the socialist NUPES coalition headed by far-left Jean-Luc Mélenchon winning 131 seats, making the hard left the largest opposition voting bloc in the parliament, should the group of socialists, communists, and greens maintain a unified front… something which could prove difficult for Mélenchon.

Celebrating his far-left coalition’s success in preventing Macron from securing a majority, Mélenchon said: “The great upsurge of history, of the France of rebellions and revolutions, has a face. That of NUPES. Not for a moment do we give up on the ambition to govern and bring the country to another horizon.”

“These challenges that are coming, we will meet them with a strength that we did not have. We beat Macron. He does not have the majority,” he added. 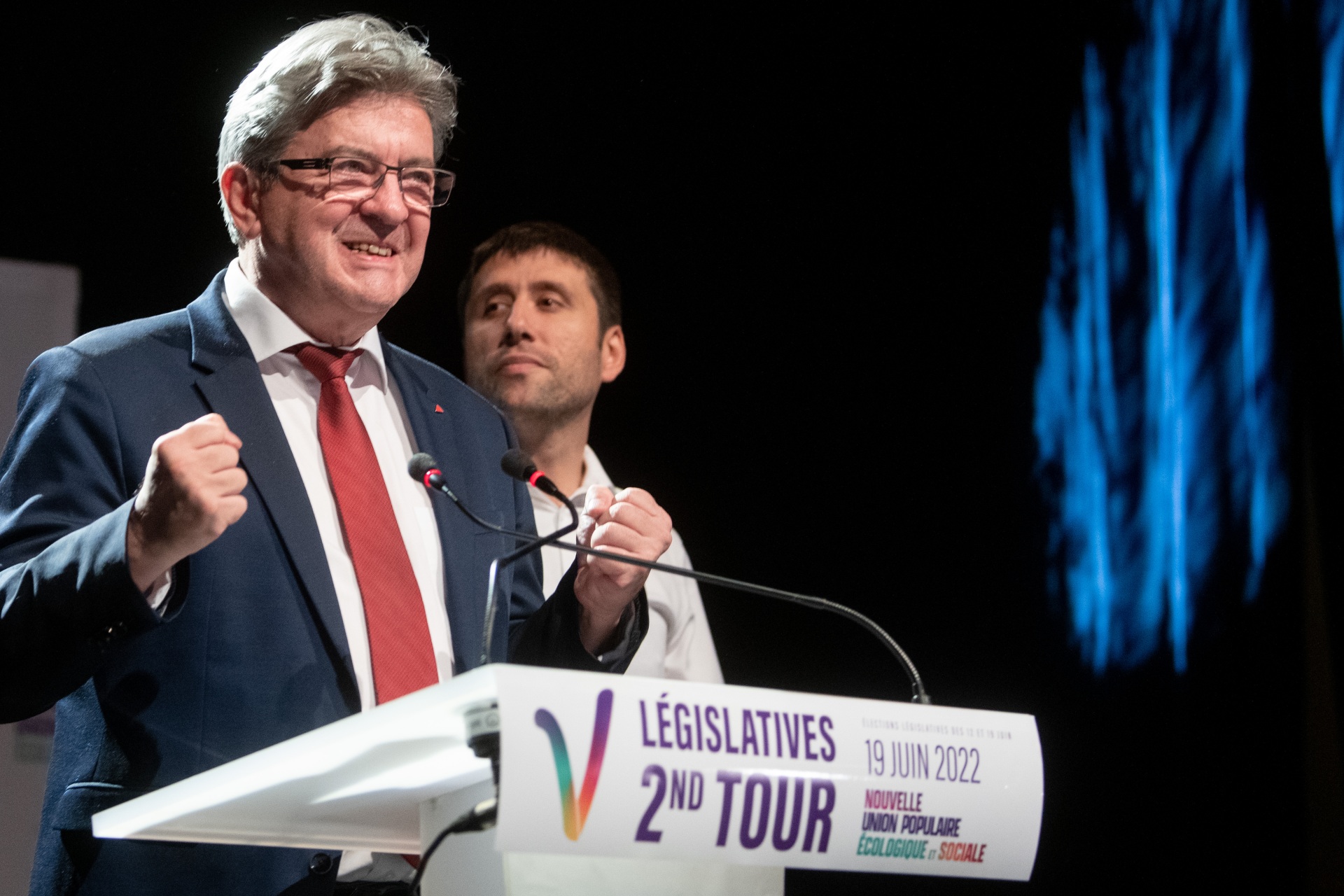 Going forward, it will now be much more difficult for President Macron to enact the agenda on which he stood for re-election, including reforming the country’s pension system, a move that would increase the age of retirement and his stated goal of cutting taxes, as he will likely be needed in Paris to focus on waging wars on the domestic front, forging alliances in the National Assembly if he has any chance of passing his agenda items. The beleaguered president will most likely need to turn to the centre-right Les Republicans, meaning Macron may need to shift to the right to pass legislation.

Amid the cost of living crisis sweeping the continent and the resurgence of populism on the right and the left in France, Macron could also yet again be besieged by an emboldened and angered Gilet Jaunes (Yellow Vest) movement on the streets of Paris.

The loss of his parliamentary majority may also see Macron diminished on the world stage. With hopes now dashed of retaining a governing majority, it remains to be seen how effective Macron will be at casting himself as the premier leader in Europe.

Upon the retirement of Angela Merkel in Germany and the subsequent elevation of Social Democrat (SPD) Olaf Scholz as chancellor — who is the head of a somewhat precarious “traffic light” coalition government including the Greens and the centrist-liberal Free Democratic Party (FDP) — the mantle of head honcho in the European Union appeared to be within grasp for Macron. Yet, Sunday’s results may throw such a vision in doubt.

As Britain’s state broadcaster the BBC put it in their analysis of the result on Monday morning, noting: “The results of Sunday’s legislative election confirm that this second term will be a different beast from the first, with Mr Macron cutting the figure of a chastened and greatly weakened leader.”

The diminishment of Macron on the world stage could have an impact on the future of the Ukraine war, with the French president previously attempting to cast himself as a mediator of sorts, being one of the few European leaders to continually hold talks with Russian President Vladimir Putin in the hopes of crafting a peace agreement.

Interestingly, the role of top dog in the European land war has increasingly fallen to Brexit Britain, with Prime Minister Boris Johnson becoming a chief ally of Ukrainian President Volodymyr Zelensky after taking a much more hawkish line than his counterparts in continental Europe who have proven to be more dependent on Russia for energy imports.

The Fake News won’t show you this, but the Ukrainian Military are starting to surrender in droves. Evidence of unspeakable War Crimes is being collected, including a horrendous torture chamber known as the “Library” where the poor unfortunate souls that found themselves there were broken in inhuman ways.

Plus the identity of the prophetic Gog of Magog is revealed.

If you’d like to keep this channel going, here’s the link https://givesendgo.com/sonofenos

Deaths in the area where I live are up 30% the first 5 months of this year over last years. They are getting very coy with the obituaries, they are leaving off the age of the deceased unless you dig and get the details.

Normally an obit would say “Joe Blow Age whatever” and go on with more details. Now they are not giving the age on anyone under 50 unless you open and read the entire obit. Is this on purpose? Most likely.

Professor Dolores Cahill explaining what is going on with the mRNA Death Shot….Source – Wardo Rants on the ScottiB channel

Uploaded and then very quickly removed from Instagram. This happened on January 11th, 2022 at an airport in Brazil.

The little girl was vaccinated against Covid-19 just days before she passed away according to the girl’s mother. Have you noticed that children dropping dead are starting to become accepted in our brainwashed, brain damaged, brain dead society?