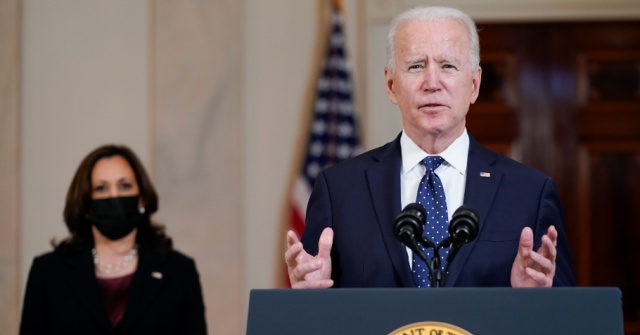 President Joe Biden reacted Tuesday to the verdict in the Derek Chauvin trial, finding him guilty in the murder of George Floyd.

“It was a murder in the full light of day, and it ripped the blinders off for the whole world to see the systemic racism … a stain on our nation’s soul,” Biden said in a speech.

Biden described the verdict as a “step forward” in the fight for justice in America.

But he also said it was a “much too rare” event when law enforcement was successfully prosecuted for the death of a black man in their custody.

“A murder that lasted more than ten minutes in broad daylight for everybody in the whole world to see,” Biden said.

Vice President Kamala Harris introduced Biden, recalling the “long history of systemic racism” in America, where black people were treated “throughout the course of our history as less than human.”

“Most men and women who wear the badge serve their communities honorably,” Biden said. “But those few who fail to meet that standard must be held accountable.”

Biden said the verdict sent the message that no one was above the law, but that was not enough.

“This takes acknowledging and confronting head-on — systemic racism and the racial disparities that exist in policing and the justice system more broadly,” he said.

Biden promised to continue pushing for the passage of the George Floyd Act drafted by Democrats in Congress.

“It shouldn’t take a whole year to get this done,” he said.

Biden described the year of protests since the death of George Floyd as a legacy of what was possible but urged activists to remain peaceful.

“Let that be his legacy, a legacy of peace, and not violence, and justice,” Biden said. “Peaceful expression of that legacy are inevitable and appropriate, but violent protest is not.”

Biden condemned the “agitators and extremists” who “exploit” the “raw emotions of the moment” who have “no interest in social justice.”

“We can’t let them succeed,” he said. “This is the time for the country to come together.”

Biden said it was his “hope and prayer” that Americans could live up to Floyd’s legacy.

“This can be a moment of significant change,” he said.