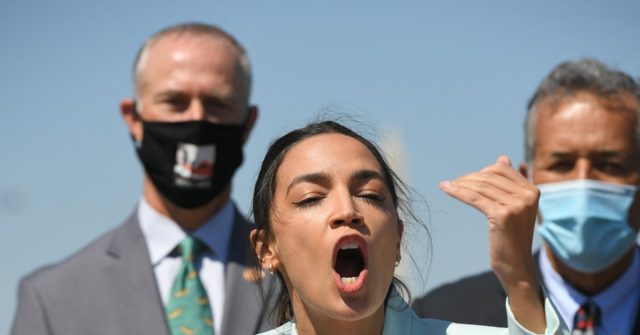 The member of Congress turned Twitter star connected the dots of her conviction. “Because we are allowing people … to deny ourselves human rights and deny people the right to health care, the right to housing and education,” she alleged.

AOC: “The trampling of racial justice is a cause of climate change because we are allowing folks to deny ourselves human rights…”pic.twitter.com/osVDAOIwir

Ocasio-Cortez speech was an effort to relaunched her contentious Green New Deal legislation a day before Earth Day.

The Biden administration’s climate adviser Gina McCarthy “said the United States needs to be humble going into this week’s Earth Day summit after four years away from global climate negotiations while President Donald Trump was in office,” ABC News reported.

“There’s no question that that we have to come back with a lot of eating a lot of humble pie,” she said.

Meanwhile, Breitbart News’ Joel B. Pollak reported on the merit of Ocasio-Cortez’s proposal. “The Green New Deal, in short, is a document worthy of a 19th-century communist manifesto — or a 21st-century undergraduate student council resolution.”

“It presents claims unsupported by scientific evidence; makes demands for every benefit imaginable; and has no idea how to build or pay for any of it,” Pollak wrote.

Pollak additionally says, “The legislation fails to mention — even once — the historic oppression of lesbian, gay, bisexual, transgender, and queer communities. This is a homophobic and transphobic document.”