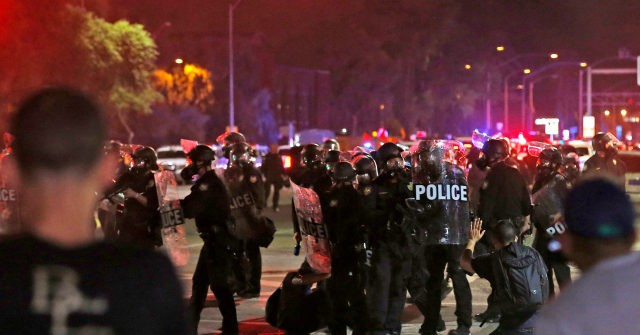 The largest police union in the nation blasted politicians and the media on Tuesday for helping fuel the anti-police rhetoric while it is at a high.

“As Violent Crime SURGES across American,” the National Fraternal Order of Police (FOP) tweeted, “some politicians and some in the media are gaslighting the public into thinking the Police are the Problem…”

The post included some statistics from cities run by Democrats, which show homicides and shootings surged in 2020. The tweet included a graphic showing rising homicide and shooting percentages in six cities during 2020.

As Violent Crime SURGES across America, some politicians and some in the media are gaslighting the public into thinking the Police are the Problem…

According to the post, the largest rise in these crimes was in Portland, Oregon. Portland saw an unparalleled increase in crime last year, with homicides rising over 530 percent in addition to shootings rising over 125 percent.

Breitbart News has extensively reported on gun-related crimes in the crime-ridden, Democrat-led city of Chicago. The graphic from the FOP only shows Chicago in 2020, which had a five percent increase in homicides and an 18 percent increase in shootings. 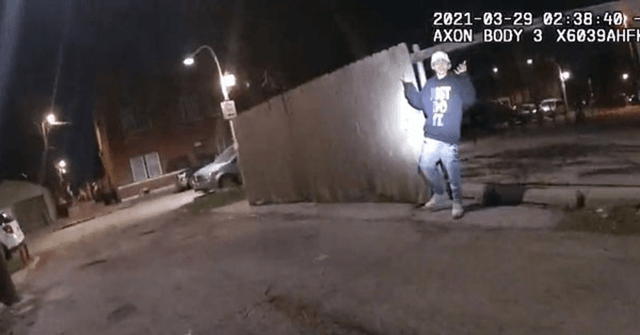 Mayor Lori Lightfoot (D) is calling for Chicago police to reform foot pursuit policy amid the unrest that followed a video release of an officer shooting a 13-year-old on March 29, 2021.

CBS News reported Lightfoot called for the reform on Thursday, the same day on which body cam video of the shooting was released.

The 13-year-old, named Adam Toledo, was shot by an officer about 2:30 a.m. following a foot chase after “reports of gun shots.”

On Thursday, the same day the body cam video was released, the Chicago PD “placed an arrow on a still frame, pointing to what appeared to be a handgun in Toledo’s right hand before Stillman opened fire.”

The Chicago PD commented, “838 milliseconds between gun shown in hand and single shot.”

Minutes into the video “the officer shines a flashlight on a handgun feet from where officers worked frantically to save Toledo’s life.”

The Toledo family attorney, Adeena Weiss Ortiz, said, “I don’t know if the officer had enough time or not. All I know is the officer is trained to not shoot an unarmed individual.”

France 24 quoted Lightfoot admitting there is much that is not known about the incident:

We live in a city that is traumatized by a long history of police violence and misconduct. So while we don’t have enough information to be the judge and jury of this particular situation, it is certainly understandable why so many of our residents are feeling that all too familiar surge of outrage and pain. It is even clearer that trust between our community and law enforcement is far from healed and remains badly broken.

CBS News observed that Lightfoot also called for police foot pursuit reforms, saying, “Foot pursuits put everyone involved at risk: the officers, the person being pursued, and bystanders. We have to do better and I’ve charged the superintendent with bringing me a policy that recognizes how dangerous this is. We can’t afford to lose more lives,”