Former Vice President Dick Cheney dismissed his own record launching an overseas war based on junk intelligence when he claimed Thursday that former President Donald Trump is the worst threat to the republic since the Declaration of Independence was signed.

On Thursday, endangered Wyoming Rep. Liz Cheney, whom the state GOP no longer recognizes as a Republican, published a video of her father’s endorsement.

“In our nation’s 246-year history, there has never been an individual who is a greater threat to our republic than Donald Trump,” said the former vice president under George W. Bush.

“He lost his election, and he lost big,” Dick Cheney added, despite Trump only losing the 2020 contest by less than 50,000 votes across three tipping-point states. Nevertheless, Cheney said, “I know it, he knows it, and deep down I think most Republicans know it.”

The 81-year-old longtime presidential adviser, whose Washington resume stretches from the Ford White House to both Bush administrations, appeared in the one-minute ad less than two weeks before Liz Cheney faces primary voters at the ballot box. The three-term incumbent is up against Trump-endorsed attorney Harriet Hageman, who, according to a July poll sponsored by the Casper-Star Tribune, is up by 22 points.

During the second Bush administration, Dick Cheney was a “chief architect” of the Iraq war, sending American troops into a conflict that would last decades without an exit strategy. The invasion was launched under the pretense that Iraqi dictator Saddam Hussein was harboring weapons of mass destruction (WMDs) based on U.S. intelligence. The classified information cited by the White House to justify the war however, turned out to be one of the worst intelligence failures in modern American history, if not the worst failure.

The oldest living former vice president’s assertion that Trump is the greatest threat to the republic in its existence, meanwhile, glosses over the dozens of historical figures who surely did more harm. Was Jefferson Davis, the president of the Confederacy who oversaw a four-year insurrection, less of a threat than Donald Trump? Was John Wilkes Booth, who shot President Abraham Lincoln, less of a threat? What about Benedict Arnold?

It’s unlikely that Dick Cheney’s video will save Liz’s House seat. According to an Axios poll in March, less than 2 in 5 GOP Wyoming voters reported a favorable opinion of former vice president. Nearly half, 48 percent, said they view Dick Cheney unfavorably. 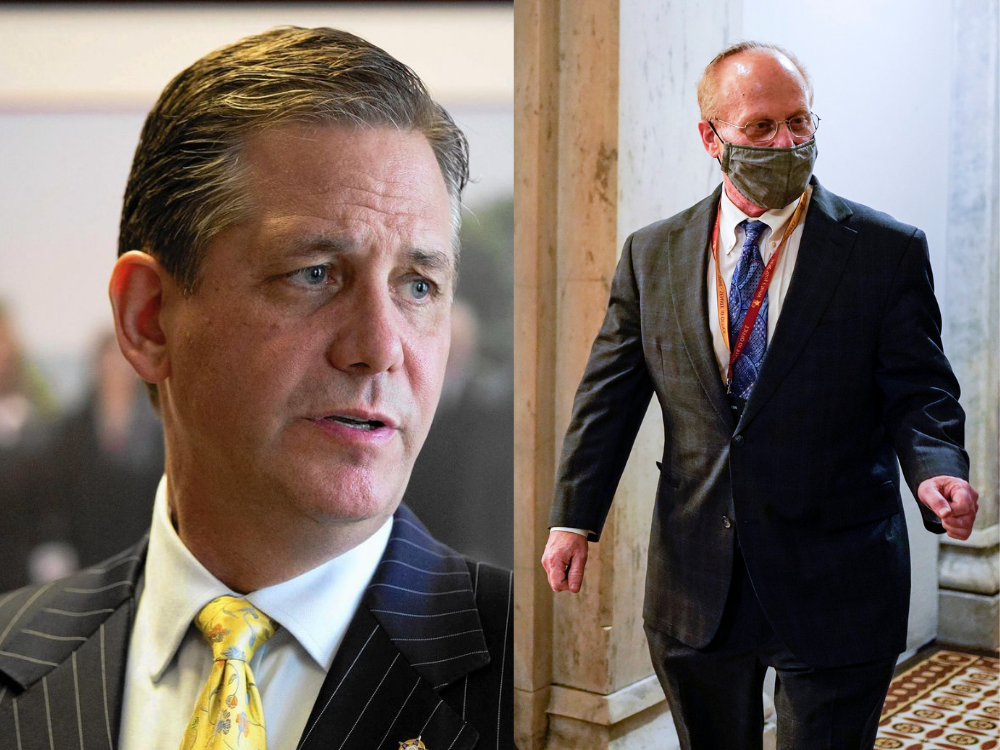 Two of former President Donald Trump’s second impeachment attorneys, Bruce Castor and David Schoen, informed The Federalist Friday morning the GOP ought to make a prudent decision in who is chosen to assume the House Republican Chair position. Liz Cheney, R-Wyo., has been vocal in her disdain for Trump and voted to convict him during impeachment proceedings following the Jan. 6 Capitol breach.

Bruce Castor, appointed by Trump on January 31 to lead his impeachment defense, said Cheney made a poor decision to convict and that GOP leaders ought to be “like-minded” to Trump since he is the “leader” of the current GOP. Castor served as a Pennsylvania district attorney and lost in a race for attorney general in 2004 to Tom Corbett, the eventual Republican governor.

“While I respect Rep. Cheney and believe her a patriot, I think that she should not have, as a matter of law, voted to advance articles of impeachment against President Trump,” Castor said. “I do not presume to have sufficient knowledge among GOP House members to opine who should hold the position of conference chair. The members will make the best, most informed decision on that question. I firmly believe that President Trump is the leader of the Republican Party.”

David Schoen, a Montgomery, Alabama defense attorney who also represented the former president, was more guarded. He said the Biden administration is enacting “radical policy changes” and that it is not time for “infighting.”

“I certainly hope they resolve the issue quickly and in a professional manner,” Schoen said. “Things are moving so rapidly in terms of major radical policy changes with the current administration on the economic and foreign policy fronts and with respect to the restriction of individual and constitutional [rights] — perhaps most especially the right to the full and robust expression of all viewpoints. There is no more time for the appearance of chaos and infighting.”

Cheney wrote an op-ed in The Washington Post on Wednesday in which she claimed “The Republican Party is at a turning point” and reiterated Trump was responsible for the breach. Evidence presented at the trial proved otherwise, given the riot began prior to Trump speaking near the White House.

“Trump has never expressed remorse or regret for the attack of Jan. 6 and now suggests that our elections, and our legal and constitutional system, cannot be trusted to do the will of the people,” Cheney wrote. “This is immensely harmful, especially as we now compete on the world stage against Communist China and its claims that democracy is a failed system.”

Rep. Elise Stefanik, R-N.Y., has emerged as a preferable and more Trump-aligned congresswoman to be chair among some GOP members. House Minority Whip Steve Scalise, R-La., pledged to back her Wednesday. Trump endorsed Stefanik the same day.

“We want leaders who believe in the Make America Great Again movement, and prioritize the values of America first. Elise Stefanik is a far superior choice, and she has my COMPLETE and TOTAL Endorsement for GOP Conference Chair. Elise is a tough and smart communicator!” Trump said in a statement.

Reps. Ann Wagner, R-Mo., and Jackie Walorski, R-Ind., among others, are also considered by congressional aides to be in the running for the third-ranking GOP member spot. 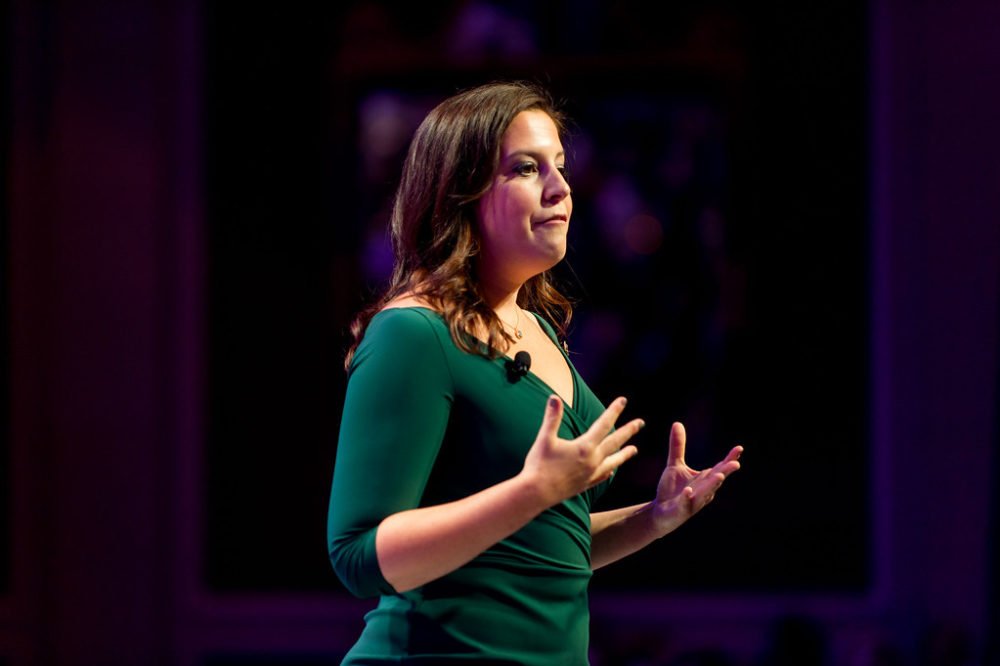 The Communications Director for Rep. Elise Stefanik, R-N.Y., Karoline Leavitt, was temporarily suspended from Twitter on Wednesday. The platform then reinstated Leavitt’s account and told the Washington Examiner the move was “in error.”

Leavitt’s boss is gaining attention as a potential replacement for House Republican Chair Liz Cheney, R-Wyo., who may be ousted from her role as early as next week.

This was not an “error,” as Twitter claimed. This was another purge in their ongoing effort to silence conservatives voices!

We cannot back down to Big Tech Giants! Our movement is too important! https://t.co/RfY4HjwOut

Stefanik is highly critical of Big Tech. After Facebook and Twitter colluded to censor the New York Post’s report on Hunter Biden, Stefanik said the platforms were “engaging in illegal election interference.” Leavitt wrote in an email to Newsweek that Twitter censoring her account was “another example of their tyrannical censorship.”

Twitter frequently censors conservatives, including the Republican President of the United States, and often acts as a Democratic operative, such as their intervention to block the New York Post’s reporting on Hunter Biden just weeks before the November election. 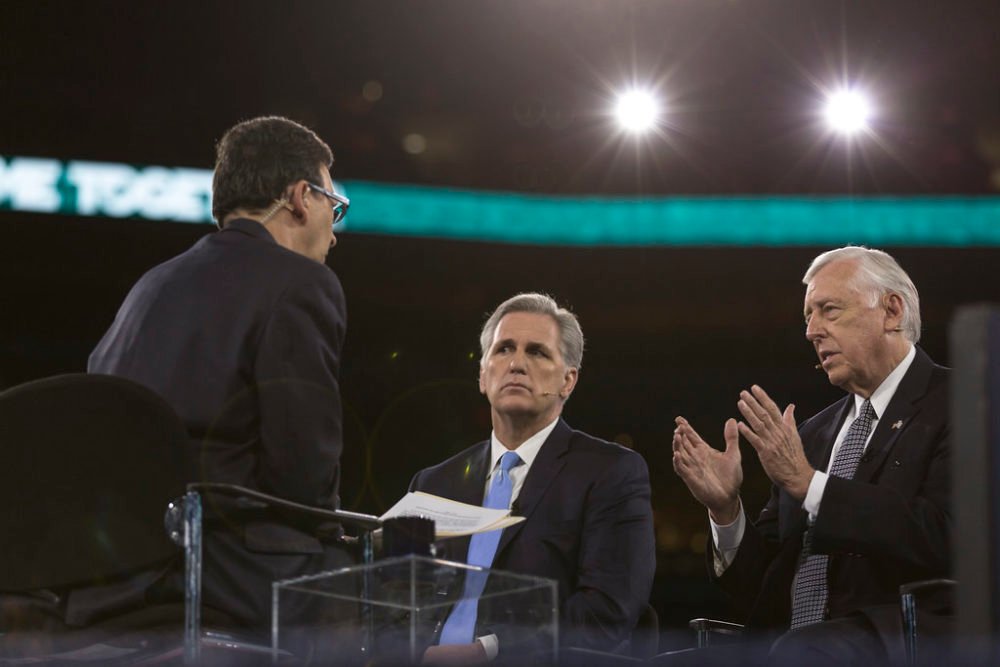 McCarthy appeared on “Fox & Friends” with host Steve Doocy Tuesday morning and said House Republicans have grown frustrated with Cheney who has been the subject of calls to step down from her leadership position for continually aligning herself against her GOP colleagues.

“There’s no concern about how she voted on impeachment. That decision has been made. I have heard from members concerned about her ability to carry out the job as conference chair — to carry out the message,” McCarthy said. “We all need to be working as one if we’re able to win the majority. Remember, majorities are not given; they are earned.”

However, as Axios reported, McCarthy went further in his comments off air to Doocy.

“I think she’s got real problems,” McCarthy allegedly said prior to his interview. “I’ve had it with her. You know, I’ve lost confidence. … Well, someone just has to bring a motion, but I assume that will probably take place.”

In response to McCarthy appearing on Fox News, a spokesman for Cheney told the Washington Examiner, “This is about whether the Republican Party is going to perpetuate lies about the 2020 election and attempt to whitewash what happened on Jan. 6. Liz will not do that.”

“That is the issue,” the spokesman added.

The office of McCarthy did not respond to a request for comment.

Axios reporters were allegedly told last week that Cheney could be removed from being House Republican Chair this month. The Hill reported Monday that “GOP allies” of McCarthy are eying replacements for the Wyoming congresswoman. Some names floated by congressional aides included Elise Stefanik, R-N.Y., Ann Wagner, R-Mo., and Jackie Walorski, R-Ind.