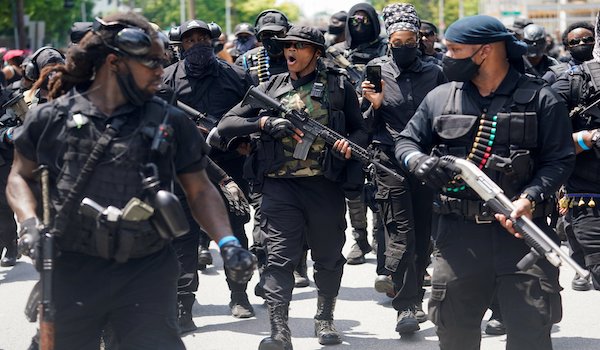 In the wake of a follower of black nationalist leader Louis Farrakhan murdering a Capitol Police officer this month, corporate media outlets are declining to connect his actions to his extremist beliefs. This appears to be becoming the standard for such cases. A look at the deeper ecosystem of media and narrative construction helps explain why.

In response to an Andrew Sullivan article about the recent Atlanta killings in which he noted black Americans are overrepresented in FBI hate-crime offender data, the Daily Kos’s David Neiwert informed the world that using per-capita rates in discussions on black criminality is a “favorite statistical manipulation” by white nationalists, including incarcerated mass murderer Dylann Roof.

Neiwert attempted to support his point by linking to a report he authored while at the Southern Poverty Law Center (SPLC) a few years back and posting: “White people are by far the demographic most likely to commit hate crimes.”

He is indeed right: Whites do commit the majority of hate crimes in America (53 percent of them); far more than do blacks (23 percent). Of course, without acknowledging that whites are 60 percent of the population and blacks 12, this doesn’t illuminate a whole lot.

Neither did a report of Neiwert’s from 2017, in which he downplayed Islamic terrorism cases from 2008 to 2016 because they were less frequent than white, right-wing ones (63 cases versus 115). By failing to adjust for U.S. population differences, though (3.5 million versus 237 million), Neiwert kept from readers that, by his own count, Muslims were 38 times more likely than whites to commit a domestic terrorist act.

Neiwert, a veteran, award-winning journalist, surely knows all this. He also knows that whites in America likely don’t commit 53 percent of all hate crimes.

Since he has written detailed reports burrowing into the U.S. Department of Justice’s statistics on this issue for the SPLC, Neiwert is no doubt aware the agency lumps Hispanic offenders in with white ones when reporting its “white” offender rates—something they curiously don’t do for the victim category. Considering Hispanic general crime rates are higher than that of whites, it’s likely the 53 percent attribution is inflated in relation to whites.

NEW: @7NewsDC has obtained surveillance video that shows Noah Green, the suspect in last week’s Capitol attack.
He’s wearing a white shirt in the video below.
The owner of District Cutlery said Green bought a $300 knife and left the store at 11:28 a.m. Friday morning. pic.twitter.com/TB64q2bmuO

Islamic terror is behind many of America’s mass shootings

But what’s more important about the episode is the trend it helps reveal: Long-time “antiracist” advocates, like Neiwert and the SPLC, unmasking themselves as the kind of racists they supposedly decry. It’s a trend that seems to grow more alarming by the week.

Take the SPLC’s recent decision to stop labeling anti-white, black separatist organizations as “hate groups.” The organization didn’t name the groups they delisted, but the article features a picture of Farrakhan and quotes him. They reasoned: “While these groups can be virulently anti-white, this prejudice does not represent the same threat as white supremacy in America.” So, suggests the long-time “civil rights” advocate, it’s okay to be anti-white, even virulently so.

Elsewhere, they admonished the FBI’s supposed “false and misleading contention regarding threats from Black separatists… [because such groups express] valid anger against very real historical and systemic oppression.”

From Black Panther violence in the post-civil rights era, the Nation of Islam’s “Zebra Killings” in 1973 (in which more than 50 white people are believed to have been killed), or the black Muslim “D.C. Sniper” who admitted trying to kickstart a race war; to the recent antisemitic murders by the Black Hebrew Israelites and the extreme violence linked to Black Lives Matter: all of this points to the FBI’s monitoring of black nationalist developments having a pretty firm basis in reality.

Before this, black nationalist groups on the SPLC’s hate-group list had been growing four-fold since 2000, outnumbering white ones on a 2-to-1 basis. Most would find this surprising, considering the attention devoted to ethno-nationalist groups from the mainstream media and the SPLC is nearly always on whites only.