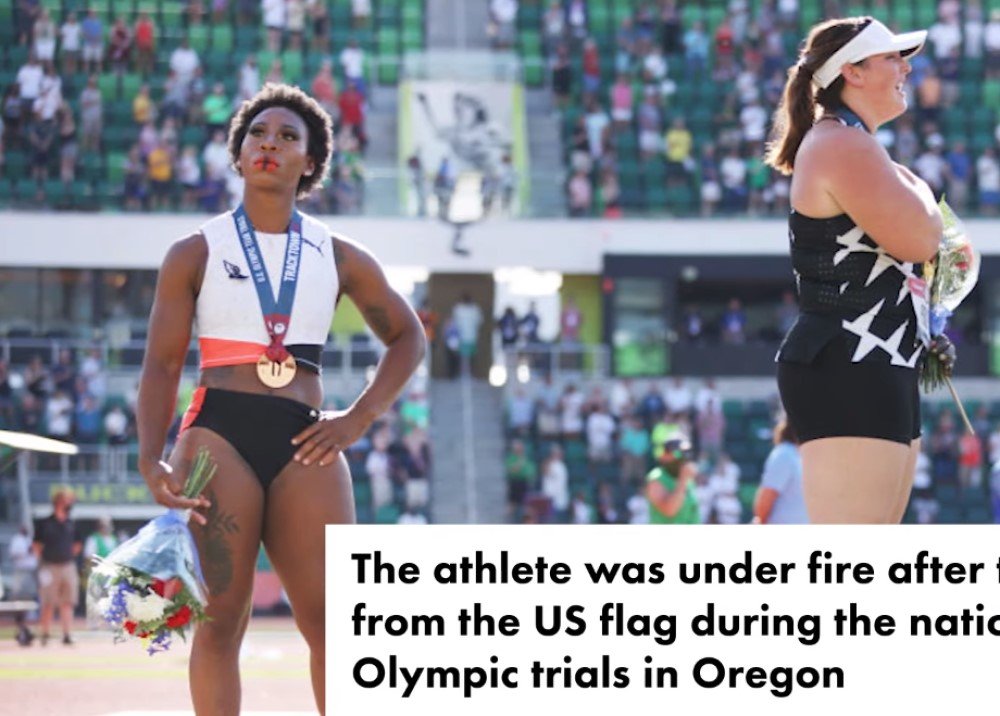 It’s getting so that we can’t go a week without an incident illustrating woke athletes’ contempt for both the national anthem and the American flag.

Last week, hammer-thrower Gwen Berry became the most famous person ever to finish third in the U.S. Olympic trials in a relatively obscure field event. She achieved this rare distinction by choosing to ostentatiously turn her back to the flag and make sophomoric faces as the national anthem played to honor the achievement of Berry and the two women who finished ahead of her in the competition.

Following the pattern that has become all too familiar since NFL quarterback Colin Kaepernick began to popularize kneeling during the national anthem in what we were told was a protest against systemic racism in America, this act of childish disrespect for both her country and her more successful competitors (who stood with their hands over their hearts and whose names are still unknown to all but the most fanatic followers of this sport) turned Berry into a celebrity.

While she has a record of “activism” previous to this incident, the 32-year-old female athlete was just one more unknown struggling for a chance to compete in the spotlight of the Olympics. But in the days that followed her stunt, Berry had her proverbial 15 minutes of fame with the attention of the sports world and the mainstream media ready to hear at length about her reasons for acting in that manner.

Berry didn’t merely claim that playing the anthem at the trial was a “set up” designed to embarrass her. She went on to argue that “The Star Spangled Banner” was just one more outrageous example of American racism and white supremacy. Her argument highlighted that the anthem’s author Francis Scott Key was a slaveholder and that the third stanza of the original poem, although not the version that was officially adopted as the anthem by Congress in 1931, mentions America’s opponents being “hirelings” and “slaves.”

These arguments are not new. The NAACP first called for ditching the anthem in 2017 and woke outlets like The Washington Post have trashed the anthem since Black Lives Matter used the death of George Floyd to gain prominence. But Berry’s sudden celebrity increases the prospect that more American athletes will follow in her footsteps at the Tokyo Olympics later this month.

Days later, the anthem again became a source of controversy when several members of the U.S. Olympic Women’s Soccer team turned away from the flag while a 98-year-old veteran of World War Two was playing the anthem on his harmonica before a warm-up match.

Interestingly, U.S. Soccer did its best to claim the incident was a fiction conjured up by right-wing troublemakers. But the video clearly shows some of the team refusing to look at the flag and that, contrary to those who defended their behavior, none of those who turned away had their hands over their hearts.

In the five years since Kaepernick first popularized the idea of anthem protests, they’ve spread from football to baseball and been front and center during the leadup to this year’s Olympics. Moreover, while Kaepernick and NFL players who agreed with him were at first harshly criticized, the media and even much of the political establishment now lionizes them as heroes of free expression, as White House Press Secretary Jen Psaki’s astonishing support for Berry illustrated.

That latter point shows just how deeply embedded support for the critical race theory notion that America is an incorrigibly racist nation has become in the Democratic Party. If their influence spreads further, then perhaps the best thing to do might be to just give in to the protests and stop playing the anthem at sporting events, if for no other reason than to save these national symbols from more insults. But that would be a mistake.

In 2016, when Kaepernick transformed himself from a fading star into a martyr, his protests were not generally understood as part of a greater struggle to control the culture. But in the last year, as the Black Lives Matter movement went mainstream and indoctrination about white privilege became a dominant force, incidents such as Berry’s tantrum must now be seen as merely one more battle in a crucial war against our history and the ideal of the struggle for American liberty as integral to our national identity.

Far from being just a question of the right to free speech — as Kaepernick’s efforts were initially justified —support for Berry is inextricably tied to ideas like those propagated by The New York Times’ fallacious “1619 Project.” No longer content to merely protest them , the woke critics of the anthem and the flag now want to cancel them. What’s more, they seem to think they can do so as easily as they toppled statues and intimidated much of society into buying the idea that a country that elected a black man president twice and eliminated systemic racism a half-century ago is still irredeemably racist.

Just like the battles being fought around the country in school boards and legislatures over attempts to halt CRT indoctrination, tolerance of disrespect for the anthem and flag is just as important. The left’s hateful ideas that divide Americans against each other solely on the basis of their race and supposed “privilege” are having a toxic impact on society and our democracy.

Despite the fact that elites treat defilers like Berry as heroes, it would be a mistake to concede this battle, if only because the flag and anthem remain popular. For every incident in which spoiled attention-seeking athletes have used the flag or anthem as a punching bag or a platform for disingenuous and false arguments about America, there are likely hundreds in which citizens pause at a game, a graduation, communal ceremony, or religious service to honor their country in a way befitting a nation of patriots.

Consider what happened several times in the last two months at the National Hockey League’s New York Islanders playoff games. As a result of a mic mishap, a new tradition was born. The entire crowd sang the anthem acapella rather than listen to a singer or a recording. The simple patriotism and enthusiasm shown there should give hope to those who think that the weight of leftist opinion has grown too great to resist.

Americans, including our political leaders, should continue to protest any athlete who shows disrespect to the flag and anthem. Their displeasure should be communicated to the various pro leagues and the Olympic committees that tolerate it. Declining ratings for football have shown that Kapernick’s cause is more popular with the media than with those who watch the games.

The grassroots movement to stop the teaching of critical race theory is now so dangerous to the leftist establishment that they are doing everything possible to smear it. The same effort must also be put into the effort to defend our national symbols.

If the left can cancel the anthem, nothing is safe. But if Americans can reclaim the anthem and the flag and return us to a situation where those who attack them are pariahs rather than heroes, then the fight against CRT will also be won.

Richard Grenell Discusses Yates Testimony: “She got away with questioning yesterday”…