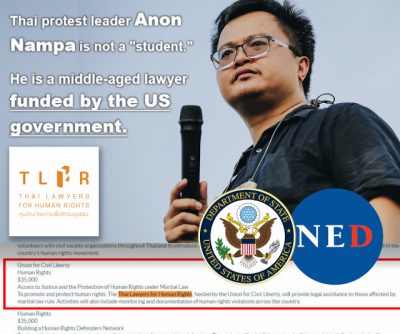 The Western media functions more as lobbyists or even foreign intelligence agencies rather than real journalists by deliberately omitting facts, fabricating others, and all to ensure maximum momentum of what is verified US political interference in a foreign country.

As the Western media had done during the opening phases of the now admittedly US-engineered “Arab Spring” in 2011, it is again attempting to lie about opposition movements across Asia attempting to oust pro-Beijing governments in favor of those that will bolster US primacy in Asia-Pacific.

This includes in Thailand where US-funded unrest is attempting to oust the current government, rewrite the Thai constitution, and roll back Thai-Chinese relations.

Titled, “The bookish Thai rights lawyer who challenged the king,” it never once mentions the name of the organization Anon Nampa works for – Thai Lawyers for Human Rights (TLHR) – or the fact that TLHR is funded by the US government via Washington’s notorious regime change arm, the National Endowment for Democracy (NED).

A profile designed specifically to promote anti-government protests in Thailand rather than to actually inform readers of who Anon Nampa really is and who he really works for – is not journalism. It is lobbying or serves the function of an intelligence agency attempting to support Western-funded assets operating in Thailand.

The Reuters article even includes a video to help lionize both Anon Nampa and his cause which includes ousting the current Thai government and undermining both Thailand’s military and constitutional monarchy.

Again, Anon Nampa’s work for a US government-funded front is never mentioned even once. 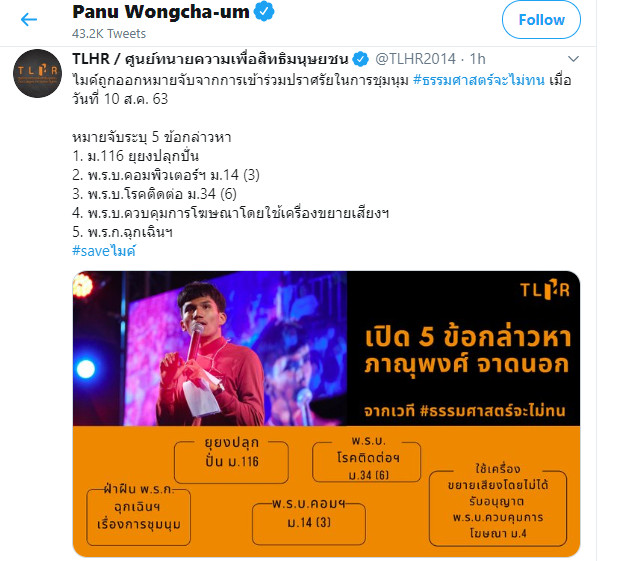 The author, Reuters’ Panu Wongcha-um is most certainly aware of who Anon Nampa is and that he belongs to TLHR – as Panu Wongcha-um regularly retweets TLHR posts on social media. Not only is it troubling that a “journalist” uses his verified Twitter account to promote protests rather than impartially observe and report on them, it suggests that Panu Wongcha-um and Reuters itself is deliberately, knowingly hiding who Anon Nampa really is and who really funds him.

It is a pattern repeated across the entirety of the Western media operating in Thailand who function more as lobbyists and even intelligence agencies rather than as journalists of any kind.

A profile designed specifically to promote anti-government protests in Thailand rather than to actually inform readers of who Anon Nampa really is and who he really works for – is not journalism. It is lobbying or serves the function of an intelligence agency attempting to support Western-funded assets operating in Thailand.

The Western media did likewise not only just last year amid US-funded unrest in Hong Kong, China, but throughout the entirety of the 2011 “Arab Spring” which eventually led to war, US military intervention,  the destruction of multiple nations and the ruination of millions of human lives.

TLHR’s US government funding was openly displayed on the US National Endowment for Democracy (NED) website in 2014.
Its name has since been removed from NED’s website but continues to receive US funding through the NED via the “Union for Civil Liberty” (UCL) of which it is a member.

The UCL is still listed on NED’s current webpage for programs it funds in Thailand. TLHR is listed as a member of UCL on its official website next to other recipients of US NED funding including the Cross Cultural Foundation, the Human Rights Lawyers Association, and the Asian Network for Free Elections (ANFREL).

Even the Bangkok Post previously reported this – despite apparently “forgetting” this fact more recently in its reporting.

The Bangkok Post in a 2016 article titled, “The lawyer preparing to defend herself,” would admit (emphasis added):

…[TLHR] receives all its funding from international donors including the EU, Germany and US-based human rights organisations and embassies of the UK and Canada.

Thus, a front posing as “pro-democracy” and representative of the Thai people receives none of its support from people actually living in Thailand and instead – from foreign capitals with obvious ulterior motives.

In addition to an award presented by the French Embassy, the US State Department awarded TLHR member Sirikan “June” Charoensiri the 2018 “International Women of Courage Award” presented by US First Lady Melania Trump.

The US embassy in Bangkok openly praised TLHR in its own post celebrating the award, exclaiming:

The U.S. Embassy in Bangkok is proud of Sirikan “June” Charoensiri’s work as a lawyer and human rights defender, and for being recognized by the Secretary of State as an International Women of Courage award recipient.

Ms. Sirikan is a co-founder of Thai Lawyers for Human Rights (TLHR), a lawyers’ collective set up to provide pro bono legal services for human rights cases and to document human rights violations.

Thus – an organization carefully cultivated by the US government for years – propped up financially and politically and even awarded for carrying out Washington’s agenda in Thailand – is now leading protests aimed at overthrowing the elected government of Thailand.

The US NED – despite its relatively benign sounding name – is not national – but rather, operates globally. It also does not “promote freedom” or “democracy.” Instead, it uses the alleged promotion of both as cover for what is otherwise regime change aimed at nations whose governments are viewed as obstacles to US interests abroad.
The US NED was admittedly involved in the 2011 “Arab Spring” as reported by the New York Times itself in its  article, “U.S. Groups Helped Nurture Arab Uprisings.” The article would admit the role of organizations like NED in training, equipping, and funding protests that eventually led to regional death, despair, irreversible economic destruction, and enduring destabilization.

The NYT would admit:

A number of the groups and individuals directly involved in the revolts and reforms sweeping the region, including the April 6 Youth Movement in Egypt, the Bahrain Center for Human Rights and grass-roots activists like Entsar Qadhi, a youth leader in Yemen, received training and financing from groups like the International Republican Institute, the National Democratic Institute and Freedom House, a nonprofit human rights organization based in Washington, according to interviews in recent weeks and American diplomatic cables obtained by WikiLeaks.

The Republican and Democratic institutes are loosely affiliated with the Republican and Democratic Parties. They were created by Congress and are financed through the National Endowment for Democracy, which was set up in 1983 to channel grants for promoting democracy in developing nations. The National Endowment receives about $100 million annually from Congress. Freedom House also gets the bulk of its money from the American government, mainly from the State Department.

While the NYT claims this money was spent “promoting democracy” it clearly served as cover for what was in reality a violent campaign of US-backed regime change which culminated in multiple direct US military interventions, the destruction of Libya, and the near destruction of Syria.

One thing that never materialized was “democracy.” 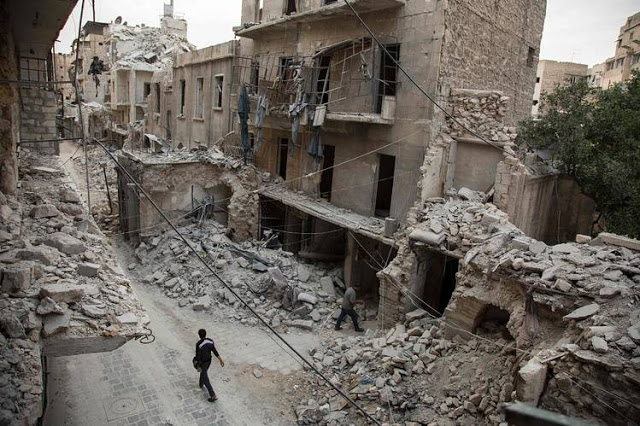 Also a product of the “Arab Spring” is US regime change efforts in Yemen and its military support for Saudi Arabia’s ongoing war against the country. It has led to what the UN itself has called “the world’s worst humanitarian crisis.”

Considering what US “democracy promotion” has done to North Africa and the Middle East – it would seem US attempts to replicate its “success” in Asia should be a topic of great interest for real journalists.

Yet the Western media operating in Thailand seems intent on covering up these facts specifically to allow as much momentum in favor of unrest to grow as possible – thus enabling rather than reporting on US destabilization efforts aimed at the Thai government – and the governments of other nations across the region under similar attack.

This article was originally published on Land Destroyer Report.

Tony Cartalucci is a frequent contributor to Global Research.

All images in this article are from LDR unless otherwise stated 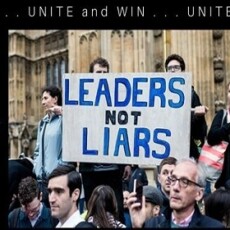