John Barilaro’s last shreds of credibility have been destroyed this week with evidence given at the NSW Parliament inquiry but what has been overlooked so far is what role his mistress Jennifer Lugsdin played and what benefits she received. Barilaro has resigned from the $500,000 New York job position but there are still at least 4 inquiries, 2 government and 2 NSW ICAC, that are still afoot and below is relevant evidence that all the media are refusing to report, so I will.

This article is a follow-up from last week’s article: “John Barilaro’s fraud, theft and sexual affairs likely to take down NSW Premier Dominic Perrottet” which starts off “John Barilaro’s dodgy appointment to a $500,000 NSW Government job in New York will face an NSW Parliament Upper House inquiry on Wednesday next week (29/6/22) but the media are failing to report some key facts of corruption.” (Click here to read the article)

Jennifer Lugsdin worked directly for John Barilaro for 2 years then moved to Investment NSW for 5 months from August 2021 until December 2021 when her affair with John Barilaro was exposed in the media and she left immediately. Below is a screenshot of her LinkedIn page:

Below is the article from December 2021 that outed Jennifer Lugsdin as John Barilaro’s “new partner” and she left her Senior Media Advisor role at Investment NSW. Who knew what and when? That is a question Investment NSW CEO Amy Brown should have been asked when she gave evidence on Wednesday (29/6/22) at the NSW Parliament inquiry. 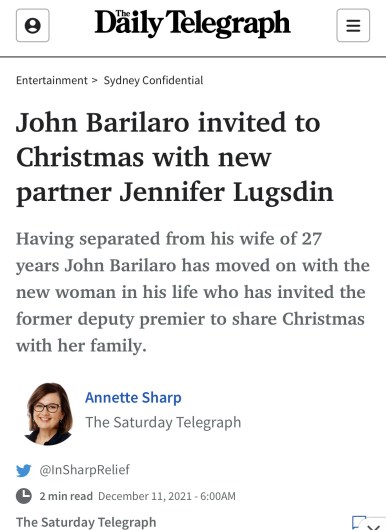 Below is the video I published on Friday (1/7/22) about this matter which also has video of John Barilaro ducking and weaving at NSW ICAC about his “intimate personal relationships”. The video also adds other relevant information to this article:

The NSW Parliament held a public hearing on Wednesday which was the first day of their continuing investigation into John Barilaro’s appointment to the $500,000 job. Barilaro was smashed in all the media, especially social media, as it was revealed by the only witness, Investment NSW CEO Amy Brown, that Barilaro had set up the job and withdrawn the job offer from the candidate who had been offered the role. And then Amy Brown offered Barilaro the job after another “independent recruitment process”.

After Amy Brown’s performance giving evidence under oath, the stenches of corruption could be smelt around the globe and social media unloaded. I posted the below two messages on Twitter as well as others: 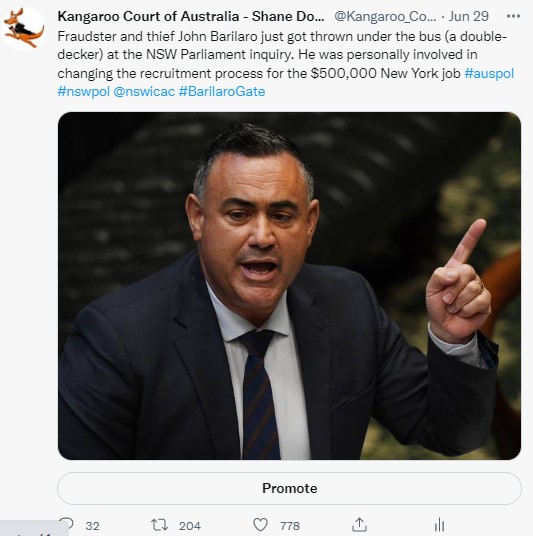 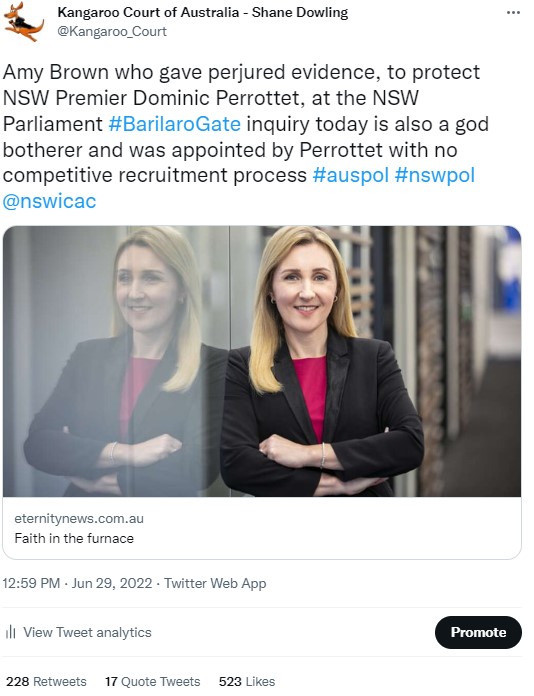 The NSW Parliament inquiry resumes next week and is quite broad as it says on their website “This inquiry was self-referred on 23 June 2022 to inquire into and report on the appointment of Mr John Barilaro as Senior Trade and Investment Commissioner to the Americas and any other related matter.” (Click here to see it on the government website) 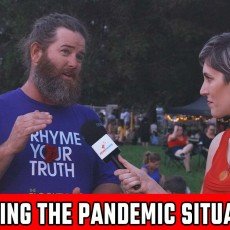 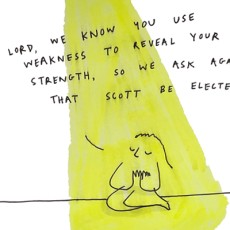 Crikey! Canberra Declaration’s Election Prayer Campaign is in the News 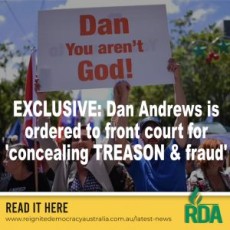 EXCLUSIVE: Dan Andrews is ordered to front court for ‘concealing TREASON and fraud’ in an extraordinary win by anti-lockdown campaigners who convinced a bush court to accept a private prosecution