1. Remember, the Special Counsel was appointed in May 2017, and from then until April 2019 any matter which had anything to do with Spygate or Trump/Russia, was managed exclusively by the Special Counsel team. [Rosenstein testified to this June 2, 2020]

2. The Carter Page FISA warrant of June 29, 2017, was renewed during the tenure of the Special Counsel. They alone ran the FISA process for the third renewal. 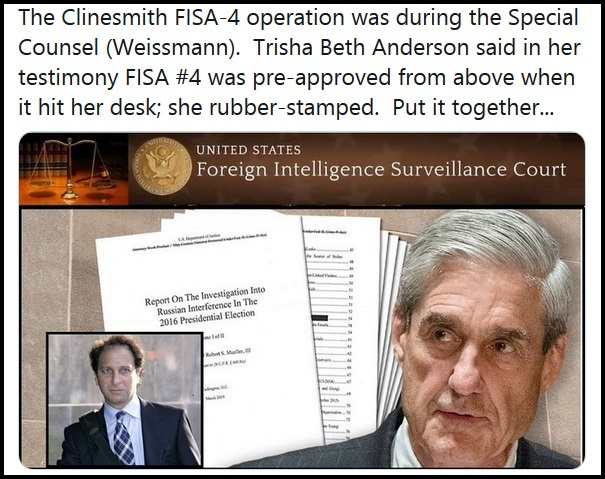 3. Kevin Clinesmith’s boss at the FBI during the period was Trisha Beth Anderson. [LINK]

4. The Clinesmith criminal indictment (actually an “information”) informs that, while the Special Counsel was running the DOJ, and Andy McCabe was running the FBI, McCabe’s deputy at the FBI, Tricia Anderson, made this request to Clinesmith:

We need some clarification on [Carter Page]. There is an indication that he may be a “[digraph] source.”

5. Why is this “digraph” redacted from the Clinesmith information?

7. Why is the sentence following that critical question redacted from the Clinesmith indictment with “….”?

9. Why again is the critical “digraph” source code redacted out of the Clinesmith indictment?

10. The entire issue is that Clinesmith’s boss, Trisha Anderson, is asking Clinesmith to ask the CIA whether Carter Page is any kind of CIA informant. Why redact out that specific material from the Clinesmith indictment, unless the intent is to conceal that material?

11. Why is the specific 2-digit number “digraph” supposedly secret, and why is the “type of source” omitted form the criminal information? Clinesmith’s boss, Tricia Anderson, seems to be asking, “what is this kind of ‘source’ is Carter Page? He’s claiming to be a source, so check with the CIA to verify ‘if he is any kind of source.’”

12. Again, despite the redaction of what appears to be critical exchange, the Clinesmith indictment still includes his boss (Tricia) asking for official CIA confirmation about Carter Page, “whatever kind of source he is.”

13. We know from the Clinesmith indictment that (at a minimum) he reported back to his boss, Tricia Anderson, that Carter Page “was a subsource” for the CIA.

15. And we know without question that Tricia Anderson’s deputy – Clinesmith- had been informed by the CIA that the CIA has already informed the DOJ and the FBI about Carter Page’s status, a year earlier, on August 17, 2016.

16. The CIA gave Clinesmith an email with all of that information. [LINK]

17. Without any push-back from the DOJ or FBI, in 2020, in connection with Clinesmith’s guilty plea, he stated that he (Clinesmith) never bothered to read the Carter Page file that the CIA gave to him. [LINK]

18. His boss, Tricia Anderson, had asked him specifically to check with the CIA as to the status of Carter Page. The CIA confirmed that Carter Page was some kind of source, and provided the file explaining it all.

19. Clinesmith first reports to his boss, Tricia Anderson, that the CIA has confirmed that Carter Page is some kind of a source – a “sub-source,” but we don’t know exactly because the “digraph” code describing what kind of source he was had been concealed out of the indictment.

20. What possible reason is there for the DOJ to redact out that code?

21. When Clinesmith reports to his Boss -Trisha Anderson- that Carter Page is definitely some kind of CIA source, without question Trisha by her own email now knows:

22. Yet a few days later, Clinesmith sends an email to his boss, Trisha Anderson, evidencing for her file that Carter Page “was never a source.” Yet the DOJ’s indictment redacts the “digraph” code about this.

23. Isn’t it a logical conclusion that the combination of the following highlight a DOJ whitewash: (i) the redactions of the digraph code from the indictment, “(ii) the DOJ allowing Clinesmith, unchallenged, to assert that he “did not recall ever reviewing the documents referenced in the [CIA’s] email” disclosing Carter Page’s informant status with the CIA.

24. And how could veteran FBI attorneys (Anderson and Clinesmith), in the space of a few days, twist “A” into “B”?

Getting “clarification on [Carter Page]. There is an indication that he may be a “ [digraph] source… we would need to disclose in our next FISA renewal… To that end….[contact the CIA and find out]: (1) Is [Carter Page] a source in any capacity? and (2) If he is, what is a [digraph] source (or what ever type of source he is)?”

27. Clinesmith’s boss, Trisha Anderson, knew this change of story was a smoking gun of a fix.  How do we know that? Two issues:

28. First, the Clinesmith indictment concedes it, although it is buried.  Trish Anderson asked Clinesmith whether the FBI “had it in writing” from the CIA that Carter Page “was not a source.”  That’s not a question in this scenario, that’s an instruction.

29. Anderson and Clinesmith both knew any written claim that Carter Page was not a source would be untrue, because the CIA had informed them specifically that Carter Page was working with the CIA as a [digraph], and that his role was described in the CIA briefing memo to the Crossfire Hurricane team dated August 17, 2016. [LINK]

30. The Crossfire Hurricane team consisted of many senior members of the DOJ and FBI who eventually overlapped into the Special Counsel [They had to know what was going on with this June 29, 2017 renewal]

32. Clinesmith also knew Carter Page was a source for the CIA. He deliberately falsified the CIA email to try and create a CYA position for his boss, Trish Anderson. For this event he has now plead guilty to a felony.

33. What happened during the four days: June 15, 2017 to June 19, 2017, that caused FBI attorney Kevin Clinesmith to commit a felony by doctoring an email from the CIA?

34. What happened during the four days June 15 to June 19, 2017, that caused senior FBI Deputy Trish Anderson to pivot from asking about Carter Page’s status with the CIA “in any capacity, and whatever type of source he is” – to later telling her subordinate, Clinesmith, to “get in writing” something from the CIA that she knew was untrue?

35. Trisha Beth Anderson signed-off on the Carter Page FISA application, a title-1 surveillance warrant, under penalty of perjury…. even though we know from her own writing the application contained materially false information and omissions.

36. Trisha Beth Anderson claims she signed the FISA affidavit, which she knew to be incorrect, because it was presented to her in a rather unusual manner. [LINK]

37. Why did she do this? She disclosed why in her previously hidden testimony to congress (August 2018). [LINK]

38. Anderson had signed-off on earlier Page FISA applications because they came to her already signed: ex. by James Comey (FBI) and Sally Yates (DOJ).

39. When she signed-off on the last Carter Page FISA renewal (June 29, 2017) the Special Counsel was now running the DOJ.  Andrew McCabe was in position and running the FBI

40. So who caused Trisha Beth Anderson to sign-off on the FISA application she knew was false?

41. Why did Anderson ask her subordinate, Clinesmith, to make sure there was something in writing in the file to back up this false statement? Who instructed her to do this?

42. She signed-off the prior Carter Page FISA’s because they were presented to her pre-approved and pre-signed by the FBI  and and DOJ leadership.

43. Deputy FBI Director Andrew McCabe was Anderson’s FBI boss when she signed-off on what she knew was a false affidavit. Rod Rosenstein was Deputy Attorney General. Who pre-approved the false filing?

44. Additionally, on June 29, 2017, the special counsel was in control of the DOJ and DOJ-NSD. This third renewal was under their authority.

45. Who told Trish Anderson to change her stor yand paper the file with a false claim that Carter Page was somehow not a CIA asset?

46. AG Bill Barr has known since December 9, 2019, about Kevin Clinesmith’s felony forgery when OIG Inspector General Michael Horowitz made a criminal referral for the discovery. Why delay the indictment until August 20, 2020.

What I also strongly suspect is that Bill Barr is using his oft stated “I will not allow the DOJ to be political” as a crutch in his preservation approach. If nothing from the world or sphere of politics is allowed to enter the world or sphere of the DOJ then what is supposed to happen with all those years of congressional evidence gathering?

If my suspicions are correct; and keep in mind I have made first hand contact with the Durham investigators to confirm their intense alignment with Barr’s directive; then nothing from any embargoed political silo will ever be prosecuted regardless of how it percolates out.

If you read all the material you will see there is clearly no arrangement for Kevin Clinesmith to have provided any other evidence to the DOJ. This is a one-and-done move just like James Wolfe. The parallels are very similar.

The media lie. All the time.