“The data that we have clearly indicates the value of the third dose,” the BioNTech CEO said.

Ugur Sahin, the CEO of BioNTech, declared that a new vaccine designed to tackle the Omicron variant would need to be given in three doses, after taking the initial vaccine and booster shots.

Sahin spoke to the media during a press conference discussing the effectiveness of the Pfizer-BioNTech vaccine against the new Omicron coronavirus variant. In a statement released on Wednesday, the pharmaceutical companies claimed that an initial laboratory study showed that a booster shot of the initial vaccine would give protection against the Omicron variant comparable to the initial COVID-19 strain after two doses.

“Our preliminary, first dataset indicate that a third dose could still offer a sufficient level of protection from disease of any severity caused by the Omicron variant,” Sahin said in a statement. “Broad vaccination and booster campaigns around the world could help us to better protect people everywhere and to get through the winter season.”

However, the statement revealed that BioNTech was working on an “adapted” vaccine for the Omicron variant. Speaking at the press conference, Sahin argued that it was “very clear” that for their Omicron vaccine, people should take three doses, rather than two.

One journalist asked Sahin as to whether people should take a booster shot now after having two doses of the initial vaccine, or whether they should wait for the Omicron specific vaccine, with Sahin saying it was “very clear” that they should take both, meaning that people could potentially have to take six shots in total.

“The data that we have clearly indicates the value of the third dose, and we should be really clear about that, that an Omicron vaccine, even if you start supply in March, would not be broadly available,” Sahin said. “We would start with the first 25, 50, maybe 75 million doses. But the best [way] to ensure better protection would be have to a booster shot.”

Over the weekend, a scientific study was released in which researchers suggest the Omicron variant may share genetic code with the virus responsible for causing the common cold, potentially explaining both why the Omicron variant of the virus is generally described as mild and spreads quickly. The paper is awaiting peer review.

Despite the Omicron variant repeatedly surfacing in vaccinated individuals and scientists maintaining that it is a very mild variant of COVID-19, Democrats including Joe Biden and his key advisors have insisted that even more mass vaccination is the only viable option. 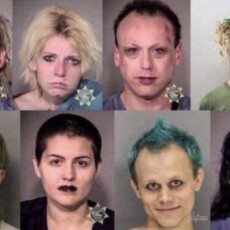 An Inspiring Message from Kevin Annett 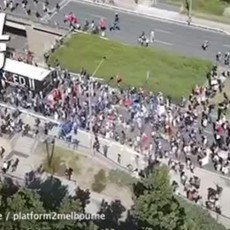 A bird’s eye view of the convoy heading to Parliament House right now in Canberra.