Every effort counts. Any step you can take against the great fraudemic really helps. Here’s an email I just received from a friend (slightly edited for decorum):

Why can’t the public or courts of Aus call the Government out simply on fraud???

Obviously, THIS WHOLE VIRUS CRAP THING IS FRAUD and CRIMINAL towards the public, they’re not serving us at all!

What worries me, if they KNOW? it’s a fraud, then they’re pushing an Agenda….  AND, also when these numbats read the news on TV and radio it’s also FRAUD!

–end of email from friend

A young Australian lawyer, Ms Serene Teffafa did what lawyers are supposed to do – she consulted The Law to see what could be done. She found the basis for a lawsuit by citizens.

Serene – what a nice name — has put out an invitation to all Aussies to join a class action. Her website is AdvocateMe.com.au. Her office address is PO Box 7015 Reservoir VIC 3073. (Ah, Victoria…)

Gumshoe will now print exactly what is on that website, nothing added or subtracted:

Under both Federal and States and Territories’ legislation, consideration must be given to whether a public health risk is serious and significant enough to necessitate emergency declarations. In doing so, Governments must balance the competing need to protect the public interest, with the need to protect human rights.

Given the initial novel nature of SARS-CoV-2 and the little knowledge we had about its origins and behaviour, initial Government actions may have been justified. However, over the past five months it has become evident that the decision-makers responsible for the management of SARS-COV-2 public health risks have made decisions that are significantly disproportionate to the risks and are targeting the healthy members of our communities, at the risk of neglecting the most vulnerable.

We are empathetic towards families that have lost loved ones to COVID-19, but we also recognise that as a society, we must take equal interest in all public health risks, including the biggest killers in this country being cardiovascular disease, cancer and respiratory illnesses including pneumonia and asthma.

It has become evident that our Prime Minister Scott Morrison is aligning himself with international vaccine companies such as AstraZeneca that are morally bankrupt (having a history of being severely fined for false claims, kickbacks and bribery and unapproved promotion of medical products). Mr Morrison is also working closely with CEPI and its chair Jane Halton (a former Australian public servant) who is now Commissioner of the National COVID-19 Commission.

It is troubling that our Governments have overlooked Australian companies with better records in terms of safety, efficacy and ethical standards.

Meanwhile, the decision-makers at the States and Territories have echoed the troubling trend of focusing on quarantining healthy members of our communities at the risk of denying the most affected members of our community; the elderly, health workers and other vulnerable patients, the successful drug Ivermectin.

Dr Borody provides “The Government could end the pandemic by openly encouraging GPs to prescribe these TGA approved medications. Those who test positive, are identified in contact tracing, as well as those in high-risk groups like the elderly and healthcare workers, can then access the therapy quickly.”

Meanwhile our Australian Hospitals are struggling as a result of our Government’s failure to provide them with appropriate Personal Protecting Equipment. The rest of society is paralysed as a result of the destruction of businesses, loss of income and opportunity, and increase in mental health issues, suicides, family violence, child abuse and police and other officials’ brutality.

It is problematic that massive funds are being directed at controlling and confining the movements of healthy populations whilst our health systems are being denied basic materials.

We have evidence that our Governments are not applying their own laws and are introducing draconian legislation that overrides the Constitution, the Biosecurity Act 2015 and Human Rights legislative frameworks. As a result healthy people are being treated as suspect COVID-19.

This is an invitation for all Australians impacted by these draconian changes to join our Class Action. These are the issues we’ve identified:-

Before sending you our costs agreement and disclosure statement we wanted to explain thoroughly the process of a class action in Australia and our legal strategy.

We started our Class Action with a focus to seek a declaration and prohibition order, through judicial review, that the directives issued by the States and Territories, to require influenza vaccines on visitors of aged care facilities and employees affected by the directives, be declared unlawful and unreasonable and prohibition be granted, so that these directives cannot occur in the future, in the same manner.

As we progressed, we realised that the issues impacting our clients now extend beyond the vaccine issue and involve unlawful detention, testing (including false positives), contact tracing, masks, denial of cross border travel, denial of overseas travel, problems with returning Australians home, failures of diagnosis and recording of deaths, police brutality, fines, and Court summonses, unreasonable business closures and restricting freedom of movement.

We also recognised that there’s an urgent need to stop the Declaration of a State of Disaster in Victoria because it’s not supported by the data and statistics.

We felt the best approach would be to launch a judicial review process in relation to all the directives that are impacting Australians across all States and Territories.

Judicial review means to review a matter to ensure that the power exercised was properly exercised, in accordance with the statute or legislation. Another way of putting this is to determine if the decision was lawful. This can mean a number of things. For example, it could mean that a decision was made ultra vires, or outside the decision maker’s scope of power or authority. Or it could mean that the decision-maker took into account irrelevant factors, or failed to take into consideration relevant factors. In determining whether a decision-maker exercised his or her power within the law, the first place to look is the legislation that grants that decision-maker the power to make the decision.

We decided that the best way forward is to approach the process through judicial review and in part, a Constitutional challenge on the following basis:

The case will also raise a number of issues with regards to human rights and our medical right for freedom of choice, liberty and self-determination.

The process of judicial review does not typically have a compensation component, as what we are seeking to do is declare the decision and/or directive invalid and stop the decision-maker from making the same decision and/or directive again. Once we achieve this outcome, then I could look specifically at each individual case with regards to the unique aspects that may invoke compensatory considerations. However, the purpose of the court case will not be to seek compensatory relief, but rather a reaffirmation of our rights and liberties and to stop the States and Territories from continuing with their course of conduct.

In effect, the main purpose of this action is to stop our administrators from taking away our basic rights not to be treated or labelled as sick and having to prove our health. Our administrators do not have the right to restrict our movements in the manner that they have and impose on us restrictions that are unreasonable and disproportionate to the risks. They also cannot medicate, treat, test, examine, detain and vaccinate us without ensuring that the strict processes of the Biosecurity Act 2015 are applied.

We have detailed the concerns of all of our clients to date, by writing to all Governments, States, Territories and Federal, which is available to view below, to show you how serious we are in advancing our actions and that our actions are based on sound evidence. We have also comprehensively set out the processes involved in our class action, in the following links.

Please if you can initially complete the form below. Once you complete the form, you will be sent out an email with our costs agreement and disclosure statement for signing and return. You could nominate an amount of costs contribution between $250 and $2000. This is a once off payment and it is capped, so we will not request any further payments from you. If you wish to be an applicant representative, we will contact you in due course to discuss, but we expect you to make a minimum contribution of $100.

A reminder that if you select your state as Victoria, we will automatically put you towards our Injunctive Relief Claim in Victoria against the State of Disaster as well as the National Class Action in relation to the State of Emergency- you will not be required to fill in any further forms.

We can’t wait to rock it out with you!

We are so proud of the family we have built.

Complete the below form to secure your place in this class action.

–end of material from Serene Teffafa.

Tone of Voice Is Everything

In case you missed it, in a recent Comment at Gumshoe, Ms Yolande Norris-Clark has made a 5-minute at-home video (her handle is “bauhauswife”) letting us know what this business is all about (or isn’t all about, as the case may be).

Please see the good YouTube comments that have been written to her, under the video. too: 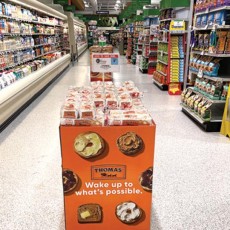 Understanding That The Aisles of Choices 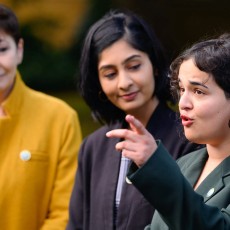