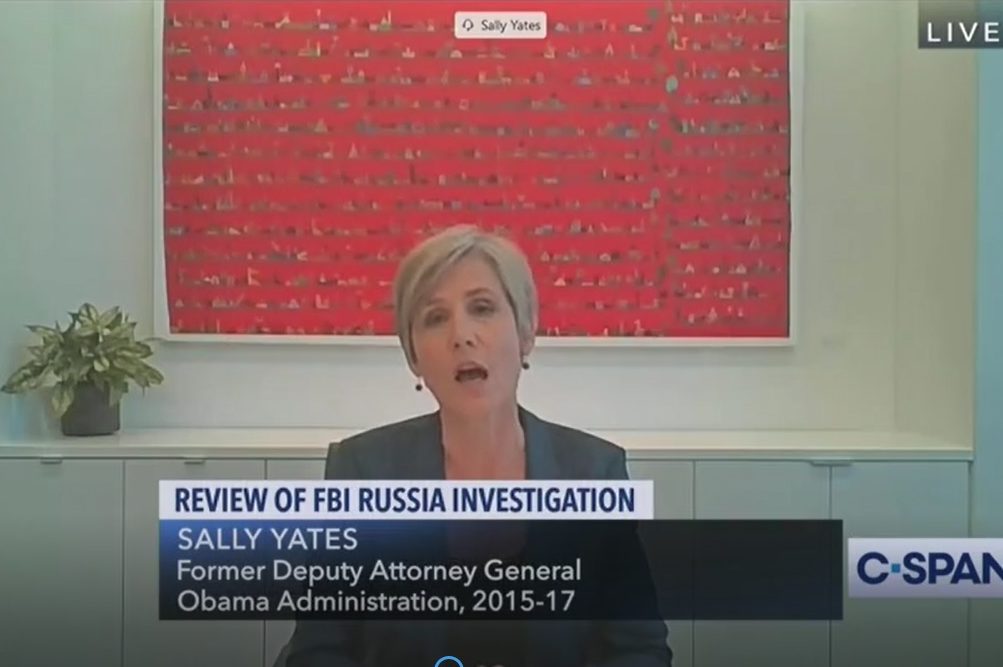 On Wednesday, former Acting Attorney General Sally Yates testified via a live video link before the Senate Judiciary Committee. With a sure demeanor, the long-time federal prosecutor presented herself as an apolitical creature concerned only with Russian interference in the 2016 election

Yet, over the three hours she testified, Yates proved herself ignorant of basic facts and ready to dissemble rather than admit that the Obama administration spied on the Trump campaign. Most appallingly, Yates unequivocally condemned Attorney General William Barr’s decision to dismiss the criminal charge against Michael Flynn, and in doing so, she exposed herself as no better than the more blatant political operatives involved in the Crossfire Hurricane investigation.

Sally Yates Knew Nothing and Saw Nothing

While much of Wednesday’s hearing focused on the four fraudulent Foreign Intelligence Surveillance Act applications submitted to the FISA court, and Yates’s approval of two of those applications, the senators’ questioning of the one-time acting attorney general revealed Yates had little understanding of the Crossfire Hurricane investigation and still lacks a solid grasp on the facts developed since.

For instance, Yates testified that on January 4, 2017, when agents had originally decided to close the investigation into Flynn, she had not even known an investigation had been opened on Flynn. Even now, Yates apparently still does not know that the supposed impetus for opening the investigation into the Trump campaign was fallacious—that an individual connected to Russian intelligence supposedly offered then-Trump campaign advisor George Papadopoulos emails damaging to Hillary Clinton.

The FBI learned, Yates testified, “that someone affiliated with the Russians had actually approached a foreign policy advisor of the Trump campaign and had told them that the Russians had dirt on Hillary Clinton in the form of thousand of emails, that could be released anonymously and wanted to know if the campaign was interested in this.”

Later, Sen. Lindsey Graham pushed Yates on this testimony to see if she understood that the individual who had approached Papadopoulos, Joseph Mifsud, was not acting on behalf of Putin. Was that individual “a Russian agent?” Graham queried. “He was connected with Russian intelligence,” Yates responded.

Graham’s guffaw said it all. While Joseph Mifsud’s role in SpyGate may not yet be clear, Yates’ belief that Mifsud was “connected with Russian intelligence” shows she hasn’t a clue about even the most fundamental facts underlying the investigation into the Trump campaign.

There were many other facts Yates did not seem to know, or if she did know them, there is a more troubling implication: the former acting attorney general attempted to mislead the Judiciary Committee and the public. For instance, in discussing the intel the FBI had received concerning Mifsud’s conversation with Papadopoulos about the “thousands of emails,” Yates claimed the FBI received this information in May and then “it actually happened—the emails were then dumped in July.”

But the emails “dumped” in July were those hacked from the Democratic National Committee and released by WikiLeaks, which was an entirely different set of emails than the “thousands of emails” Papadopoulos said Mifsud had claimed the Russian had: According to the Special Counsel’s office, Papadopoulos “admitted” that Mifsud told him “the Russians had emails of Clinton.”

Whether Yates understood this distinction is unclear. It is also unclear which is worse—that she was ignorant on this basic fact or understood the fact but sought to conflate the two distinct categories of emails to justify the investigation.

Yates also seemed ignorant Russia’s end game in interfering in the 2016 election. She told the Judiciary Committee that Russia was “trying to put a thumb on the scale for one particular candidate, to try to aid the election of Donald Trump and to hurt Hillary Clinton.” But, as Rep. Devin Nunes told The Federalist, “the idea that Putin thought he could install Trump in the White House by buying cheap Facebook ads is absurd.”

In fact, “some of the Russian ads were anti-Trump,” Nunes added, showing Putin’s true purpose “was to sow division and pit Americans against each other.” “And because of the Democrats’ and the media’s hysterical accusations that Trump conspired with his campaign, it succeeded beyond Putin’s wildest dreams,” the California Republican noted.

Also troubling was Yates’ testimony that “the Obama administration was not surveilling the Donald Trump campaign.” She then pushed the same debunked talking point Democrats and the media have been regurgitating for three years, telling the Judiciary Committee that Carter Page “was not a member of the Trump campaign at the time we initiated the FISA.”

But that Page was not a member of the Trump campaign at the time the DOJ obtained the FISA surveillance warrant—illegally, as we now know—does not mean the Trump campaign was not surveilled, because the FISA order gave the FBI access to Page’s past electronic communications. In fact, the IG report stated, “the evidence collected during the first FISA application time period demonstrated that Carter Page had access to individuals in Russia and he was communicating with people in the Trump campaign.” Moreover, as I detailed:

While we do not know how many campaign emails and communications were swept into the FISA surveillance of Page, we do know the FBI would have had access to all campaign emails that originated from Page or included him as a recipient. And the number of emails accessed appears large, given that the IG report stated that 45 days into the surveillance order, the FBI ‘team had not reviewed all of the emails the first FISA application yielded and believed there were additional emails not yet collected.’ The IG report also established that the Crossfire Hurricane team recognized ‘the possibility that the FISA collection would include sensitive political campaign related information.’

When Halper recorded his conversation with Clovis on September 1, 2016, he asked several questions about sensitive campaign strategies, such as “whether the Trump campaign was planning an ‘October Surprise.’” Clovis also shared with Halper “additional comments about the internal structure, organization, and functioning of the Trump campaign.”

And then there was the FBI’s use of agent Joe Pientka to spy on Trump and Flynn during a campaign briefing. But sure, Sally, there was no surveillance of the Trump campaign.

Fact-Less Smearing Of Flynn and Barr

Yates’ ignorance of these facts—or her purposefully slanting of them—is bad. But what is worse is what she did to Flynn and Barr: She disparaged them without knowing the facts.

Yates unequivocally declared, under oath, that when the FBI questioned Flynn concerning his conversations with the Russian ambassador, “the continuing investigation into Michael Flynn was legitimate.” When asked if Flynn’s “lies to the FBI were material,” Yates intoned “they certainly were.” Yates further testified that the Department of Justice’s motion to dismiss Flynn’s case was “highly irregular,” adding that “there’s no issue with respect to the materiality here, nor to the government’s ability to be able to prove falsity.”

The question of “materiality” and “falsity” were key to the criminal charge the special counsel’s office brought against Flynn for lying to the FBI agents who questioned him about his conversations with the Russian ambassador. But after appointing an outside U.S. attorney, Missouri-based Jeff Jensen, to review the Flynn prosecution, the Department of Justice filed a motion to dismiss the charge, concluding the FBI’s questioning of Flynn was not part of a legitimate investigation and thus any false statements he made were not material. The DOJ also noted that it did not believe it could prove Flynn had knowingly made a false statement.

The full results of Jensen’s investigation have yet to be made public, and that alone should have cautioned Yates from commenting on the case. But her testimony suggests much more than carelessness, it suggests—again—an ignorance of the facts or a desire to deceive.

Did You Even Read the Documents?

Throughout her testimony about the questioning of Flynn, Yates stressed that the FBI was not investigating a Logan Act violation but conducting a counterintelligence investigation. “I was operating under the impression that this interview of General Flynn was in the context of the Crossfire Hurricane investigation. That being trying to discern what the connections were between the Trump campaign and the Russians,” Yates explained to the committee.

Other documents establish that the FBI agents did not believe Flynn had lied to them. It was this (and likely other) evidence that convinced U.S. Attorney Jensen to recommend the charge against Flynn be dismissed.

Yates’ entire basis for declaring the questioning of Flynn “legitimate” was her “impression” that the FBI agents interviewed Flynn in the context of the Crossfire Hurricane investigation. Her “impression,” though, was wrong.

As Flynn’s attorney Sidney Powell told The Federalist, “Yates’ comments ignore the shocking evidence the government produced that shows General Flynn was honest with the agents who interviewed him, and the FBI and DOJ had no reason to investigate him, and she had no basis to run to the White House to get him fired.” “Obviously,” Powell added, “Yates has not even read the government’s motion to dismiss.”

Or if Yates did read it, she didn’t care. She clearly intended to slam Flynn and Barr, and this gave away her partisan game because, when asked whether she agreed with Rod Rosenstein’s memorandum recommending FBI Director James Comey be dismissed, Yates stated, “I’m not going to weigh in on what a successor of mine, a decision he made.” When pushed, she said demurred again, saying she did not think it was appropriate to weigh in on whether the memo was accurate or not.

Yet Yates had no problem weighing in on a successor attorney general’s decision to dismiss the charge against Flynn—even though she did not know the facts underlying the decision. (Yates also did not know the substance of Flynn’s conversation with the Russian ambassador, claiming on multiple occasions Flynn had discussed sanctions. He had not.) Rather, all she knew was her “impression” of the FBI’s purpose for questioning Flynn. But as the FISA fraud showed, Yates’ impression of the FBI’s handling of Crossfire Hurricane is far removed from reality. 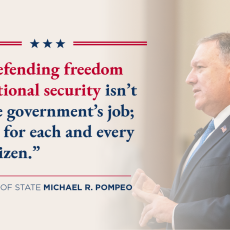 URGENT: Stunning data from South Africa suggest Omicron may be the end of Covid (and of Covid vaccines)