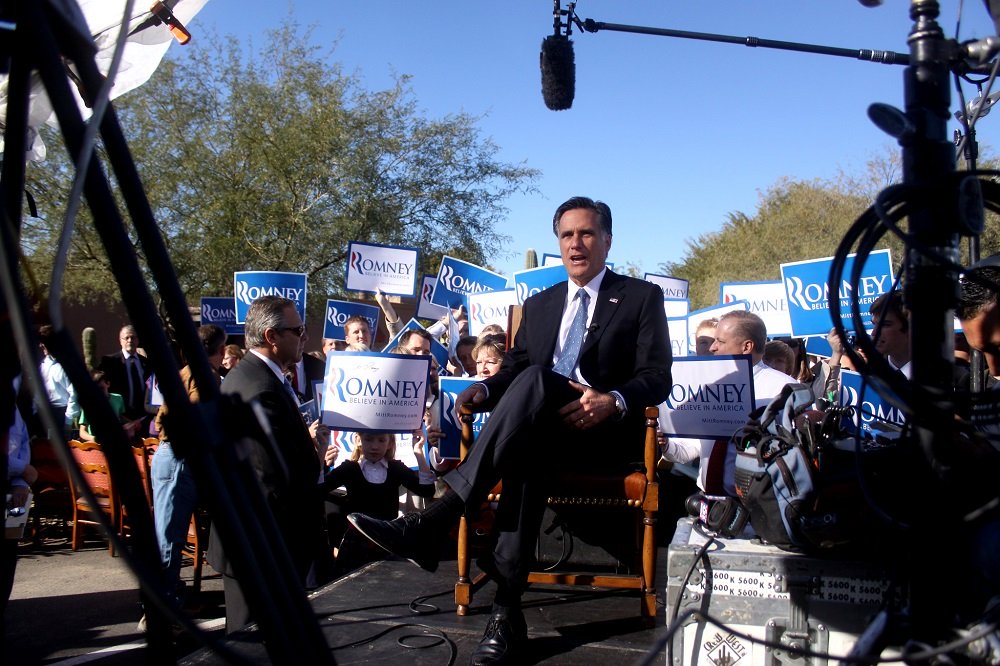 William Hagerty IV is a millionaire businessman running in the Republican primary for Tennessee senator. He made his money in private equity, where decades ago he began his lifelong friendship with Mitt Romney.

Hagerty was an early supporter of Jeb Bush, for whom he was chosen as a national delegate, before switching to Team Marco Rubio after Jeb left the race. He was late to Team Donald Trump, using his role there to position himself for future success.

He has the endorsement of the big-business Chamber of Commerce and the opposition of conservatives like Sens. Rand Paul and Ted Cruz, Mark Levin, and former Sen. Jim DeMint. And he already pledged to vote alongside GOP leadership, whose allies are assisting his campaign.

None of this seems much out of order for an American businessman running for Republican senator in, say, 2012 or 2016, but Hagerty is running as a disruptive populist candidate in a tight 2020 primary, buoyed above his decidedly establishment career by campaign cash (he has donated $2.5 million to himself) and the coveted endorsement of President Donald Trump, although familiar sources attribute this directly to the sizable influence Hagerty’s friend Jared Kushner.

William Hagerty met now-Sen. Romney “when the two were young consultants based in Boston,” The Tennessean reported in 2012. The two appear to have remained close, with the same article crediting Hagerty with pushing his friend to run for president as early as 2006.

In 2012, Hagerty served as the director of the Romney transition team’s presidential appointments and he, along with his wife Chrissy, donated more than $125,000 over Romney’s two national campaigns. “Bill Hagerty will not just be casting a ballot for his party’s nominee for president this week,” the August 2012 Tennessean article reported. “He’ll be helping out a friend.”

Earlier this week, the widow of Tennessee’s Fred Thompson came out in opposition to Hagerty’s nomination, citing his repeated home-turf attacks on her husband’s presidential campaign in 2007. “Hagerty turned his back on my husband Fred Thompson in 2007 by endorsing Mitt Romney,” Jeni Thompson said in her first tweet since 2012 and first endorsement since her husband’s death five years ago. Now-Sen. Mitt Romney remembers this loyalty, saying he would “love it” if his old friend entered the race.

Rubio’s campaign was struggling because Donald Trump had won nearly every contest so far, Rubio had won nothing, and the race was already largely about who would defeat The Donald. Just 15 days after his contribution, Rubio followed Jeb out of the race.

Finally — just more than four months after his donation to Rubio, and after the primaries were completely over — Hagerty joined the victorious Trump campaign and was named a state finance chair. In August 2016 he joined the transition team, reprising the presidential appointments role he had served for Romney. In this position, The Federalist has learned, Hagerty befriended Jared Kushner, lobbied for the ambassadorship to Japan (which he received), and was instrumental in assembling Trump’s first cabinet.

His friendship with Kushner is rumored to be what spared him. When transition head Chris Christie and his allies were axed, Hagerty remained in place to play the top role in organizing the president’s appointments. In that role, he saw his old friend Romney interviewed for secretary of State before losing the job to now-fellow Trump critic Rex Tillerson.

Hagerty’s friendship with Kushner was also instrumental in winning the president’s crucial endorsement, The Federalist has learned.

Supporting Romney’s 2012 run, of course, was the norm among Republicans. (Even Trump supported Romney that year.) Indeed, a number of the jobs and positions Hagerty has held over the years line up with what you might expect of any up-and-coming Republican player, and Hagerty is popular among them.

A number of months ago, outgoing Tennessee Sen. Lamar Smith shepherded him around the Senate Republican lunch, introducing him to attendees. As Hagerty turned to leave, he assured the room “I’m on the team.” Upon returning to his office, one senator reportedly asked his staff, “Who was that guy?”

“I’m on the team” is a message Republican leadership, including Senate Majority Leader Mitch McConnell, likes to hear. McConnell was an early endorser of Hagerty, and has been joined by the Chamber of Commerce, a pro-corporate organization generally aligned against the base and sometimes against the president. Conservative base favorites like Sens. Rand Paul and Ted Cruz, radio host Mark Levin, and former Sen. Jim DeMint, however, have endorsed Hagerty’s opponent, Dr. Manny Sethi.

The vote is currently closely split, with Hagerty barely leading Sethi — practical political malpractice considering the endorsement of the president, who is immensely popular with Tennessee’s Republican primary voters. As next week’s primary day approaches, both sides have stepped up attack ads.

The pro-Hagerty ad also accuses him of applying “for a job in the Obama White House,” referencing a non-partisan White House fellowship, neglecting that the reason this might be known to Hagerty was his position on the President’s Commission on White House Fellowships that approved the fellowship applications to the Obama White House. Hagerty was appointed to this position by President Bill Clinton, and was kept on through the George W. Bush, Obama, and Trump administrations.

“When I was in Tennessee last week and saw Trump signs, I saw them in yards that also had signs for GOP Senate candidate Manny Sethi, even though Donald Trump endorsed his primary opponent Hagerty,” The Federalist’s Mollie Hemingway tweeted Monday. “Not entirely surprising since Sens. Cruz and Paul have endorsed Dr. Manny Sethi.”

And not entirely surprising given William Hagerty IV’s long, well-documented history as a mainstream, liberal Republican. The vote is Aug. 6, and the winner is very likely going to the U.S. Senate. It’s up to the voters now to see who is who, and send the right man.

James Clapper is a garbage human…