A very interesting release by ODNI John Ratcliffe [LINK] highlights a June 25, 2020 response from the FISA court to the DOJ.  There are five issues queried by the DOJ seeking guidance from the FISC.  Each issue points to a specific path being taken by the DOJ in general… and the John Durham probe specifically.

Today, the ODNI, in consultation with the Department of Justice, releases a June 25, 2020, opinion by the Foreign Intelligence Surveillance Court (FISC) evaluating and approving limited circumstances under which the Government may temporarily retain, use, or disclose information that was unlawfully acquired pursuant to a FISC order. (more)

Important note:  We are looking at this in hindsight.  The response from the FISC was dated June 25, 2020, so the request for opinion from the court was before June 25th.

The court opinion tells us for the first time, the DOJ is admitting/stating that ALL FOUR of the Carter Page FISA applications were corrupt upon origination.   This is a big deal. In previous filing with the court (January 2020) DOJ only refuted the predication for the second and third renewal.

Within the FISC reply we see the DOJ stating all four submissions contained material omissions and violations of “the duty of candor” (ie. lying)  by the FBI investigative unit and the DOJ team that assembled the application(s). 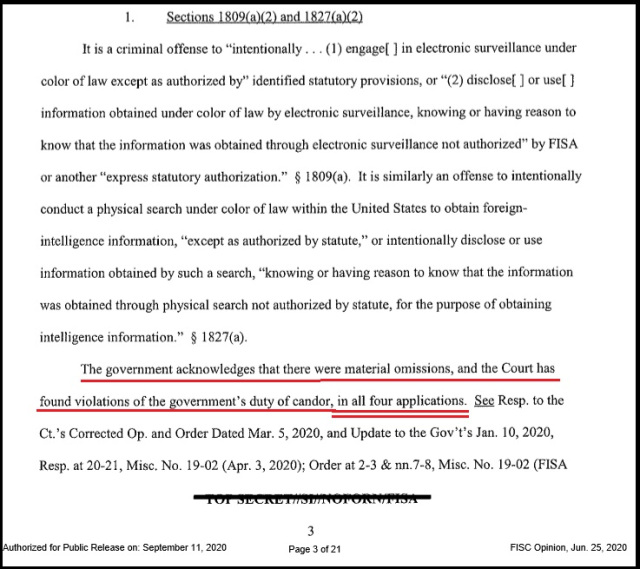 As we look closely at the response we see some very specific language that tells a story.

Apparently the DOJ asked the FISA court for guidance on five very specific issues centering around the Carter Page FISA application.  The DOJ is asking for legal guidance to assist them in disclosing information in the FISA file & evidence attached to the FISA file.

The five issues all circle around the FBI/DOJ use of the Carter Page FISA application; and, more importantly, the underlying evidence that is attached to the FISA application.  The five topics are very interesting: 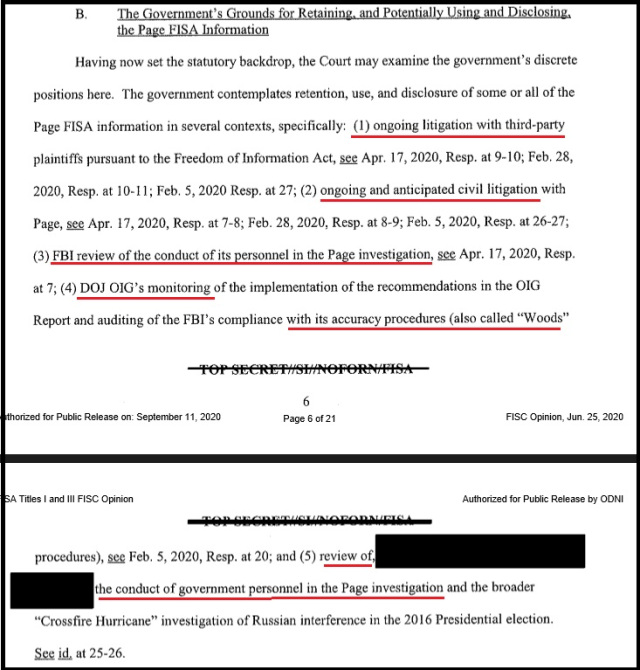 The opinion from the FISC is only 20 pages long [direct pdf here], and if you skip the citations it’s a pretty straight forward answer from Judge Boasberg to review.  I would strongly urge everyone to take a few minutes and read it… carefully…. to see what John Durham was asking.

Pages #6 and #7 talk specifically about the different requirements for retention and distribution and outlines a cautious approach toward distribution.  One of the disconcerting parts of this segment seems to be the FISA court subtly guiding the DOJ away from using non-minimized raw FISA material in prosecution of intentional malfeasance.   On this issue the court says allowing a target to escape prosecution is part of the penalty upon the DOJ for wrongful assembly.

The court does not consider the DOJ is targeting the “assemblers” for their criminal conduct.  Rather the response is general toward criminals who were targets of a FISA application assembled with corrupt intent. A little weird.

Pages #11 and #12 hit the topic of FOIA production.  The court says “some” FOIA requests might warrant document distribution, but not all.   However, on the topic of Carter Page getting his FOIA fulfilled, the court supports expansive distribution to Mr. Page.

I find the arguments and issues in/around page #14 to be especially noteworthy.  In this segment the court is responding to the underlying raw evidence that would normally be used to assemble a “woods file”.  The court notes the FBI Sentinel system would contain the minimized outcomes (redacted evidence) and this points to a bigger issue.  READ: 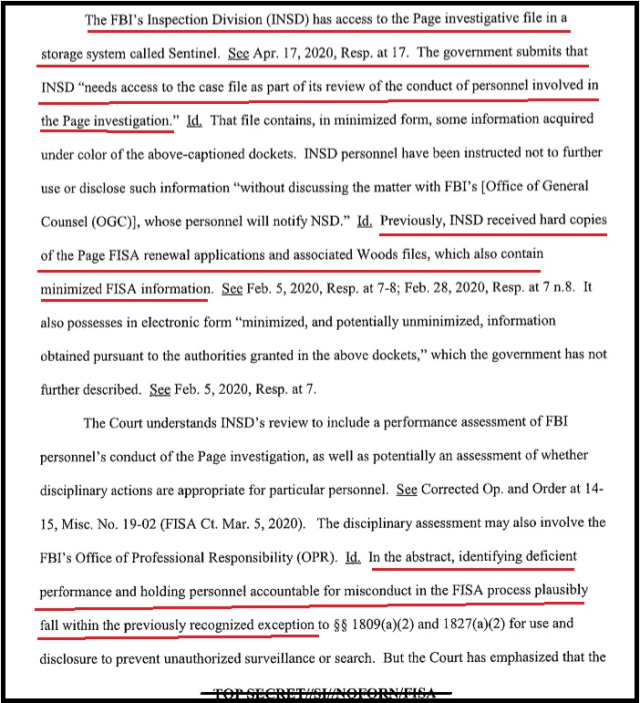 Regardless of motive or investigative suspicion, someone wants to compare the raw intel to the intel that made it into the FBI/DOJ Sentinel system.

In response to this inquiry Judge Boasberg notes FBI investigators would have access to the minimized information within the Sentinel system; however, insofar as there was additional inquiry into the raw and non-minimized intelligence, a review and distribution would be permissible so long as there was a strong filter team in place to ensure statutes surrounding FISA security were not violated.

Overall, Boasberg gives permission and approval for all six aspects requested.  However, he does so with several legal qualifiers and distinctions which the DOJ must observe.

Here’s the full reply and opinion.  Strongly suggest the time to review:

♦Lastly, a small and likely insignificant issue…  Here’s another one of those weird redactions that seems very out of place.  It means there is something else we have yet to identify.    Why redact the date the copy of the FISC opinion was produced by the FISA court?

At face-value there is no purpose in this redaction. 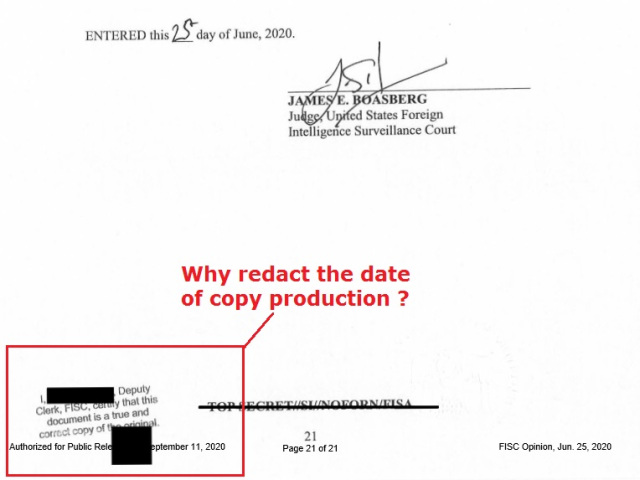 Isn’t it ¹Deputy FISA Clerk  “Lynn Hall”?  And why redact the date of the copy?

[¹maybe the FISC has identified an internal leaker] 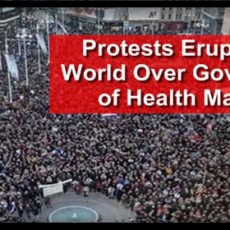