[Transcript] – THE PRESIDENT: Well, thank you very much. And that was some greeting we had in North Carolina. I’ll tell you, I don’t know if you saw the crowd outside, but it’s pretty amazing. But we’ve had it in Texas, in Ohio, South Carolina, Florida. It’s just incredible what’s happening. Please, sit down. Please.

And I’m honored to be in North Carolina, in the presence of true American heroes, as we commemorate the 75th anniversary of the American victory in World War Two. And a victory it was. 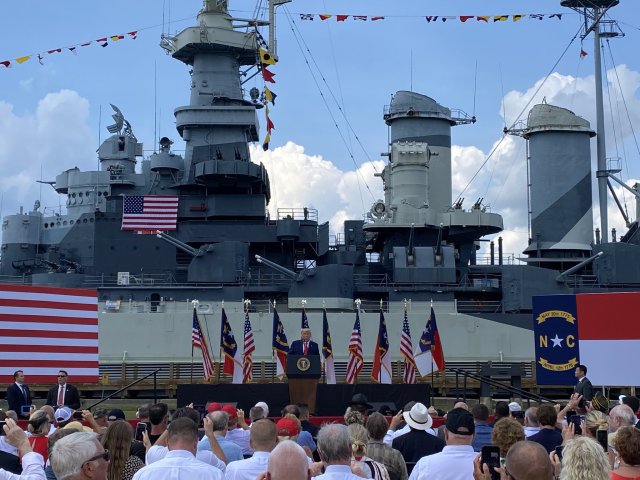 On September 2nd, 1945, the great General Douglas MacArthur accepted Japan’s unconditional surrender aboard the USS Missouri in Tokyo Bay. V-J Day marked the end of the deadliest conflict in human history and the ultimate triumph of American freedom. That was a big day. That was a great triumph of great country. And our country is greater than ever before. That’s what’s happening, and that’s what it is. Greater — with a greater military — (applause) — with a greater military than we’ve ever had before.

We are deeply moved to be joined this afternoon by World War Two veterans, all of whom I met, all of whom are tough — I don’t want to mess around with any of them, I’ll tell you right now — whose blood, sweat, grit, courage, and unfailing devotion made that epic victory possible.

These brave Americans raced into the fires of hell to vanquish tyranny, dethrone fascism, and defend the American way of life. You’ve earned the eternal and undying gratitude of all Americans, and that’s why I’m here today. I wanted to be with you. You know what I’m talking about, don’t you? And we had a good time, a little while ago — right? — over at the Oval Office. Congressional Medal of Honor.

We’re privileged to be joined as well by veterans from every generation, including a number of wounded warriors. We stand in awe of your service. I can say that: so respected, so loved. We are in awe.

Joining us for this commemoration are Secretary David Bernhardt. Secretary? Where is David? Thank you, David, very much for being here. (Applause.)

A great senator, a real friend of mine — a tremendous senator, actually, and he works very, very hard and he loves the people of North Carolina — Senator Thom Tillis. Thom, thank you very much. (Applause.)

There is no better place to mark this profound World War Two anniversary than right here in Wilmington, North Carolina. The people of this city and this state — and it’s an incredible state, and I want to thank you for being so nice to me. You’ve been very nice — very, very nice — every time we’ve asked for something. But I’ve been nice to you also; I have to say that.

Nearly 2 million American servicemen trained for combat in North Carolina, more than any other state. Wow, that’s pretty good, isn’t it? Huh? Who would know that? (Applause.) Two million trained; more than any state.

Over 360,000 service members from your state fought in the Second World War. They battled on the cliffs of Normandy, over the skies of Africa, and in the deep waters of the Pacific. Over 11,000 North Carolina patriots fought the enemy until their very last breath. You know what that means, right? Think of that: Eleven thousand died in the war. We want to thank you. Boy. And we have family members here, by the way. That’s them saying hello. (Laughter.)

In Wilmington, more than 20,000 workers of the North Carolina Shipbuilding Company poured out every ounce of their strength to build an astonishing 243 ships for the U.S. Navy. And it was the citizens of Wilmington who came together to save a priceless artifact of American history: the glorious battleship behind me, the USS North Carolina. And that is some powerful and beautiful ship.

During World War Two, this magnificent ship participated in many major naval offensives and — in the Pacific theater itself, including the Marshall Islands, Iwo Jima, and Okinawa, earning more battle stars than any other battleship. We’re learning a lot today, right? That’s pretty good.

Why are you clapping? You come from West Virginia. Huh? He loves West Virginia; so do I. Right? But we’re clapping anyway. Right? (Laughs.) You better believe it. Thank you.

After the war, the people of Wilmington organized a massive campaign to save this beautiful ship from the scrapyard. They preserved it as a memorial to the gallant deeds of American sailors, a monument to the American workers that built it, and an enduring symbol of American greatness. Now more than 200,000 people visit this site each year to learn the history and the heroism that defines our nation.

This afternoon, my administration is formally recognizing the city’s exceptional contributions to victory in the Second World War.

And God is saluting you up there, I tell you. We may have to go a little quicker than I thought, right?

With this designation, we proudly declare that, in America, we don’t tear down the past, we celebrate our heroes, we cherish our heritage, we preserve our history, and we build a future.

This mighty vessel in this magnificent town will forever tell that story with this designation. So I want to just congratulate North Carolina and Wilmington. That’s a fantastic — a fantastic thing. (Applause.)

I want to thank Senator Tillis and Congressman Rouzer. Stand up, please — (applause) — in between the lightning bolts — for their work to make this day possible. Thank you, Thom. Thank you, fellas. Great job.

And let me also thank retired Navy Captain Wilbur Jones, who has championed the cause of World War Two Heritage Cities. (Applause.) Wilbur, thank you. Thank you, Wilbur. Great job. Great job. So, Wilbur, you know a lot of people wanted this, right? So you are just a tough cookie. You got it. Number one. Number one in the nation. I want to thank Wilbur. That’s great.

I also want to recognize several of the heroes who saved American freedom. And I’ve known some of them since I’ve been in office; I’ve seen them, and there they are. Here today is my good friend, who I just left, and he was in the Oval Office with me at the White House, Woody Williams. Seventy-five years ago, Woody showed fearless courage as a Marine in the Battle of Iwo Jima. You are amazing. (Applause.)

He braved a torrent of hostile fire while destroying one enemy machine gun position after another; knocked them out, one after one. For his daring actions, President Truman — think of that — awarded Woody the Congressional Medal of Honor, the highest in our land. Woody, congratulations. You inspire us all. It was great to have you on Air Force One. (Applause.)

Also joining us today is Paul Phillips, a veteran of World War Two, Korea, and Vietnam. During the Second World War, Paul proudly served on the USS North Carolina in the Pacific theater. At 93 years old, he has returned today to visit the ship upon which he so nobly served. He’s a tremendous man. Paul, it’s our honor to have you with us. Please, Paul, stand up. Thank you, Paul. Thank you. (Applause.) Perfect. Thank you, Paul. Great job, Paul. I appreciate it.

Here as well is Army veteran, Greg Melikian. When Greg was 20 years old, he served as a radio operator in the headquarters of Supreme Allied Commander General Dwight D. Eisenhower. Oh, I’d loved to have heard some of those conversations. Much more interesting than today, right?

Our task today is to pass on to the next generation the blessings of liberty that you fought for and that you bled for — all for security. You wanted to secure our future, you wanted to praise and raise our flag, and you did that. You raise our flag, and you stand proud and you stand tall, and we’re doing it in our nation too — almost everyone. Every once in a while, you see somebody not do it. We don’t like it when they don’t do it, do we? We don’t like it. I want to just thank you. A fantastic job.

American warriors did not defeat fascism and oppression overseas only to watch our freedoms be trampled by violent mobs here at home. We stopped those violent mobs very easily. All they have to do is say, “Please, come in, Mr. President.” We’ll have it done in one hour. (Applause.) “Please, come in.”

It’s one of the great — to me, just incredible that they don’t immediately. They just — as you know, Portland, the mayor last night, he was raided — his home was raided. He was thrown out of his home. And then he’ll stand up and he’ll fight for these people. These people only know one thing, and that’s strength. That’s all they know. Strength. And we have strength.

For the sake of all Americans, we must uphold the rule of law and defend the American Dream for every child in our land. We must teach our children that America is a land of heroes like you, you’re heroes. You know that, right, Woody? You’re heroes. You’re great, great men. (Applause.) Great men. Better believe it.

We’re not ashamed in America. We’re not ashamed of anything. I signed a very important edict recently. Three months ago, they were ripping down statues. I said, “You can rip them down, but you’re going to serve 10 years in jail, if you do.” And as soon as I did that, incredibly, you haven’t heard about statues coming down, have you? Statues or monuments. (Applause.)

Together, we will remember America’s towering victories, we will recognize America’s outstanding virtues, and we will pay tribute to the heroes who keep us safe, strong, proud, and free. And I also, in addition to our wonderful, brilliant military, I want to thank law enforcement, because the law enforcement — (applause) — without them, we’re not here today very well. They’ve done an incredible job. Really, an incredible job.

And thank you again to the World War Two veterans in attendance today. This is such a great tribute to North Carolina. We will never forget what you did for us. Your legacy is etched forever into the heart and soul of a grateful nation. And this spot is right now one of the most important military spots anywhere in the world. Congratulations to everybody, and thank you for making it come true. (Applause.) 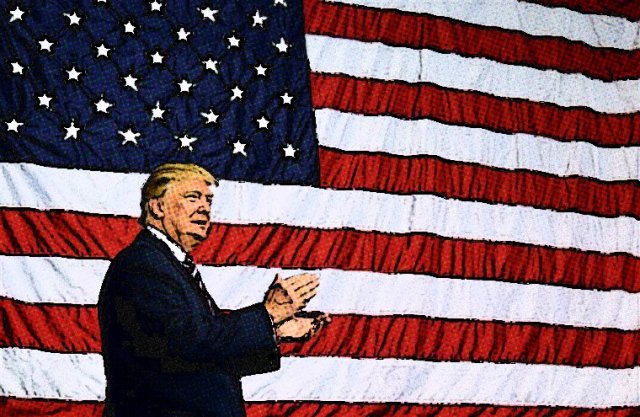 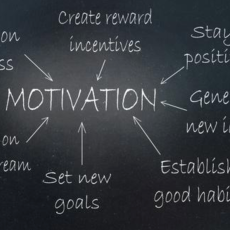 Must-Have Qualities of a Successful Entrepreneur! 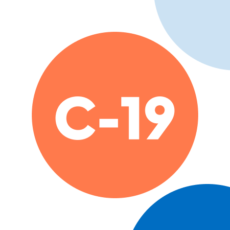