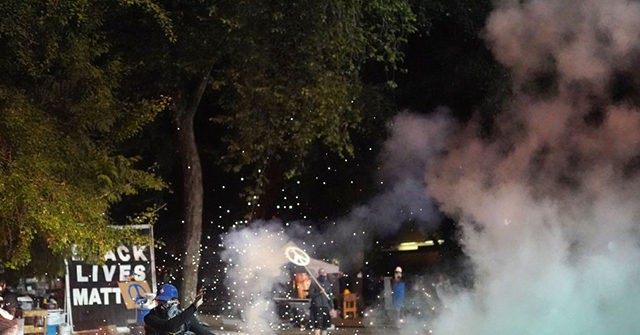 Just one day after Democrats at a Senate hearing on destructive riots in Portland denied that description and claimed otherwise peaceful protests turned violent because of the presence of federal officers, the state police declared a riot, which included gunfire, a stabbing, and setting the Portland Police Association building on fire.

To those attempting to break into and/or damage the Portland Police Association building: Stop now or you may be cited, arrested, or subject to use of force.

A riot has been declared at N Lombard St and N Campbell Ave. You are ordered to disperse to the south immediately.

Protests following the death of George Floyd, a black man who died at the hands of Minneapolis police in May, have devolved into dangerous riots in cities across the country.

The local media outlet KOIN reported on the scene on Tuesday night:

As the protests spilled into Wednesday morning, several shots rang out near North Mobile Avenue and then again about 15 minutes later near North Lombard Street. No one was hurt, but a car was struck. When Portland police went to investigate, the crowd that met them was hostile and no one would speak to officers about the incident.

A short time later, a group of protesters breached the doors of the Portland Police Association building. While inside, some set a fire and caused other damage — prompting the police to declare a riot around 1 a.m.

Upon reaching their destination Tuesday night, some in the crowd proceeded to drag a dumpster into the street and light it on fire. Others set debris on fire and pushed it against the PPA building, only for some to dismantle the pile and extinguish the flames. Portland police did not engage the crowd but tweeted that there was “criminal activity” occurring in the area and asked peaceful protesters to leave.

National Review reported on a stabbing on Monday night:

A woman had walked into Lownsdale Square park in downtown Portland and was taking photos or recording video just before 6:30 p.m. when an argument began between the woman and other people in the park.  The woman who had been taking photos then brandished a knife and stabbed another woman in the chest.

Officers were met with a “hostile crowd” on the scene and were forced to bring in reinforcements to the area. As police were trying to secure the crime scene, someone picked up the knife used in the stabbing and ran off with it, Portland police said.

As Breitbart News reported, the Department of Homeland Security (DHS) declared it would not back down from its responsibility to protect federal property in the United States until state and local police were successful in aiding the federal officers already stationed at the courthouse.

Federal officers provide protection for 9,000 federal buildings across the country. 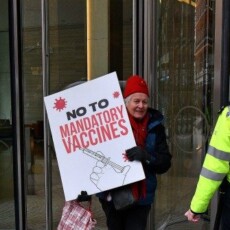 UK Minister: You Might Be Banned from Venues Without Vaccine Passport 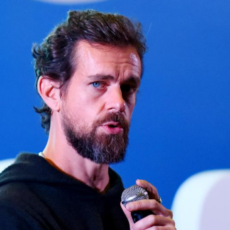