On the run from the Portland police, Marquise ‘Keese’ Love posted on Snapchat attempting to justify his actions and asking people to send him money. Earlier in the day, Love had been identified as the man seen kicking truck driver Adam Haner in the head in a viral video from the ongoing riots in Portland, Oregon.

The post read: “Might go to jail for murder tonight for a racist when all I did was fight him look it up on twitter put money on my books and come see me.”

The night of the attack, Love locked his Facebook account after it was leaked on 4chan by someone who recognized him from the video of the brutal assault.

Haner was in his truck when he observed Black Lives Matter rioters attacking and robbing a trans-woman. He attempted to intervene, and his vehicle was immediately attacked by the rioters. They began beating on his truck, kicking it, and threatening him.

Haner realized that the situation was escalating, and attempted to drive off, with rioters still attacking his truck and chasing after him. He panicked and tried to run a red light, and instead crashed his truck.

Rioters began throwing objects at the truck, and pulled him out of the vehicle. A large mob then attacked Haner, kicking him in the head while others restrained him. Love seemed to be leading the mob, and can be seen throughout the video joining in the assault.

Haner was unconscious at the end of the video and was transported to the hospital in serious condition.

Marquise Love, 25, has been arrested seven times in Washington County, Oregon since 2012.

In 2012, Love was arrested twice: once for second-degree theft, and again for criminal trespass and interfering with public transportation.

In 2014, a Washington County court established Love’s paternity of a child in a domestic relations case.

In 2015, he was arrested again for interfering with public transportation.

He was arrested twice in 2016 for providing false information in connection with the transfer of a firearm, and domestic assault and criminal trespass.

In 2017, Love was arrested for domestic assault and domestic harassment.

He still owes thousands in unpaid fines from various convictions.

Marquise Love turned himself in and was booked in the Multnomah County Detention Center on Friday morning. He was charged with three felonies: assault, coercion, and rioting. Love’s parents reportedly worked with the cops to convince Love to turn himself in. 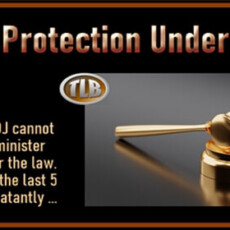 Unequal Protection Under the Law

“It’s Poor People and Young People Who Are Paying the Cost of the Lockdown,” Says Stanford Professor