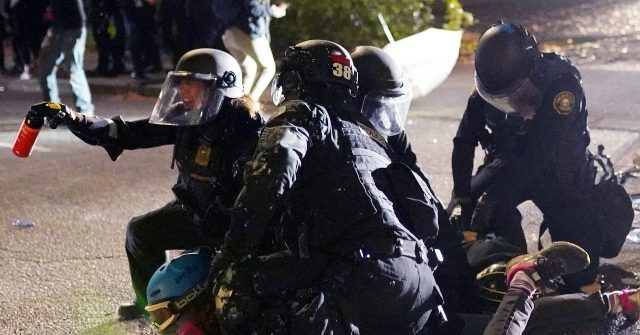 “Despite the public address announcements, the crowd continued to block traffic on East Burnside Street and several continued to trespass on the Kelly Building property,” the Portland Police Bureau (PPB) said in a news release Saturday.

The release detailed the events:

At 10:05 p.m., certain members of the group began taking concrete pieces off of a retaining wall nearby the Kelly Building. These people then smashed the concrete on the ground into smaller pieces which were thrown at officers. Certain people in the crowd shined lasers at officers, which can cause permanent eye damage. Several public address announcements were made regarding this criminal behavior, however it continued for a couple more hours.

As the crowd continued to refuse to disperse from the area of the Kelly Building, targeted arrests were made. A person who was taken into custody was arrested wearing ballistic body armor (photo). Around 12 a.m., a vehicle was stopped and an occupant was arrested for shining a laser at the PPB’s air unit.

On its Twitter page, the bureau said people in the crowd were “trying to blind officers” with the lasers:

Officers are having rocks and chunks of concrete thrown at them. Individuals in the crowd are shining lasers trying to blind officers. The sound truck is issuing warnings and directions to those participating in the unlawful assembly to disperse. (continued)

At 12:10 a.m., individuals in the crowd gathered outside of the Kelly Building began throwing or launching frozen or hardboiled eggs, rocks, and commercial grade fireworks at officers positioned in the parking lot. This ongoing criminal activity created an extremely dangerous situation.

Public address announcements were continually made directing the group to disperse to the east. At 1 a.m., both Oregon State Police and PPB officers began dispersing the crowd to the east.

However, as police dispersed the crowd they continued launching rocks, bottles, and explosives at them.

“Because of the danger posed by these projectiles, officers used crowd control munitions as they moved the group,” the release said. 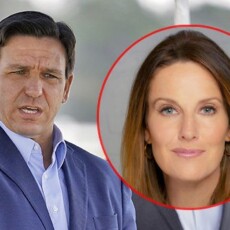