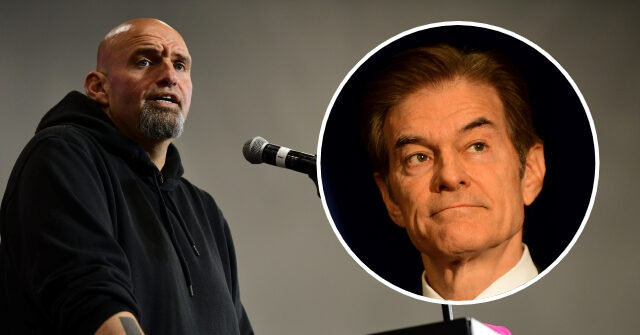 Mehmet Oz, the Trump-endorsed Republican nominee for U.S. Senate in Pennsylvania, is in a statistical tie with Democrat John Fetterman, the state’s lieutenant governor, according to a poll.

Oz earned the support of 42 percent of likely Pennsylvania voters in the most recent Insider Advantage poll. On the other hand, Fetterman finished just above Oz, coming in at 45 percent.

However, the race is in a statistical deadlock because Fetterman’s narrow advantage is within the poll’s ±4.2 percent margin of error.

Oz’s stride in the polls is significant because he was previously down by as much as 11 points in earlier polls.

Insider Advantage’s survey of 550 likely voters from September 23 to September 24 also found that eight percent of Pennsylvanians remain undecided with less than two months to go until the November midterms.

Mehmet Oz, the celebrity doctor and Republican Senate candidate in Pennsylvania, rushed into the crowd to help a woman who collapsed during his campaign rally in Bucks County on Saturday. https://t.co/qeSDWc6jbA

These latest poll numbers came just days after Fetterman’s campaign sounded the alarm after being out-fundraised and outspent by Oz and other pro-Oz super PACs.

Fetterman campaign manager Brendan McPhillips recently issued a “wake-up call” in an internal memo that warned Republicans are “significantly outspending us and out-communicating on the airwaves.”

Fetterman’s internal polling looks similar to Insider Advantage’s recent poll, as McPhillips warned in his memo that Fetterman is “neck and neck with Oz.”

“Senior voters and women favor Fetterman by more than ten points, while men and voters under the age of 65 more likely to vote for Oz. Voters who describe themselves as independent split evenly between the two major candidates,” Towery said. “The percent of undecided voters remains relatively high, and the percent of undecided independent voters is usually high at 22 percent.”

Fetterman, who has struggled with speech issues since having a stroke in May, finally agreed to debate Oz next month on October 25, two weeks from the midterm elections and more than one month after Pennsylvanias begin early voting.

Jordan Dixon-Hamilton is a reporter for Breitbart News. Write to him at jdixonhamilton@breitbart.com or follow him on Twitter.