Politicians care about their hair… a lot.

House Speaker Nancy Pelosi’s illegal salon visit Monday struck a nerve with a prominent proportion of the population this week after the Democratic leader was caught seeking a blow-out at a shut-down establishment without wearing a mask, which is mandated in San Francisco.

Fox News broke the story Tuesday night, publishing security cam footage showing Pelosi in the salon with wet hair without a face covering while everyone else can be seen complying with the city’s indoor mask mandate.

“It was a slap in the face that she went in, you know, that she feels that she can just go and get her stuff done while no one else can go in, and I can’t work,” salon owner Erica Kious told Fox News, adding she “can’t believe” the Democratic leader flouted the city’s laws on masks.

“We’re supposed to look up to this woman, right?” Kious said. “It is just disturbing.”

Soon after, Pelosi’s office released a statement confirming the story, arguing Pelosi did nothing wrong.

Pelosi later addressed the controversy on Wednesday, calling the hair appointment she requested from the closed hair salon a “setup” and demanding an apology from the owner for allowing the 80-year-old speaker to proceed with the special treatment.

Kious, however, went on “Tucker Carlson Tonight” Wednesday to set the record straight, calling it “hurtful” that Pelosi would accuse the salon of orchestrating a setup for reluctantly moving forward with an appointment Pelosi herself requested.

“There was no way I could’ve set that up,” Kious said. “I’ve had a camera system in there for five years. I mean, I didn’t go in there and turn cameras on as soon as she walked in and set her up. So that is absolutely false.”

By Thursday, Pelosi’s hair appointment had made headlines across every major media outlet (except MSNBC) and became the biggest story on Facebook, where at least 13 of the 25 top-performing link posts at one point were related to the hair scandal. It’s not hard to see why.

As small enterprises such as Kious’s hair salon struggle under coronavirus lockdowns implemented by Democrats, more than 100,000 of which permanently went under by mid-May, the very politicians demanding them have been exposed violating their own rules. Kious herself said after six months of being closed down, her business is “pretty much done,” and she is now considering a move from the city.

Pelosi in April, however, called it “really unfortunate” that people were pushing back against coronavirus restrictions wrecking their lives.

Pelosi’s hair appointment now goes down among infamous hair scandals in political history, the most recent and similar of which happened just four months ago in Chicago.

When the coronavirus pandemic began raging in early April, Chicago’s Democratic Mayor Lori Lightfoot reopened a hair salon that was closed under the state governor’s lockdown order to receive special service because she’s important, even after admonishing residents who were complaining about the stay-home orders.

“Getting your roots done is not essential,” Lightfoot had said in a previous public service announcement. Except for her, it is.

“I’m the public face of this city,” Lightfoot said when challenged on her own hypocrisy. “I’m on national media, and I’m out in the public eye.”

In 1993, then-President Bill Clinton shut down two of Los Angeles’ four runways to make time for his personal Beverly Hills hair-stylist to climb aboard Air Force One. While initial reporting on “hairgate” charged Clinton with causing considerable flight delays, federal records later obtained by New York Newsday showed the president’s actions were the cause of no significant flight delays of regularly scheduled flights, only major inconveniences for airport staff.

“If you close two runways, you take away 50% of the capacity and increase the complexity by 100%,” union official Karl Grundmann told the Los Angeles Times.

Clinton also held back an unscheduled air taxi flight for an hour, according to Newsday reporting on Federal Aviation Records.

The cost of John Edwards’ campaign hair cuts became public at an inopportune time for the former North Carolina senator when he was seeking the Democratic presidential nomination against then-Sens. Hillary Clinton of New York and Barack Obama of Illinois in 2007.

Edwards, who made a 21st-century war on poverty his central campaign theme, was found to be doling out upwards of $1,250 to fly out his personal hair-dresser to meet him on the trail for a quick clip.

“He has nice hair,” Joseph Torrenueva, Edwards’ preferred Beverly Hills stylist, reportedly told the Washington Post. “I try to make the man handsome, strong, more mature, and these are the things, as an expert, that’s what we do.”

Campaign finance records show former Arizona Sen. John McCain’s campaign shelled out more than $165,000 in two months to doll up their vice presidential running mate, former Alaska Gov. Sarah Palin, over the short course of the election. Palin’s hair stylist alone brought in $42,615 in just about two months, or about $750 a day, according to the New York Times.

Palin might not have been aware of how much the campaign was spending on her wardrobe, but someone on the campaign certainly did.

Former French President Kept Barber on Call for $11,000 a Month

In 2016, the Wall Street Journal reported that French President François Hollande kept a personal barber on-call under a five-year contract coming out to more than half-a-million euros, or nearly $11,000 a month, throughout his term. The revelation sparked controversy in France, undermining the president’s common-man brand. 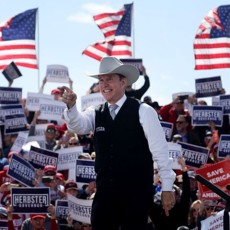