There was also gunfire and violence against police officers. As of this writing, downtown Chicago is all but closed to those trying to get to work on a Monday morning.

There are hundreds and hundreds of people downtown right now. #Chicago #ChicagoScanner pic.twitter.com/03CziG6vHo

The details reveal just how organized this was….

The looting and rioting started just after midnight and lasted “nearly five hours.”  Get this…

“People darted through broken store windows and doors along Michigan Avenue carrying shopping bags full of merchandise,” the Tribune reports, adding, “Cars dropped off more people as the crowd grew. At least one U-Haul van was seen pulling up.”

People being dropped off like it was just another morning at Looting School. 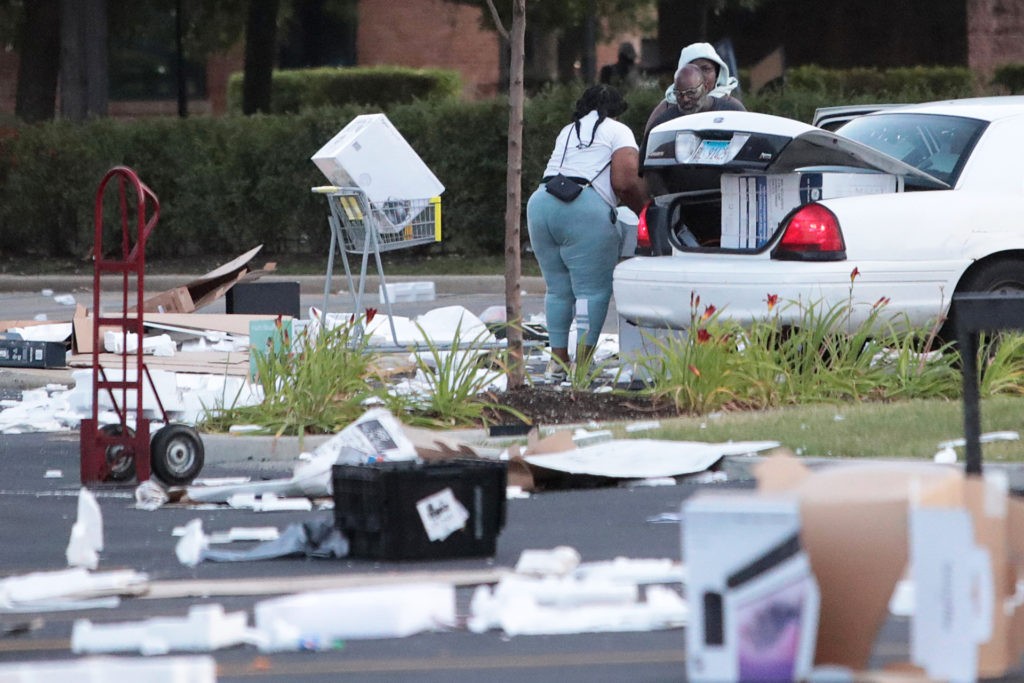 People load merchandise into a car near a looted Best Buy store after parts of the city had widespread looting and vandalism, on August 10, 2020 in Chicago, Illinois. Police made several arrests during the night of unrest and recovered at least one firearm. (Scott Olson/Getty Images)

Hundreds of them. All at once.

This was not spontaneous.

What we appear to have in Chicago is one more act of organized, left-wing terrorism, similar to what we are seeing in other Democrat-run cities, most especially Portland.

ABC7 has videos of the looting and video of the sound of gunfire, as well as video of a foursome of looters dragging an ATM down Lake Street right, near the legendary Chicago Theater.

According to a police spokesman, “someone fired shots at responding officers and police returned fire.”

A Chicago police officer was being attended to by other officers at Grand and Wabash Aves. pic.twitter.com/U5MOGZo4ij

Both videos feature looters yelling things like “fuck the police.” According to the Tribune  “in at least two spots graffiti against the police was seen.”

So there appears to be a political motivation behind this.

Looters broke into a Chicago mall and are looting the place clean tonight. #BlackLivesMatter pic.twitter.com/wKJZbcvpoZ

To get a sense of just how bad things are, the Tribune further reports “People were seen running out of a PNC Bank, its windows smashed.” On top of that a Sally Beauty Supply was “cleaned out,” “Crowds repeatedly tried to bash in the windows of the Omega watch store,” and a “group of people went in and out through a broken window of the Louis Vuitton store.”

Hitting Chicago’s Magnificent Mile is no accident. It is the jewel of Downtown Chicago, one of the most famous shopping districts in the world. If retailers lose faith the police can protect them from criminal marauders and flee the area, it will serve as more than just a symbolic victory for the left-wing terrorists in Antifa and Black Lives Matter.

High-end retailers are getting looted and vandalized downtown early this morning. Hundreds of people ha e made their way to the downtown area. Chicago police on this video chase someone on North Michigan Avenue. pic.twitter.com/xkNHvss1qY

As of this writing, the after-effects of the night’s terrorism are now hitting law-abiding Chicagoans who are just trying to make it to work during the Monday morning rush hour. Train and bus service into downtown has been shut off. Both bridges that cross the Chicago River are raised. State police have blocked freeway exits into downtown.

As someone who is pretty familiar with Chicago (it’s my favorite city), and who has driven many times through the Windy City’s normal rush hour traffic, the chaos occurring right now, the godawful mess working people are stuck in is beyond my comprehension.

BLM looters in Chicago have broken into a Tesla dealership. #ChicagoRiots pic.twitter.com/27cpocwWLB

But “chaos” is, of course, a big part of the left’s goal. It’s not just the looting these domestic terrorists crave, it’s not just the goodies — the socialist revolution demands chaos, disruption, agony, despair, inconvenience.

Gunfire rings out on the streets of Chicago during the #BlackLivesMatter riot overnight. Looters scatter the street. #ChicagoRiots pic.twitter.com/RWhCDpvu5N

Everyday Americans must be punished, must be made to suffer for our bourgeois sins — like just wanting to be left alone to enjoy the fruits of our hard work; just wanting to live a decent, quiet life…

For those wondering what Chicago’s Democrat  Mayor Lori Lightfoot focused on over the weekend as these terrorists were organizing, she was shaming young people — who are in no more danger from the coronavirus than they are from the flu — for going to the beach. 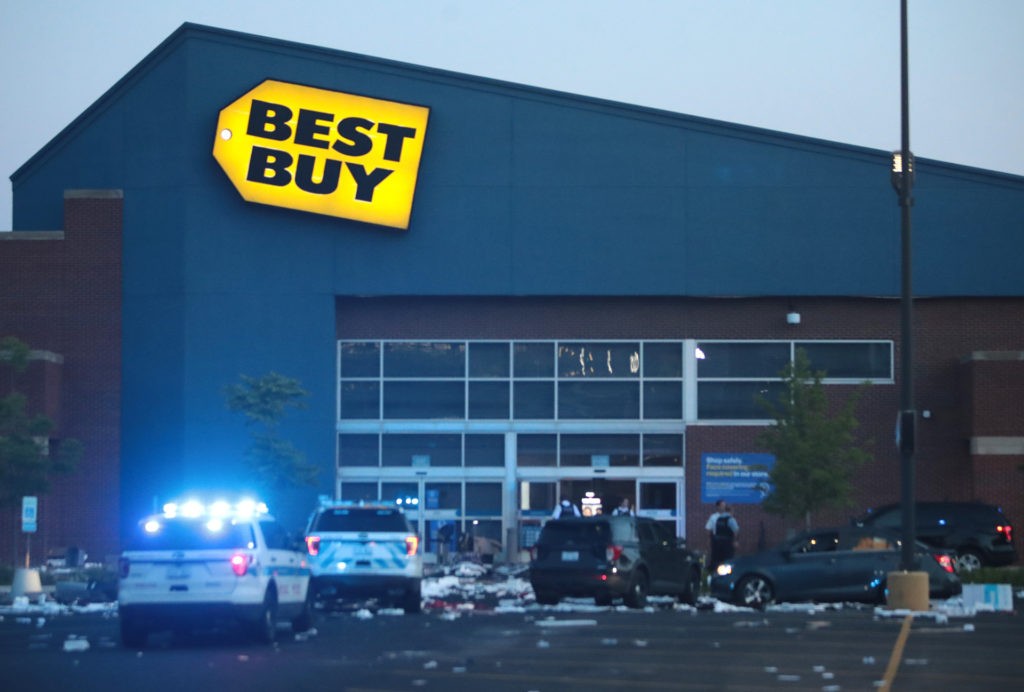 Police officers inspect a damaged Best Buy store after parts of the city had widespread looting and vandalism, on August 10, 2020 in Chicago, Illinois. Police made several arrests during the night of unrest and recovered at least one firearm. (Scott Olson/Getty Images)

Donald Trump: I Told You Democrats Would Try to Take Your Guns

In Pennsylvania, Undecided Voters Are Torn Between Faith And A Party That Was Once A Way Of Life 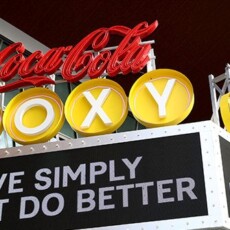