Fatherhood is a journey full of unforeseeable developments, but if you gather like-minded friends around you who can provide support along the way, and practise humility while learning how to best love and care for your family, you can triumph over the challenges which come your way.

“Life is strange with its twists and turns”, is a quote from a famous poem written in 1921 called ‘Don’t Quit’ by Edgar A Guest. For many years I had the entire poem pinned to my wall and drew great encouragement from reading it regularly. I have used the poem in the “Men in Crisis” article and another called Making Good Decisions.

But what does it mean, ‘Life is strange with its twists and turns’?

This is what Google said:

“Our entire life is like a journey on a road with many turnings. We have no idea what will happen next. It may bring good or bad things. In the journey of life we face new things, events, discoveries, surprises, successes and failures.”

One of the Dads4Kids founding board members had said to me many years earlier, “You should do something for fathers and families.” That conversation stuck in my head and often came back to me at the most unusual times. What were we to do, and how should we do it?

There was a very specific reason he said that to me. Everyone knew me as the Dad and band leader of the Marshes. We had recorded several albums and toured Australia and other parts of the world.

People loved us. Not so much for our music but because we were a family, that is, a mother (keyboards/vocals) and a father (guitar/vocals) who played music and sang with our five children. Four boys and a young daughter which was comprised of, in order, drums, bass, saxophone/didgeridoo, guitar and lead vocals/flute.

The attraction was not the music, but the fact that we loved each other and enjoyed playing music with each other. We actually loved being together, and it showed.

Everyone, as a result, presumed that I knew a lot about fathering and raising a family. That is why my friend said to me in the nineties: you should do something for fathers and families.

The truth was that I felt I knew very little about such things. At the time, I found it quite strange that people would look to me as an expert on family and fatherhood. In some ways I felt the least qualified, having grown up in a semi-broken family myself. The quote by Alexander Pope comes to mind, “Fools rush in where angels fear to tread.”

Since co-founding Dads4Kids in 2002, I have read hundreds of research papers and over thirty books on fatherhood and attended/spoken at dozens of conferences and written over a million words on the subject of fatherhood and families,

“Surely you must know a lot about fatherhood now, Warwick,” you say. I hate to disappoint you, but I take solace in the words of Aristotle, “The more you know, the more you realise you don’t know.”

Interestingly, I came across an article of the same title by Ardalis, a software engineer, writing about the danger of becoming over-confident when first learning about a subject.

Early on, in the first few years of Dads4Kids, I thought I knew a few things. Ardalis calls this the ‘Peak of Mr Stupid’. There is even a scientific name for this arrogant phase of learning. It is known as the Dunning-Kruger effect. 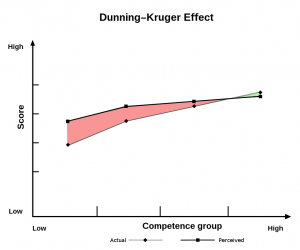 Relation between average self-perceived performance and average actual performance on a college exam. The red area shows the tendency of low performers to overestimate their abilities. Nevertheless, low performers’ self-assessment is lower than that of high performers.

The next stage of the journey is the ‘Valley of Despair’ according to Ardalis. Thankfully the last stage is called the ‘Slope of Enlightenment’.

We all know as fathers the stages of the Dunning-Kruger effect. We have all experienced the ‘Peak of Mr Stupid’ the ‘Valley of Despair’ and the slow upward ‘Slope of Enlightenment’.

However, being a father to a growing family means that the Slope of Enlightenment goes up and down sometimes. In fact, the Valley of Despair is often a reoccurring stage too. All part of those wonderful ‘twists and turns’.

So, what is the one thing I have learned about fatherhood and being a successful father to my family?

My answer to this one question is always the same. Humility!

Humility is a place somewhere between the ’Peak of Mr Stupid’ the ‘Valley of Despair’ and the ‘Slope of Enlightenment’. To enter that place you need total honesty and the help of other men.

As Robert Louis Stevenson said, “No man is useless while he has a friend”. The challenge is that total honesty can drive you to despair. That is why you need other men to pull you out of the Valley of Despair and on to the upward Slope of Enlightenment.

Simply, we need each other to find that true place of humility as fathers. We also need the input of these same men to stay humble. Our pride has to be challenged by those who love us enough to tell us the truth!

I meet with a bunch of guys for breakfast every Friday who share my passion for the things that matter. Find a way to get with other men on a regular basis who have a passion for family and fatherhood.

You will never regret it. As John Donne wrote, “No man is an island.”

Yours for the Upward Slope of Enlightenment,
Warwick Marsh

I encourage you to join us at the Men’s Leadership Summit, at the Tops Conference Centre on the weekend of 26-28 August 2022. 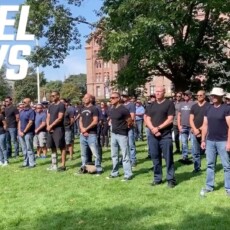 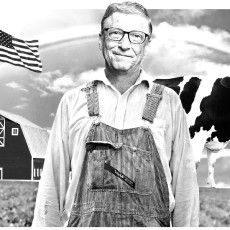 Bill Gates and the Uncertain Future of Food Security – PART 2