In the United States, the media barely mention Covid prior infections or the existence of natural immunity.

But a CDC-sponsored database in partnership with Yale, Harvard, and Stanford universities shows that the overwhelming majority of Americans have natural immunity from prior infections, Becker News can exclusively report.

The covidestim database is supported by a cooperative agreement with the CDC and the Council of State and Territorial Epidemiologists.

A Becker News analysis drawing on the state-by-state breakdown of prior infections data can be seen in this original graphic below: 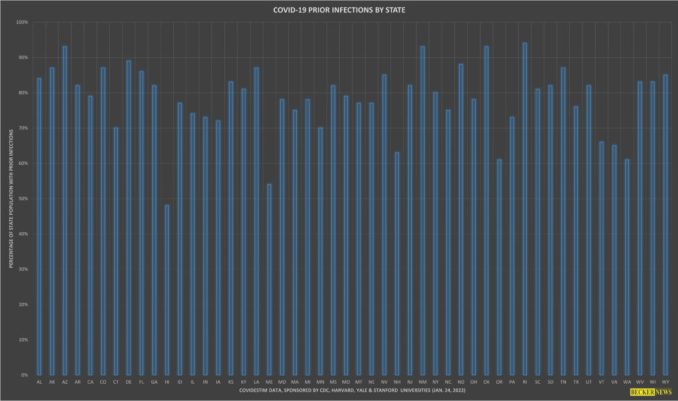 “During America’s last surge of the coronavirus driven by the Delta variant, people who were unvaccinated but survived Covid were better protected than those who were vaccinated and not previously infected,” AFP noted about the new study.

“The finding is the latest to weigh in on a debate on the relative strengths of natural versus vaccine-acquired immunity against SARS-CoV-2, but comes this time with the imprimatur of the US Centers for Disease Control and Prevention (CDC),” AFP added.

The U.K.’s Health Security Agency (UKHSA), issued a report that echoes much of the CDC’s findings on natural immunity. It showed that those with prior infections to Covid were much less likely to test positive for Covid infections than those in the vaccinated groups. 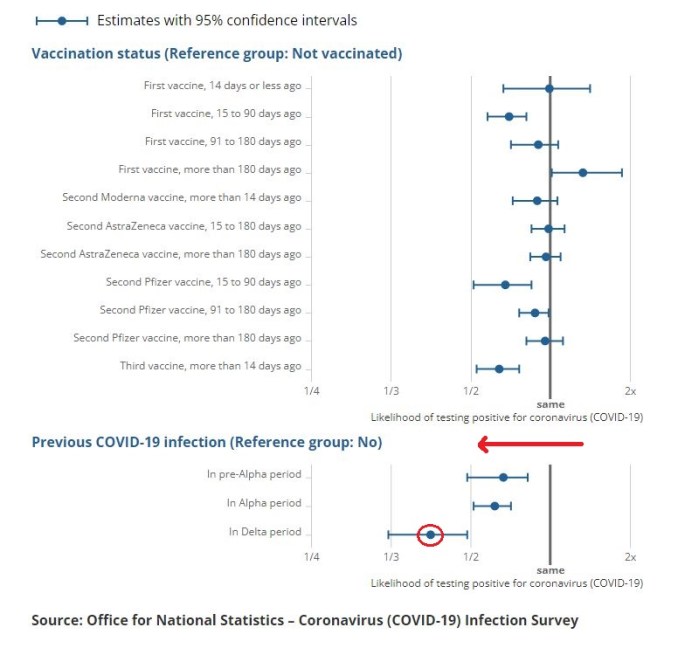 Those with prior infections even in the pre-Alpha period were tested to have natural immunity roughly equivalent to those with vaccinated immunity acquired from three shots.

The UKHSA report also showed that nearly the entire population of Great Britain has some form of antibodies to Covid-19. 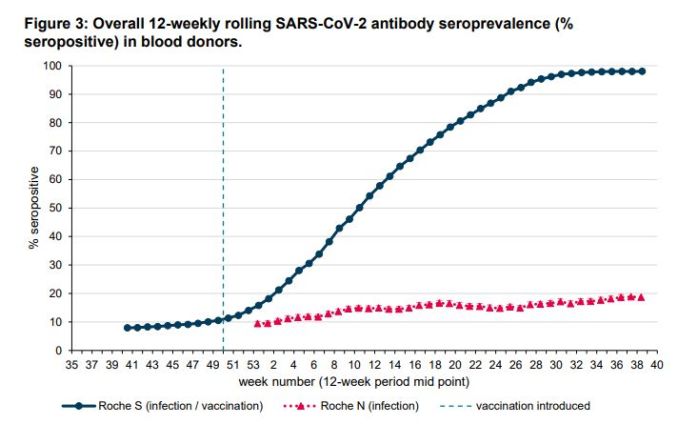 The CDC itself claims there have been 146.6 million prior infections in the United States as of September 2020. Based on its calculation and the current reported 72.9 million “cases,” this would put prior infections and natural immunity at an estimated 250 million to 280 million people (the CDC counts reinfections, particularly of unvaccinated Americans).

“Of those who reported whether they had a history of COVID-19, almost two-thirds (64.6%) of infections were in people who reported confirmed prior COVID-19,” Imperial College London noted. “However these results are based on self-reported data and therefore it’s uncertain what proportion of these are reinfections or recent infections picked up due to the sensitivity of PCR testing.”

The Africa Health Research Institute in December published a preliminary paper that showed people with Omicron prior infection developed natural immunity to Delta and related variants. The lead author in the pre-print study submitted for publication, Alex Sigal, spearheaded a team of over thirty researchers revealed the promising results.

“The increase neutralizing immunity against Omicron was expected – that is the virus these individuals were infected with,” Sigal noted. “However, we also saw that the same people – especially those who were vaccinated – developed enhanced immunity to the Delta variant. If, as it currently looks like from the South African experience, Omicron is less pathogenic, then this will help push Delta out, as it should decrease the likelihood that someone infected with Omicron will get re-infected with Delta.”

A study on natural immunity was published in the European Journal of Immunology in late December. The research showed that not only is natural immunity effective, it is superior to vaccinated immunity because it is longer-lasting.

The study’s results show the overwhelming majority of subjects received natural immunity from prior infection, regardless of whether the case was ‘severe’ or ‘mild.’ The researchers also sought to assess if natural immunity to certain variants of concern can be expected to protect against future variants.

“Previous infection with SARS-CoV-2 has shown to induce effective immunity and protection against reinfections in most individuals,” the study says.

“Most subjects develop antibodies to SARS-CoV-2 following infection,” the study added. “In order to estimate the duration of immunity induced by SARS-CoV-2 it is important to understand for how long antibodies persist after infection in humans... We found that NAb  [natural antibodies] against the WT virus [B-lineage variants] persisted in 89% and S-IgG in 97% of subjects for at least 13 months after infection.”

A study in nature immunology shows that children have an even more robust natural immunity response than adults.

“SARS-CoV-2 infection is generally mild or asymptomatic in children but a biological basis for this outcome is unclear,” the study’s authors state in the abstract. “Here we compare antibody and cellular immunity in children (aged 3–11 years) and adults. Antibody responses against spike protein were high in children and seroconversion boosted responses against seasonal Beta-coronaviruses through cross-recognition of the S2 domain. Neutralization of viral variants was comparable between children and adults.”

“Therefore, children generate robust, cross-reactive and sustained immune responses to SARS-CoV-2 with focused specificity for the spike protein,” the study notes. “These findings provide insight into the relative clinical protection that occurs in most children and might help to guide the design of pediatric vaccination regimens.”

Dr. Marty Makary, a professor at the Johns Hopkins School of Medicine, recently authored a powerful article on the “high cost of disparaging natural immunity to Covid.”

“Public-health officials ruined many lives by insisting that workers with natural immunity to Covid-19 be fired if they weren’t fully vaccinated,” Dr. Makary writes. “But after two years of accruing data, the superiority of natural immunity over vaccinated immunity is clear. By firing staff with natural immunity, employers got rid of those least likely to infect others. It’s time to reinstate those employees with an apology.”

“For most of last year, many of us called for the Centers for Disease Control and Prevention to release its data on reinfection rates, but the agency refused,” he added. “Finally last week, the CDC released data from New York and California, which demonstrated natural immunity was 2.8 times as effective in preventing hospitalization and 3.3 to 4.7 times as effective in preventing Covid infection compared with vaccination.”

“Yet the CDC spun the report to fit its narrative, bannering the conclusion ‘vaccination remains the safest strategy’,” he continued. “It based this conclusion on the finding that hybrid immunity—the combination of prior infection and vaccination—was associated with a slightly lower risk of testing positive for Covid. But those with hybrid immunity had a similar low rate of hospitalization (3 per 10,000) to those with natural immunity alone. In other words, vaccinating people who had already had Covid didn’t significantly reduce the risk of hospitalization.”

“Similarly, the National Institutes of Health repeatedly has dismissed natural immunity by arguing that its duration is unknown—then failing to conduct studies to answer the question,” Dr. Makary noted. “Because of the NIH’s inaction, my Johns Hopkins colleagues and I conducted the study.”

“We found that among 295 unvaccinated people who previously had Covid, antibodies were present in 99% of them up to nearly two years after infection,” he said. “We also found that natural immunity developed from prior variants reduced the risk of infection with the Omicron variant. Meanwhile, the effectiveness of the two-dose Moderna vaccine against infection (not severe disease) declines to 61% against Delta and 16% against Omicron at six months, according to a recent Kaiser Southern California study. In general, Pfizer’s Covid vaccines have been less effective than Moderna’s.”

“The CDC study and ours confirm what more than 100 other studies on natural immunity have found: The immune system works,” he concluded. “The largest of these studies, from Israel, found that natural immunity was 27 times as effective as vaccinated immunity in preventing symptomatic illness.”

It has become abundantly obvious that the mass media effort to downplay natural immunity from prior Covid infections is a deliberate strategy to tout the universal vaccination program at all costs. One is led to conclude from the historic levels of intellectual dishonesty that this agenda has less to do with Americans’ health than it has to do with politics. 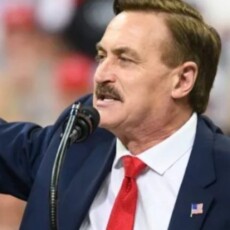 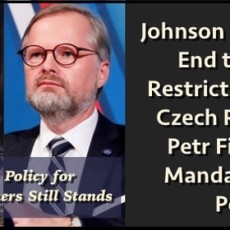