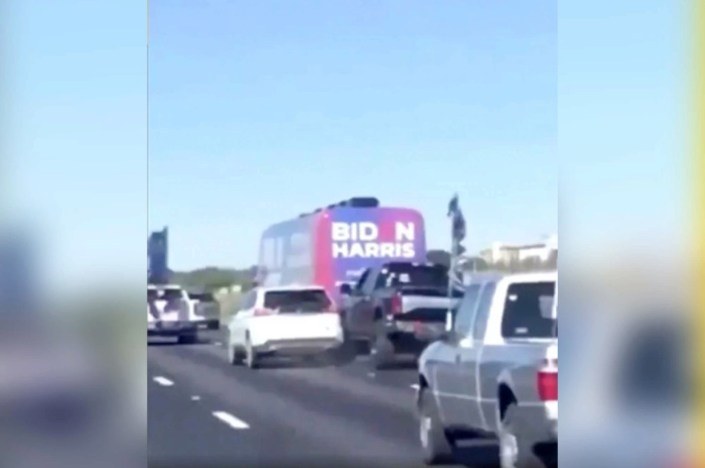 The San Marcos police department also said it has researched the crash and watched online video. It said the “at-fault vehicle” may be the Biden-Harris staffer’s car, while the “victim” appears to be the black Trump Truck.

“Where is the liberal corporate media’s concern about that real violence?” a statement from Texas Republican Party Chairman Allen West said in part. “It is more fake news and propaganda. Prepare to lose…stop bothering me.”

The FBI is investigating a “Trump Train” incident from Friday, in which a Biden campaign bus was surrounded by a dozen pickup trucks driven by Trump supporters as it traveled down a Texas interstate, according to a report.

The highway confrontation led the Biden campaign and state Democrats to cancel multiple Texas events in the battleground state, the Texas Tribune reported.

The FBI’s involvement was confirmed to the Tribune by law enforcement sources, the paper said.

“Rather than engage in productive conversation about the drastically different visions that Joe Biden and Donald Trump have for our country, Trump supporters in Texas instead decided to put our staff, surrogates, supporters, and others in harm’s way,” the Biden campaign’s Texas spokesperson told the paper.

But Allen West, a spokesperson for the Texas GOP, dismissed questions from the paper as “more fake news and propaganda,” in a statement that concluded, “Prepare to lose … stop bothering me,” the Tribune reported.

Texas congressional candidate Wendy Davis was on the Biden bus at the time it was swarmed, the paper reported. Friday’s incident had been promoted in advance online under the hashtag #FollowTheBus, the paper said.

“Trolling is Fun!” one post said. “Join us in #SanAntonio to escort the Biden bus coming through San Antonio.”

“We are on the bridges & will intercept at Walters/I35!!”

In all, some 40-to-50 vehicles participated, local Biden campaign volunteer Eric Cervini told the paper, describing the trucks decorated with Trump and American flags he saw gathered along the side of the interstate.

Joe Biden’s campaign canceled a Friday event in Austin, Texas, following a confrontation with a caravan of Trump supporters escorting his tour bus.

A Biden supporter filmed a conflict between a white SUV and a pro-Trump pickup truck along the highway behind Biden’s tour bus, suggesting the incident was an “attempted homicide” by the Trump supporter.

Now the Biden campaign and liberal media are claiming it was the caravan of Trump supporters who put Biden’s team in “harm’s way” despite the video footage showing the opposite.

“Rather than engage in productive conversation about the drastically different visions that Joe Biden and Donald Trump have for our country, Trump supporters in Texas today instead decided to put our staff, surrogates, supporters, and others in harm’s way,” Biden campaign’s Texas communications director Tariq Thowfeek told The Daily Beast.

This is a traffic violation and attempted homicide. Why hasn’t anyone been arrested? pic.twitter.com/QnfF4vXMQn

White car is driving illegally halfway into his lane as he’s pinned against the curb https://t.co/IxMoZvadEq

Another angle of the incident shows the SUV crossing into the right lane before colliding.

Nobody was hurt in the incident, but the white SUV appeared to suffer some damage.

This picture shows the white SUV in the truck’s lane https://t.co/XrptJlJYn5

GET THE HELL OUT! — Trump Patriot Team escorts Kamala Harris campaign bus out of Texas

Apparently, this counts as ‘signature match’ in Georgia…