The gloves are off Comrade Annastacia. Don’t bother sending the military back as promised on December 18.

Homeopath, naturopath and social scientist Sarah Baxter (above) has been working with the Yarrabah community(near Cairns) about health issues. With the assistance of residents she has documented the plight of those who have rallied against enforced jabs with the deadly mRNA concoction.

She said Yarrabah residents have been coerced, blackmailed and bullied into taking a medical procedure. They have been threatened not to speak out about deaths and injuries after the Covid shot.

Informed consent has not been sought and 300 body bags have been delivered to the community allegedly because of Aboriginal susceptibility to SARS-CoV-2.

“Community people have been told that anyone who does not get an injection will have to put a sign in front of their houses indicating they are a danger to their communities,” Ms Baxter said.

Legal action would be taken against Yarrabah Shire Council. Mayor Ross Andrews and CEO Leon Yeatman will be held accountable.

Agitprop, Dr Anthony Fauci Learns the Media Have Lost Control of The Narrative Needed to Protect Him 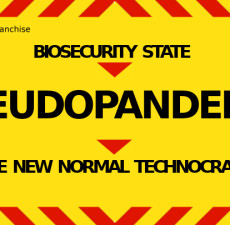