Jo Nash, in his article, writes:

“Firstly, the media are presenting cases and deaths in whole numbers that sound horrendous until you convert them to percentages of India’s huge population of 1.4 billion people…

Secondly, even as the alleged COVID deaths reach their peak more people die of diarrhoea every day in India and have done for years, mostly due to a lack of clean water and sanitation … [3].

Thirdly, Delhi, the focus of the media’s messaging, and the source of many of the media’s horrifying scenes of suffering, has the most toxic air in the world which often leads to the city having to close down due to the widespread effects on respiratory health [4, 5, 6]. This even led to Sonia Gandhi and her son Rahul having to flee the city in November 2020 … [7].

Fourth, high stake assembly elections are going on in some of India’s biggest states at present [8]. Delhi’s toxic air has been a political football for years…  blaming the soaring respiratory problems that require oxygen on a COVID surge skilfully diverts attention from the ongoing political neglect of this urgent public health issue.

Fifth, respiratory diseases including COPD, TB, and respiratory tract infections like bronchitis leading to pneumonia are always among the top ten killers in India [3]. These conditions are severely aggravated by air pollution and often require oxygen which can be in short supply during air pollution crises.

Finally, the Indian government’s focus on vaccine procurement risks diverting resources from tackling urgent public health issues including access to clean water, sanitation, clean air, and treatments for other communicable diseases. An article in the British Medical Journal reported on disrupted access to TB vaccinations due to lockdowns [10], with TB known to cause around 1.4 million deaths in the country annually.

According to my contacts on the ground, people in Delhi are suffering from untreated respiratory and lung conditions that are now becoming serious. I’ve also had breathing problems there when perfectly healthy and started to mask up to keep the particulate matter out of my lungs… My contacts have reported that the usual seasonal bronchial infections have not been properly treated by doctors afraid of getting COVID, and due to people’s avoidance of government hospitals out of fear of getting COVID.”

While correlation does not equal causation, most people I have spoken to do not believe this is merely a coincidence. Given the widespread availability of the data online, and anecdotal reports of adverse reactions and deaths, suspicions of the vaccination campaign remain. 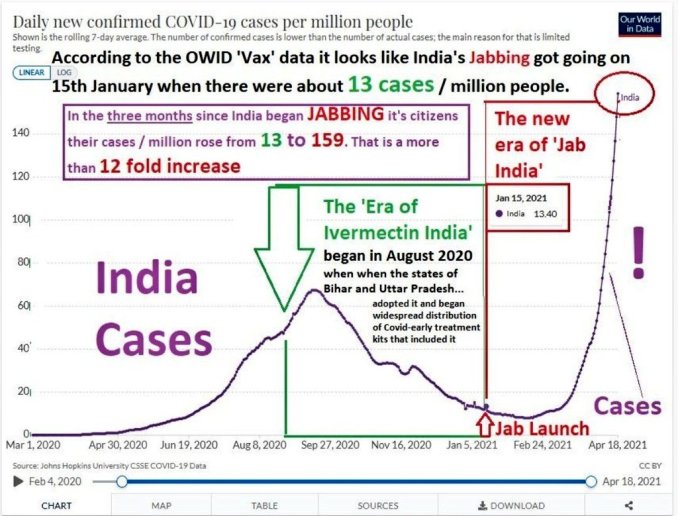 When we consider the current media coverage of India’s alleged COVID crisis in the context of the multiple factors presented above, clearly people’s concerns are not unfounded, and all is not what it seems.

Barron Bridge report too technical for motorists; one lane to remain on unsafe structure