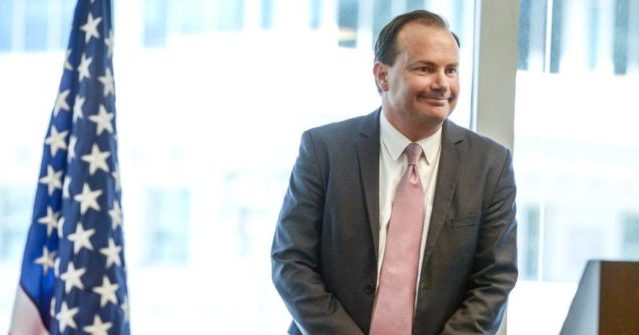 “That’s a game changer from the original bill,” said a tweet from a top ranking immigration lawyer Greg Siskind. It gives people “most of the benefits of a green card,” said Siskind, who is working with hospital chains to expand the pipeline of foreign nurses and doctors into U.S. hospitals.

Current law says migrants and foreign contract workers become Legal Permanent Residents of the United States once they get green cards and also become eligible to apply for citizenship and voting cards in five years.

Lee’s “Green-Card Lite” process gives foreign workers all those benefits expect a five-year path to citizenship, said Mark Krikorian, the director of the Center for Immigration Studies. Lee’s bill “grants de-facto green cards by other means — a stealth increase in legal immigration,” Krikorian said, even though GOP legislators say they oppose any increase in green cards.

The new legal status allows foreign contract workers “to be able to stay in the country legally, travel abroad, and change jobs while their green card application is pending,” said Leon Fresco, an immigration lawyer who helped craft the 2013 “Gang of Eight” amnesty and cheap-labor bill. Fresco is an ally of Sen. Richard Durbin, D-Ill., who endorsed Lee’s bill on August 5.

The new status “is a huge benefit of this amended bill,” tweeted immigration lawyer Elissa Taub, from Memphis, Tenn.

“This is a pretty fundamental change to the legal immigration system without anybody debating it,” said Krikorian. “It is a de facto increase in [legal] immigration — but presented dishonesty,” he said.

Section 7. Adjustment of Status For Employment-Based Immigrants – This is the other section that’s a game-changer from the original bill. It’s key because it offers rest of world applicants (and currently backlogged people) most of the benefits of a green card while waiting. 43

2) it allows all new applicants to have the same wait time for a green card and to be able to access “early filing” for green cards which allows everyone to be able to stay in the country legally, travel abroad, and change jobs while their green card application is pending.

Advocates for the legislation say it is intended to help India’s contract workers and their families get green cards so they can stay in the United States.

Much of the street-level lobbying for Lee’s bill is conducted by the India visa worker, while lobbyists for the Fortune 500 and the tech sector pushed legislators from behind closed doors. The legislation passed the House as H.R.1044 in July 2019 after a huge and secret lobbying campaign.

But advocates for Lee’s bill — including Lee’s office, Fresco, and the Cato Institute’s David Bier — declined to discuss the impact of the Green Card Lite language.

The Green Card Lite is created on page 27 of Lee’s S.386 legislation, which is also being presented as “H.R.1044 with the Lee amendment.”

The text says foreigners can get the Green Card Lite if they have to wait two years to get a green card after they are nominated by their employer. The bill says:

An alien … who has filed a [green card] petition or on whose behalf a [green card] petition has been filed for immigrant status … may file an application with the Secretary of Homeland Security for adjustment of status [to a legal resident] if such petition was approved not less than two years before the date on which the application for adjustment of status is filed … [and] shall be eligible for work authorization and travel permission.

Overall, Lee’s bill is designed to increase the flow of Indian workers into Fortune 500’s white collar jobs, because the only national group that needs to wait two years for green cards are Indians. Lee’s “Early Filing” rule was first mentioned during December 2019 negotiations with Durbin. But it was finally revealed August 4, just before the bill was denied Senate passage via Unanimous Consent by an August 5 objection from Sen. Rick Scott, R-Fla.

They are waiting because investors, Fortune 500 companies, and the Indian government together created a U.S.-India Outsourcing Economy, in which roughly 200,00o Indian graduates are imported each year to replace American graduates or to bring U.S. white collar jobs back to India.

The little recognized outsourcing economy keeps at roughly one million Indians legal and illegal workers in the United States. This population floods the white collar labor market and cuts opportunities and salaries for American professionals, so boosting stock values for American investors and sending roughly $80 billion in trade back to India.

Many U.S. CEOs prefer Indian workers because they are cheap — but also because they are compliant and cannot quit for another job. Their reduced legal status makes them much easier to manage and discard than a workforce of outspoken and mobile U.S. professionals.

Yet there is growing evidence this executive preference is shrinking the innovative workforce of U.S. professionals. This labor policy gives U.S. tech leaders more control over the high tech economy, but it also blocks innovative technologies and companies from getting to the U.S. market.

However, U.S. CEOs recognize their U.S.-India pipelines are now clogged.

The pipelines are clogged because Indian graduates in India know that they cannot get one of the 23,000 green cards that can be issued to Indians each year because the 300,000-plus Indian workers and their families have gotten into the lines ahead of them. New Indian graduates know they will likely have to stay with the same employer for decades — at a huge career risk — while they work and wait for delivery of the promised green card.

But Lee’s green card lite proposal will remove the backlog, clear the pipeline, supercharge the outsourcing – and smash the middle class that is the political base of the GOP.

The Lee bill lifts the pro-diversity “country caps,” so allowing the Indians to get a far greater share of the 140,000 cards issued each year.

The Lee bill creates the “Early Filing” process, which provides the Green Card Lite to an uncapped number of Indians each year. “They will be legal] immigrants at that point,” said Krikorian.

The Lee bill sets no limits on the uncapped number of foreign workers who can get U.S. jobs via the existing L-1 and H-1B visa worker pipelines, or via the universities’ “Practical Training” pipelines. The Lee bill does not set any cap on the number of Green Card Lite cards that can be won by migrants each year. Also, the Lee bill does create a requirement for companies to hire Americans who can do the job.

The labor pipelines also import many non-Indians — such as Filipino nurses and Chinese technical managers — into jobs around the United States,

The vast majority of these workers are college graduates, and most of them hope to win green cards.

But the inflow also includes thousands of people who are trying to get green cards by working in tough, blue collar jobs for very low wages. CEOs use these work-for-green-card people as meatpackers, chefs, home health aides, and in many other tasks.

More data re. the obvious: 2:1 majorities of Americans want fewer CEOs hiring visa workers #H1B & migrants in the economic crash.
That’s good for Trump’s team & bad for Biden’s team, so it gets minimal coverage by the powerless journos in estb. media. https://t.co/azheWrAYLH

Visa workers are accepting the prospect of compensation in the form of a [promised] green card, but it is uncertain. What this does is it makes it more predictable when they are going to get permanent residency. In a sense, the value of the [promised] immigration benefit is increased [by Lee’s predictability], which potentially could allow employers to reduce the actual [cash] pay.

Rosemary Jenks, the policy director at NumbersUSA, said Lee’s bill would worsen the claimed problem of too many visa workers competing for the annual supply of 140,000 employer-provided green cards:

The [Green-Card Lite] legislation will make the problem worse … [because] it is basically turning a temporary visa into a permanent visa, and once you do that, anyone here on that visa will claim a right to say permanently.

This is an absolutely unprecedented change … This undermines the entire purpose of guest-workers. The whole claim of guest workers is that the employer can’t find an immediate person, so someone else can take the job from abroad [temporarily] while an American is trained, graduates or moves. This blows that out the window and says these jobs will be gone from Americans permanently.

The legislation is supported by officials at the Department of Homeland Security. It has not been denounced by the White House, or even by President Donald Trump’s deputies on Capital Hill.

“It is entirely possible [GOP legislators] have no idea” what they are doing, said Krikorian, who added:

This exemplifies the whole process of making immigration policy. That’s the way immigration policy has been made, where people from both parties join with special interests behind closed doors and nobody really notices until it is too late.

It is harder to do in other issues because there are always lots of well-funded lobbies and experts on either side of many issues, whether it is military questions, tax policy, or environmental policy. On immigration, all the money is on the same side — the side of more, more and more. So this kind of backroom policymaking is a lot easier to pull than it is in other areas of government activities. 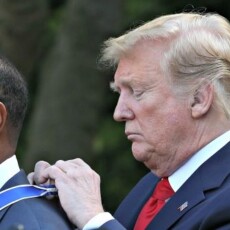 Trump on Tiger Woods: ‘He’s Going to Be Back — I Have No Doubt About It’